Impressions are of a sector which is becoming increasingly upbeat, notwithstanding the many challenges facing it – not the least that less than 25 percent of Africa’s approximately 900 million population have access to electricity, and that existing power systems are stretched to their limits. New power sector developments are emerging across the continent – increasingly as regional projects – and sustainability issues, driven by climate change, as they are globally, are top of mind in these.

“Africa is on the move,” said the World Bank’s vice president for the Africa Region, Gobind Nankani, recently. “The last ten years have seen renewed growth and improved governance across a number of African states, setting the stage for taking advantage of opportunities that are emerging from a rapidly changing world economy.”

PREPAYMENT
Prepayment – at least in its modern form – had its origin in South Africa and has been widely adopted there over the past 21 years. However, with increasing penetration the market has slowed down, prompting vendors to look for other markets, and a result is what has turned in to a massive growth in prepayment in countries across Africa, from south to north and east to west. 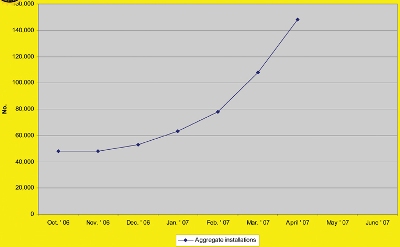 In Nigeria for example, prepayment is being introduced not just as a normal industry strategy for revenue protection, but as a critical and strategic national project (NPPMP), Uzoma Achinanya, market operator of the Power Holding Company of Nigeria, reported. Electricity access in Nigeria is estimated at 40 percent, but there are only about 4.5 million connections – suggesting an average 12 consumers per connection – and of these connections around 25 percent are not metered and have estimated bills and 40 percent of the meters are old or obsolete. Moreover of the consumers who are billed the payment rate is only around 40 percent. As a result energy and revenue losses are significant and it was to combat these losses that prepayment was selected.

The rollout, which started in March 2007, calls for more than 2 million prepayment meters to be installed across Nigeria over the next two years, of which about 1.8 million will be to existing customers and the remainder new connections. In pilot projects two technologies were tested, a keypadbased system from South Africa and a smart card-based system from China, and the former technology has been chosen for the full project, with the proviso that systems will be interoperable, under a unified national vending system.

Recharging prepayment credit on
a smart card in Morocco

Another example is from Morocco, in which prepayment is being introduced into the country’s rural areas by the Office National de l’Electricité (ONE). With an electrification rate of 91 percent in the rural areas, the challenges, according to Imad Barrakad, regional director at ONE, were to improve the quality of services to customers in terms of payment for electricity and control of consumption, and to improve the distribution costs for ONE, in particular by reducing the need for bills and the collection of overdue payments.

To date approximately 350,000 customers have signed up to the prepayment system and the aim is to expand it to all 1.5 million rural households by 2011.

PREPAYMENT WATER
Operation Gcin’amanzi (‘Operation Conserve Water’), Johannesburg Water’s prepayment project in which so called ‘freepay’ meters – i.e. prepayment meters which also dispense a free water allocation – are being installed in Soweto, is believed to be the only prepayment water project, certainly in sub-Saharan Africa, if not in Africa as a whole. Its results, presented by City of Johannesburg Infrastructure and Services Department programme manager Kathy Eales, are noteworthy.

Operation Gcin’amanzi promoted
in the community

Aims of the project, which also involves a range of other technical and social actions including the renewal and repair of pipes and water connections, are to reduce the level of non revenue water and to improve revenue collection. To date some 69,000 meters have been installed in a planned total rollout of 170,000 meters, and more than 44 billion litres of water with a value of US$18 million have been saved. In addition sales of water have been made of US$2.5 million, and household consumption has dropped from an average 66.6 kl to 10.5 kl.

THE RURAL ELECTRIFICATION CHALLENGE
Rural electrification is a challenge in most countries of Africa and Roland Hill, chief engineer at Circuit Breaker Industries, put forward a proposal for a cost effective rural smart meter with multi-service capabilities and advanced revenue assurance and debt recovery features. By resisting inappropriate technology traps, and including low data rate communications such as SBS/PLC and LIN, appropriate systems which meet customer needs may be defined.

BILLING AND CUSTOMER SERVICE
Even in the billing and customer service track prepayment featured strongly, and the installation of prepayment meters to replace conventional credit meters was one of the strategies introduced by the Lesotho Electricity Corporation to improve revenue management, Mrs Keketso Thulo, LEC’s customer manager, reported.

Other strategies in the programme, which was started in 2001, have included a statistical metering and meter mapping exercise, the replacement of conventional maximum demand meters with programmable electronic meters and comprehensive meter auditing for large power users. In the case of the latter, out of 101 customers audited 27 were found to be under-billed and 2 over-billed, at an annual cost of about $1 million.

While prepayment has generally been deployed in South Africa as a loss control measure for non-paying customers, it is also now becoming more widespread. In Cape Town, for example, prepayment is now mandatory in all new housing developments and householders may opt (at a nominal cost) for the technology to replace an existing post-pay meter. But a major challenge has arisen, as a result of changing municipal boundaries, in needing to integrate four different historic proprietary systems into a single system.

Based on this experience, Hoosain Essop, vending manager for the City of Cape Town, discussed the challenges of multi-utility billing and vending systems. The key considerations pertain to finance, production, administration, marketing and personnel, and partnerships with suppliers are essential.

SOME OBSERVATIONS
From the presentations and discussions with delegates to Metering Africa, a couple of observations arise. The first is on prepayment electricity, and its expansion into Africa suggests two major challenges. One of these is skills transfer and with the primary knowledge base residing in South Africa, and much of the technology coming from there, there is a need to ensure that the skills are transferred to enable the recipients to manage and maintain their systems to get the most out of them.

The second concerns the meeting of the demand for prepayment meters by the manufacturers and for example, Nigeria’s prepayment rollout has a monthly demand of approximately 80,000 meters per month to ensure that the delivery target is met – and that is just one country with a major rollout. The second observation pertains to prepayment water and so far we are aware of only one other country in Africa, Rwanda, which is seriously investigating water prepayment, with plans to have two small pilots in place before the yearend. It has been well documented that one of the outcomes of electricity prepayment is a wider awareness of energy and energy saving, and the results from Johannesburg Water’s project would suggest that prepayment water has the potential to do for water conservation what prepayment electricity has done for energy conservation. With much of Africa being waterstressed, this is all the more significant.

Ed’s note: ‘The climate crisis is here – and no country or region is immune’