Electrogaz has had a policy to introduce prepayment electricity metering since 1995. The first prepayment system, which was introduced in July 1995, comprised 500 single phase prepayment meters with magnetic cards. In the second phase of the project between February 1996 and November 1999, 14,000 (12,500 single phase and 1,500 three phase) numeric token-based prepayment meters were installed. These prepayment meters, using the Landis+Gyr proprietary CTS (Cashpower Transfer Specifications) algorithm, were managed with the Prima management software from Landis+Gyr up to December 1999. At that time a system upgrade was introduced, including an upgrade of the Prima system to Prima Plus, which was both Y2K and STS compliant, and opened the way for integration of STS compliant prepayment meters from other suppliers into Electrogaz’s electricity system. As of 2005, at the time of launching the upgrade, Electrogaz had approximately 40,000 prepayment customers. 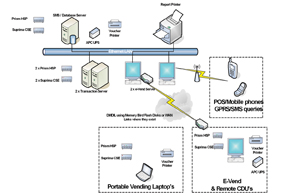 PROJECT AIMS
Electrogaz has 85,000 electricity customers across the country, including 50,000 in Kigali and 35,000 up country. Rwanda covers an area of 26,340 km2 and its population numbers approximately 8.5 million. The objectives of the prepayment system upgrade were two-fold. On the one hand it was required to phase out the last conventional meters in Kigali and expand prepayment across the country, and on the other to implement modern, state of the art software with advanced functionalities and technological features, such as Internet and mobile solutions, to improve revenue collection and customer services.

In July 2005 an initial submission for funding was made to the World Bank through the Competitiveness and Enterprise Development Project (CEDP) under Rwanda’s Ministry of Commerce. Following its acceptance a tendering process was then embarked upon for a new prepayment system of 18,000 prepayment meters, which resulted in contracts to Conlog for the meters and to Landis+Gyr for its Suprima version 3 system, as well as to Connect Africa Technologies to undertake the system implementation.

The architecture of the new system is shown in Figure 1. The Suprima system comprises eight servers (2 System Master Stations, 3 transaction servers, 3 E-vend servers), 8 management stations, 57 E-vend (online) stations and 37 CDU (off-line) vending point licences (CDUs), and mobile telephones. These provide national coverage with both online and offline configuration, and a facility for differential/stepped tariff per customer category. The system was commissioned in October 2006, with configuration of both online and offline Suprima vending licences in each of Electrogaz’s outlets, with a subsequent upgrade to support the high system demand and growth.

OUTSOURCING OF SALES
The outsourcing of prepayment sales was launched in December 2006 to sub-vendors or “dealers”, including shops, supermarkets, tele-centres, cyber cafés and petrol stations in a 3-month pilot project. The system comprises two levels of dealers and superdealers. These dealers are provided with laptops with a high speed Internet connection and mobile cell phone SMS querying, and they are required to make a bulk purchase of electricity – a minimum amount currently of Rwf5 million (US$9,100) – which they then resell to their customers. When this is exhausted and they apply for a re-purchase, they are paid their commission on the previous sales. As the system is online, Electrogaz is able to monitor sales and credits.

Two super dealers – Pivot, a local ICT company and SMS Media, a local media content provider – have also been contracted. They are installing their own systems to provide mobile vending using mobile phones and POS terminals. These super-dealers have a higher commission structure and are currently at an advanced stage of implementing their systems.

At the same time as the launch of the outsourcing pilot, a 3-month education and marketing campaign was launched for the public, with adverts on the radio and TV, the publication of information brochures and holding of events. Electrogaz also adopted the motto “With the prepayment system, you save your time and money, you enjoy the new technology!”

Subsequently the installation of prepayment meters has been speeded up, with the aim of supplying prepayment to all customers, including new connections. A further tender for 10,000 prepayment meters was announced in February 2007 and the tender for an additional 10,000 meters is in preparation (Figure 2). Currently prepayment meters in the Electrogaz network include Actaris Taurus Tsk and Taurus Isp+, CBI Ecolec 570, Conlog BEC23PL, BEC32P, BEC33P, and Landis+Gyr Cashpower 2000 Big Box, Sabre ECU.

IMPACT
Customers have indicated that they like prepayment as there are no accrued debts and account problems, there is better control of consumption and budget, and better utility relations, as they can purchase their electricity at any place far or close to their location. It has also provided creation of employment and revenue enhancement through the vending outsourcing for the fixed dealers and mobile vendors, ease of management, monitoring and control with the system online, and improved cash flow through the bulk purchasing scheme (Figure 3).

The upgrade project described above received the Prepayment Innovation Award in the project category in 2007. Electrogaz believes that prepayment is a key to improving both service to customers and revenue collection. Such has been the success of the electricity prepayment project that the utility is now embarking on an investigation and pilots for prepayment water meters.