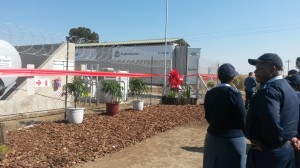 Meter manufacturer Conlog will provide wireless prepayment electricity units to the African project aimed at giving a community in the Free State province access to power.

The wireless meters provided are based on a 20-digit standard transfer specification (STS) token system, available to buy from the local municipality.

Using Conlog’s meter data management system – Iridium –  data will be communicated wirelessly to and from the meter via data concentrator units connected to a suite of management tools at the head-end.

Commenting on Conlog’s level of involvement in the project, Mr Surujdeen said: “Conlog also monitors the entire site and allows remote management of the metering devices.

“Services provided by us include a 24/7 uptime guaranteed, automated maintenance and backups, secure transactions securely via a dedicated APN, and a service desk and support.”

The project to electrify Naledi Trust, a small rural community of 34 homes near Kroonstad, will use a mini grid powered by fuel cells and claims to be the first of its kind in the world.

The system is integrated into a power generation system that includes batteries, DC/ AC inverters and controls.

He added: “Fuel cells can also produce electricity whenever the demand exists. Importantly, switching on with fuel cell power is safe and healthy compared to hazardous wood fires or paraffin stoves, and improves rural lifestyles by reducing food waste through refrigeration and eliminating the use of candles for lighting.”

Surujadeen commented that approximately 20,000 schools and clinics in remote rural areas of South Africa lack electrification due to the significant cost of extending existing grid power.