2007 marks the 21st anniversary of the first commercial solid state prepayment meter – the work of two South African entrepreneurial engineers, Don Taylor and Rudi Coetzee. The development took place in their homes over the course of a year as they held down their jobs at the time, and in the subsequent years the technology has found increasing application across the world.

It all started in 1985 in the then homeland of Qwa Qwa, which had embarked on an electrification programme, but soon experienced difficulties in the billing and cash collection processes from a population that didn’t understand the concept of payment of services, and rapidly mounting bills that were spiralling out of control,” says Taylor.

Interestingly he says, the Qwa Qwa Development Corporation had identified prepayment as a potential solution and had sourced a meter from a manufacturer in the United Kingdom. However, as it was one of the earliest models with a magnetic card reader, it was not only costly but also bulky and cumbersome as well as easy to defraud. And thus was born the decision to develop a solid state meter, with all its components integrated into a single box – a development to which Taylor says he devoted four hours in the early morning and four hours in the evening every day, before and after his daytime job – over the better part of a year, leading to the first production prototype in late 1986.

“The biggest effort went into the metrology, which was an enormous challenge to build as the components couldn’t simply be bought off the shelf at that time,” says Taylor. Due to the extreme sensitivity of the trans-conductance multiplier principle chosen, the individual components had to be kept in a temperature-stabilised oven. In contrast, he comments, the microcontroller and card reading aspects were relatively straightforward.

Subsequently however, large cost reductions have become possible with the integration of many of these components onto a single chip – the Intel 8051 becoming the industry standard – while much of the cost saving today is being realised in the power supply due to the low power burden requirements. This means that simple reactive capacitor-dropper designs can be used very cost effectively.

Another component that has undergone significant technological development, particularly by Gruner in Europe, is the load control switch used in the prepayment meter. Initially a relay was used that required about 7 VA to hold it in the closed state, but this was uneconomical and its longterm reliability was also in question, so a passive shunt-trip breaker switch was introduced in 1989. This in turn was later replaced by a magnetically latching relay, which today has advanced to the level of mechanical integration with the rest of the meter parts, providing large cost savings and optimisation of internal heat dissipation.

The manufacture of the magnetic cards themselves was also a challenge and Taylor recalls that the first cards were made by encoding and pasting by hand a strip of audio tape, and later digital tape, to the card. At that time the automated bank teller machine was also being developed and a card programming unit was sourced from that industry. Subsequently a heat adhesion process was used for the strip and thereafter a machine that was being used to produce tickets for the transport industry was used for the card production.

“This enabled us to move the card production from the hundreds to the thousands,” Taylor says. With the completion of the prototype, a company, Angcon Technologies, was registered to produce and market the prepayment meter. By the end of the following year (1987) a factory had been established in Atlantis, a town about 40 km outside Cape Town, and the first order had been received – for 10 meters from the Thabong Municipality. This was followed soon after by a second order for 60 meters from the Witrivier Municipality.

By that time also both Taylor and Coetzee had given up their previous jobs to concentrate on the prepayment development full time – Taylor concerned principally with the technical aspects and Coetzee with the marketing. During the development phase Taylor had approached the national utility, Eskom, to use its calibration facilities. This resulted in growing interest in prepayment within Eskom, to the extent that when the utility embarked on a 10-year 5 million home electrification programme in 1989 it saw the technology as the solution.

Following a tender process the first national order was awarded to Angcon for 6,000 meters, for installation in Kwanobuhle outside Port Elizabeth. “This was the beginning of the big dream,” Taylor says, commenting that at that time the maximum factory output was just 300 meters per month. The process also had the effect of kickstarting the prepayment industry in South Africa, with several new suppliers entering the market. Among these were Conlog and Spescom, which also received contracts from Eskom, and Plessey Tellumat, which concentrated on the municipal market.

However, this also gave rise to a new issue. By 1993, with approximately one million meters in the field based on a number of proprietary standards, all incompatible with one another, Eskom started experiencing severe operational problems. In order to overcome this, the utility decided to initiate a standardisation process by forcing co-operation between the vendors. From this effort the Standard Transfer Specification (STS) was developed that essentially ensured interoperability between meters from different vendors and also with token vending equipment from different suppliers, while also introducing a high level of security using banking standard encryption techniques.

As part of this standardisation, Eskom also forced the development of a ‘standard base’ in order to permit plug-in compatibility between meters from the different vendors and to make the installation and maintenance process easier to manage. “This was a major industry milestone,” says Taylor, adding that it also forced the vendors to compete on “excellence rather than lock-in.” Following South Africa’s joining of the International Electrotechnical Commission in 1994 the country initiated a work item for the creation of IEC standards for prepayment systems.

This in turn led to the founding of WG15 of the IEC’s TC13 and the result that today the STS is an international standard (under the IEC 62055 suite), which defines a magnetic card token and a numeric token format – the numeric token having become popular due to the fact that it is easily distributed over commercial-standard channels like mobile phones, SMS and the Internet. The numeric token is basically an encrypted 66-bit value comprised of various codes that prevent using the same token more than once and a code representing a credit value, and is normally printed in a 20-digit decimal number format, which is entered into the prepayment meter using a keypad.

Meanwhile other changes were taking place and in 1990 the finance partners of Angcon sold their share to AEG Germany. This resulted in the company name change to AEG Energy Control and what proved to be a major step forward with the new technical expertise that became available – much of the effort following the first installations having had to be put into solving the technical shortcomings that arose. “One of most severe development challenges pertained to the hostile environment to which the meter is subjected,” 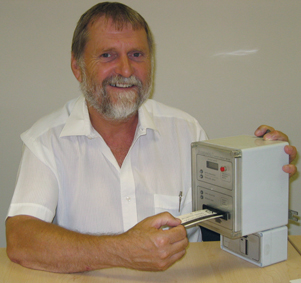 Taylor says. “Extreme temperature variations, rain, wind-blown sand and dust, insects and network surges and interference all had to be overcome and although these are all well understood now, it required a long learning curve.” A further step forward in improvement in product quality occurred following the take-over by Schlumberger of AEG’s worldwide metering business in 1994, while the most recent management change occurred in 2001 with the management buy-out of Schlumberger’s worldwide metering division and the creation, as a global entity, of Actaris Measurement and Systems (the local company becoming Actaris South Africa).

With the increasing penetration and consequent slow-down of the South African market, vendors were obliged to look for alternative markets and Taylor says he suspects that the first exports of prepayment meters from South Africa occurred during the late 1990s, most likely to one of the South American countries, either Argentina or Brazil. In the subsequent years a number of projects have also been initiated in the Middle East and Asia-Pacific regions as well as elsewhere in Africa among others, but so far nowhere yet on the scale of South Africa.

Thus Taylor estimates that with almost 6 million prepayment meters in South Africa and maybe 2 million in the rest of the world, there are a total of around 8 million (oneway) prepayment meters deployed globally.

However, Taylor sees significant growth in the years ahead, saying that for example the South American countries are currently at the stage where South Africa was between five to ten years ago, “on the verge of the wave.” “Many of the current deployments are regulator-driven and utilities are only slowly starting to see the benefits of prepayment. But I believe that in the next 5 years the global market will be about 1 million prepayment meters annually.”

At the same time an increasing number of manufacturers across the globe are also joining the STS Association – a not-for-profit association that supports the STS standard – which is further indicative of the ongoing activity in the market. Looking forward Taylor says that developments currently under way include the inclusion in the meter of a real-time clock and two-way communication functionality, and the development of multi-function and hybrid meters.

These will open the way for time-of-use and other more sophisticated tariffs, and applications such as demand side management and automatic meter reading. Commenting that meters are already available that can be switched between prepayment and post-payment modes, Taylor says that the advent of deregulated markets has challenged the traditional thinking around prepayment and that the technology is evolving from simple to more complex functionality.

“Prepayment metering has shifted the traditional meter from a utility-focused billing point to a customer-focused service delivery point, thus bringing in a strong element of customer interaction. The technology has become well established in the ‘budget’ segment of the consumer market and is undoubtedly here to stay, and the trend is towards more complex functionality and facilitating a wider range of service offerings to a more sophisticated user in the future."