By Burkhard Beyer and Roland Bicker

The long-wave broadcast radio ripple control system is operated by EFR Europäische Funk-Rundsteuerung GmbH, with headquarters in Munich, Germany. The system has repeatedly proven its worth as a more economical alternative to conventional ripple control methods. Unlike ripple control systems that rely on the distribution network for communication, the EFR system uses long-wave radio signals as the communication channel for transmitting commands to the terminal units for tasks such as triggering switching actions (see Smart Energy International, Issue 3 2008, page 88).

This network independence provides several advantages. For one thing, this type of ripple control is immune to any network disturbances that may occur and thus more robust than audio-frequency ripple control, which has been used for many decades. In addition, the amount of technical outlay necessary for communication with many receivers is extremely low. This results from the fact that any desired number of receivers can be installed within the range of the transmitter without increasing the transmitter infrastructure cost. In addition, radio communication can be used to address receivers that are not installed in the user’s own network region.

RADIO RIPPLE CONTROL IS FAST AND ROBUST IN OPERATION
Another advantage of radio ripple control relative to networkbased technologies is its short response time. Urgent commands are transmitted only a few seconds after they are generated and reach the radio receivers via the long-wave radio signal. The receivers can be addressed directly without any intermediate stages, which means switching actions are carried out quickly. 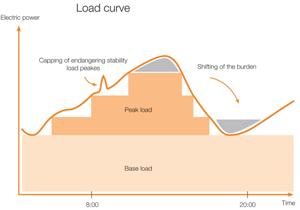 NECESSARY HARDWARE COMPONENTS
Four components are necessary for operating a radio ripple control system: an operator station at the user site where programs or commands can be generated, a central computer that receives and manages customer commands, a transmitter system, and one or more radio receivers. The user of the radio ripple control system only has to purchase an operator control unit, such as a PC for using the password-protected browser front end or a PC-based solution with specific application software, and the radio receivers. The receivers come factory-equipped with an integrated timer module and programmable memory so they can independently execute repetitive routine tasks. This independent operational capability means that commands only have to be transmitted when it is necessary to reprogram the receiver or perform isolated switching operations, which drastically reduces the volume of transmitted data. The time code transmitted by EFR several times per minute enables synchronisation of the timers in the receivers and ensures perfect timing in the independent operating mode.

As the service provider, EFR is responsible for the infrastructure (the central computer and the transmitters). It looks after the transmitter equipment, the leasing of protected transmit frequencies, and the operation of the central computer. In addition, EFR’s sophisticated addressing system ensures that the users of the radio ripple control system can address their own meters, either individually or in groups. The system, including the addressing scheme, is designed for inherent multi-client capability, which makes it possible to achieve additional cost benefits. For example, several electricity providers or network operators can share the infrastructure.

TARGETED LOAD MANAGEMENT AVOIDS BLACKOUTS
The immediacy of the radio ripple control system enables load management with a short response time. For instance, if overloaded network segments are detected in the network control centre, network failure can be prevented by load shedding. For example, service agreements with electricity customers can include provisions that allow high-power loads, such as air conditioning systems, freezers, electric water heaters and similar equipment, to be disconnected briefly from the network. As a service outage of only a few minutes with such equipment usually does not have an adverse effect on user comfort, this can easily be implemented if suitable contractual provisions are in place.

LOAD MANAGEMENT HELPS REDUCE COSTS
An important aspect of load management is staggering the times when the loads are brought back on line after a load peak, in order to avoid new load peaks due to start-up currents. This is easily possible thanks to the ability to address groups of receivers. Alternatively, the receivers can be programmed with an internal command that causes them to revert to normal operation at a specific time. Radio-based load management can thus reduce peak loads and smooth out power demand. In addition to the benefits for network operation, this means that purchases of expensive peak load power can be reduced.

Load management requires the ability to switch load equipment on and off via the radio ripple control receiver. As modern receivers have several relay outputs and the current generation of receivers uses especially compact receiver and antenna modules that can be manufactured inexpensively, installation of such receivers in the household environment is quite feasible, both technically and economically. Despite their compact dimensions, these devices can receive the long-wave radio signal at a distance of up to approximately 482 kms from the transmitter in normal installation situations and under typical geographic conditions.

REDUCING NETWORK OVERLOADING BY DISTRIBUTED INFEED SOURCES
Network operators can also experience network overloading on the infeed side. If the network cannot accept any more power from distributed generating units, such as wind power systems, radio ripple control can be used to throttle back or even disconnect these generating units. For both load management and infeed management, the short response time of the radio ripple control receivers, which is in the range of a few seconds, makes it possible to avoid network collapse situations and increase network stability without requiring any additional investment in the actual power grid.

SMART METERING WITH SUPPLEMENTARY BENEFITS
Smart metering solutions based on radio ripple control inherently provide one of the basic functions of intelligent metering technology, since the meters can be switched via the long-wave signal and information can be provided to customers by using an integrated display or a remote display driven by the meter. For example, this could be used to call the attention of electricity customers to special tariff periods so they can operate their high-power equipment during periods of low network utilisation (stimulus management).

If a return channel is also incorporated in the system, radio ripple control can even support two-way communication with electricity customers and the transmission of meter readings. The options for implementing the return channel include powerline communication, the mobile telephone network, the regular telephone system, and the Internet. An example of an application for this is load reduction. Instead of contacting customers by telephone and asking them to voluntarily switch off equipment, the end users could be informed via the EFR system. Their agreement to reduce the load would be sent back via the return channel, and the electricity meter would register the actual implementation of this measure. The electricity supplier could generate a credit note if the consumption drops below a certain limit. An Internet link would additionally enable electricity customers to check their current consumption, credit notes, average consumption, and much more – all online. As a result, it would give customers an additional stimulus, independent of the agreed tariffs, to encourage them to reduce their power consumption during high-load periods.