INTRODUCTION
With the prospect of long lasting global financial and economic turbulences for the next two years and with the renewal of the concession contract for the coming years, Companhia De Electricidade De Macau (CEM) has to find strategies and action plans to cope with the coming challenges. One of these strategies is the introduction of Automatic Meter Management (AMM). The C&I customers’ AMM was already successfully implemented on July 2001 and CEM is about to complete an AMM pilot project of 1,000 residential and commercial customers. In this article we are going to talk about the residential and commercial AMM (RCAMM), which will be referred to as simply AMM hereafter. As we know, for this type of project, usually there are important drivers in terms of cost justification, and less important ones. The Macau environment also includes both positive and negative factors or drivers which will affect the viability of our AMM. Most of the drivers found in other AMM projects and countries are not strong enough in Macau. A long list of issues such as safety, high manual meter reading costs, a high level of meter fraud, low density areas, a low level of daily meter reads per meter reader, a high number of ‘hard to read’ locations, a high rate of meter re-reads, an inefficient read to bill time, a high level of occupancy turnover, etc do not work in Macau at all. But if we can prove that some drivers have an important role and are able to be confirmed (for instance, the non-technical losses, the prepayment solution, the usage of a reliable Power Line Communication (PLC) network at low cost and some other value-added services and technologies), then we can surely justify the Macau AMM in terms of costs and secure a shorter payback period for the project.

The AMM pilot project was split into three parts and delivered to three suppliers (each one integrating 330 customers) utilising different solutions and technologies. The three solutions have the same architecture that is considered the most suitable for Macau. We believe the solutions we are working on are cost effective and include many features considered essential by CEM, to meet our needs for some years to come. One of these solutions is the magic word – PLC (Power Line Communication).

THE PLC EXPERIENCE IN CEM
Until recently, most of the AMM systems and homes’ and buildings automation was realised through systems which need a special transmission medium, such as s pair of twisted wires, coaxial cable or optical fibre. Recent technological developments led to power line medium equipments which send and receive information with some reliability. The main advantage of a PLC system is that the physical medium is already installed, making it an attractive alternative in all buildings without pre-routed data infrastructure, like historical buildings or brief local data networks. Due to this existing infrastructure, digital communication over the power lines has become an excellent opportunity for the utilities to implement new services. Digital communications on the low-voltage electrical grid is relevant to a number of industrial actors, such as electricity, gas, heating and water distributors. Typical applications using PLC include Outage Management Systems (OMS), Automatic Meter Management (AMM/AMI) systems, Smart Grids, GIS systems, remote control tasks, load management systems, tariff switching systems, etc.

THE CHARACTERISATION OF THE PLC CHANNEL
The power lines were originally designed for distribution of 220/110 power at 50-60 Hz and not for communication purposes. To make matters worse, the power line is one of the most electronically contaminated environments in the world and the signal attenuation at the frequencies of interest is fairly high, which makes it more challenging to achieve dependable results. As a consequence, its properties as a communication channel are still not fully understood. Using this medium for narrowband communications at higher frequency bands presents many technical problems.

The low-voltage power line network is made of a variety of wiring types, connected in almost random ways (which has a strong effect on impedance mismatch). In Macau this phenomenon has a significant impact. In addition to that, very different types of devices are part of the LV network (electricity meters, fuses, etc.) and a large variety and quantity of appliances, equipment and devices can be connected in any point (air conditioners, washing machines, TV sets, etc.) and have a significant impact on the quality of the PLC channel. In fact, in this aspect, Macau has the worst case scenario.

An important property of the electrical signal is its bandwidth (the width of the frequency interval around the carrier frequency that is occupied by the electrical signal), and there exists a close (proportional) relationship between bandwidth and bit rate of the communication. Another aspect of fundamental importance that affects the bit rate is the quality of the power line communication channel. Hence, not only the available bandwidth determines the bit rate that can be used, but the quality of the channel also does. However, the available bandwidth is in general the single most important parameter for making high bit rate applications possible.

There are several factors that affect the quality of the power line communication channel and define its characterisation. They are attenuation, noise, and impedance. These vary not only with the location, but also over time, allowing the establishment of a time relation with the day period. Thus, the PLC system must be capable of adapting to inconstant power line characteristics and of achieving the higher transmission rate possible in such conditions.

For frequencies up to 145 kHz, where the noise assumes higher values, the noise is essentially due to:

THE PROTOCOLS (PLC COMMUNICATION IN THE ‘LAST MILE’)
As previously stated, the main advantage of power line communications is the fact that the physical network is already installed, making it a very attractive option. Given the physical drawbacks of the network, it becomes necessary to install repeaters of some sort if the distances are appreciable and bridges over distribution transformers if there is a need to go over that boundary.

Another aspect that needs to be considered is the difference in standardisation according to the part of the world where the technology is to be set. The most important parameters specified by the different standards are the maximum transmitted power and the allowable bandwidth. The restriction is imposed to limit the interference with other telecommunication services and maybe as a measure to avoid further spectrum contamination.

The stricter limitation put into effect by Europe’s CENELEC EN50065-1 and the narrower bandwidth allowed for power line communications may preclude the use of one of the standards in some regions, as will be described later.

The FFC Standard (American standard similar to CENELEC) allows a wider band, but according to some authors can disturb LW radio transmission.

THE RF EMISSIONS IN POWER LINES
Electrical transmission lines were designed to conduct 50 or 60-Hz power from point to point. At those frequencies, power lines are excellent transmission lines and little of that 50 or 60-Hz power is radiated. Besides the PLC based AMM applications, the electric-utility industry also uses these lines at frequencies below 500 kHz to transmit Power Line Carrier signals to control utility equipment. These lines, however, were not designed to carry radio frequency (RF) energy. As the frequency of carrier-current signals conducted on power lines is raised, the amount of signal radiated from the line increases rapidly. For a given signal level, the radiated emissions from power lines will increase by tens of dB as the frequency is increased from LF through HF. Just for curiosity, at HF, power line wiring makes a fair to excellent antenna, similar in gain and pattern to the antennas used by licensed radio services.

Regarding the RF emissions it is commonly accepted that:

We found that LLT sites have on average a lower noise level than MLT sites due to the smaller transformers installed. The results are shown (Figure 2 and 3):

The measurements were taken on April and October of 2008. We believe that in July and August these measurements are slightly higher.

For both protocol types, CENELEC and FCC, we had to use repeaters (not many) for the most difficult cases/situations. The repeaters we used are simply PLC modems that behave as repeaters. Our PLC modems are installed at the meter room level in each floor.

The average success transfer rate on a daily basis achieved by both protocols is approximately: 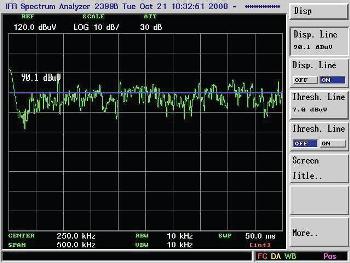 WHY IS NOISE LEVEL SO HIGH IN MACAU?
Several worldwide PLC experts that conducted trial tests in Macau for the past five years have stated that the Macau LV powerlines network situation is much more difficult for communications than in Europe and Japan. The average noise level found in Japan and Europe is around 50-60 dBuV for high season and daily peak hours, which is viable for digital communications. In Japan, for instance, only in-house (indoor) PLC is allowed. Japanese regulation requires suppressing the noise from the PLC installation as low as the ambient noise, at the distance of 10m from the house, to protect the shortwave radio users in neighbouring houses. However, even with tight regulations, the reality is that the PLC noise exceeds the ambient noise level and often exceeds more than 10dB and causes serious interference with the radio reception.

In Macau for the trial sites we have selected, with around 300 customers in each transformer (which is not the worst case; we have many transformers with more than 1000 customers), the average noise level is around 80 to 100 dBuV during the summer season and at the peak hour (worst-case scenario).

This situation can be explained by the following factors: 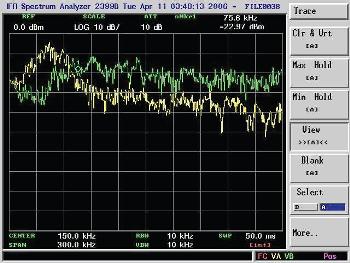 Due to the above factors, Macau is facing some difficulties in terms of a straight solution for an AMM project based on PLC communications. We believe that FCC protocol may have a more robust and reliable behaviour than CENELEC protocol for the Macau LV electrical networks environment, but it is still a bit early to state that. During 2009 further tests will confirm this assumption. We also believe that some neighbouring regions like Hong Kong and even Singapore face similar problems.

Conclusions
Based on our five years’ experience in the Power Line Communications (PLC) technology field, we think a PLC-based AMM system is technically viable in Macau. Even though some research companies believe PLC is destined to become a technology curiosity for companies with spare cash, PLC technology has been viable for some years, as demonstrated by several commercial products available today. Advances in signal processing and semiconductor development have made this concept a reality. These technologies obtain data transfer speeds of up to 10 KBPS (with some others being announced with speeds above 100 KBPS) which is good enough having in mind all functionalities required for this type of AMM system.

The assessment of available data through the CEM trials is not completed. It is expected to be finished by mid 2009. We believe that a PLC solution for AMM is not a constraint anymore in Macau. Moreover, as we have said before, if we can prove that some drivers can be confirmed (Non-technical losses, Prepayment and some value-added services), then we can surely justify the Macau AMM in terms of costs and secure a shorter payback period for the project.

An additional comment regarding non-technical losses as an eventual driver for Macau AMM is warranted: We can say that in the last decade, the total CEM system losses were 4.5 to 5 percent of the total energy generated. Of this, it is estimated that 4 percent was due to technical losses and 1 percent due to non-technical losses. Should the AMM trial results show non-technical losses have been reduced by 50 percent, or to 0.5 percent of the total energy supplied to the 1,000 trial participants, and if this reduction is consistent over the total CEM customer base of 220,000 consumers, then a cost saving of over US$ one million per year will be realised. This, together with the expected savings to be produced by other benefits/drivers, will provide a strong case to justify the expansion of the trial AMM system at CEM.