By Wu Yue and Lv Yong

ZigBee wireless communication technology provides a good solution to the above issues. By applying ZigBee technology to AMR, and using smart terminals in the system, data can be collected, transmitted, and managed easily. In addition to enabling the utilities to monitor and analyse energy consumption status, the system also provides value-added functions such as remote control, diagnostics and upgrading, which has significant importance in areas such as enhancing utilities’ working efficiency, realising automatic load monitoring and control of power systems, and improving the power utilisation factor.

ZIGBEE-BASED AMR
The ZigBee-based AMR system is designed based on factors including the network scope and cost (Figure 1). 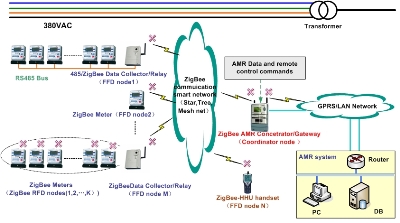 Concentrator/gateway
The concentrator is the coordinator of the network and the logic centre of the whole ZigBee AMR system. It gathers data from all the meters within the network, and then processes, stores and delivers the data outside the ZigBee network and background system.

Collector/repeater
The data collector is the FFD node in the ZigBee network. It performs the functions of router and repeater, and also connects meters via RS485 bus or in ZigBee manner. The collector collects and manages data from the meters, and is a major device of the system.

Hand held unit (HHU)
The HHU is a meter reading device enabling the user to collect data in a mobile manner within a certain area. It is also indispensable for the engineers to install and test the ZigBee AMR system.

SYSTEM OPERATION MODES
Based on the above architecture, Holley Metering Ltd designed their ZigBee AMR system using a platform provided by Ember. The system operation modes are as follows.

The nodes that receive the advertisement need to reply to the concentrator with information such as the node address, neighbouring nodes, and status of the managed meters. The concentrator then sorts and processes the responses to get information on the whole system’s scale, structure and status.

Automatic acquisition of meter information
In general, the collector connects meters via RS485 bus. It follows the communication protocol that the meters support, and receives and manages data from each meter. By using DLT/645 protocol that is widely adopted in the domestic meter industry, the collector can automatically obtain information such as number of meters connected, meter ID, and meter status.

Freezing data by each collector
Normally in an AMR system, when the collector receives the meter reading command, it needs to forward the command to the meters it manages and then receive back the data from the meters. As the meter’s communication speed is very slow (1,200 to 9,600 baudrate), and the process is carried out meter by meter, there will be a long time lapse, especially when there are large numbers of meters and meter reading items. In addition, frequent communication will cause a jam and affect the stability of the ZigBee network.

In order to improve the real time capability of meter reading, and improve network communication efficiency, in the ZigBee AMR system the collector reads data from the meters regularly and stores the data as well as the time stamp when the data is collected. This behaviour of storing data regularly is known as “data freezing.” Thus, when the collector receives the meter reading command, it does not need to forward the command to the meters. Instead, it can send the frozen data to the concentrator directly in a certain form.

Special or real time commands to specific meters
The ZigBee AMR system may include different types of meters. Although the meters support a similar communication protocol, there will be certain meters that may have special functions (e.g. TOU), and need special commands to operate. Also in some cases, the AMR system will send real time commands to some meters (e.g. remote switch-on/off) and the meters need to give a real time response and finish the work. Under these circumstances, it is obvious that being able to read frozen data only cannot meet the requirements of a ZigBee AMR system.

HHU reading frozen data
As a meter reading device, the HHU can also read frozen data, but reads data only from the nodes within range. By performing the meter reading tasks repeatedly in different areas, it can collect all frozen data from widespread nodes.

A PILOT ZIGBEE AMR SYSTEM
Holley Metering Ltd established the first domestic pilot ZigBee AMR system in Guizhou Province of China. This pilot system contains a ZigBee concentrator/gateway, ZigBee data collector/ repeater, ZigBee meters, ZigBee HHU, RS485 meters, and system management and testing software. This comprises one concentrator (coordinator), 127 collectors (each connecting to 16 meters via RS485), and 65 ZigBee meters (all FFDs). That is, the pilot ZigBee AMR system is composed of 193 ZigBee FFDs and 350 meters. The pilot system has operated for over 5 months, and turns out to be stable. The main testing parameters are shown in Table 1.

From the above results, it can be seen that the ZigBee AMR system has clear advantages in the key technical indices such as network form time, meter reading, real time remote control, and power consumption. Subsequently Holley Metering Ltd has finished remote upgrading of the ZigBee network to meet wider application needs.