Tenaga Nasional Berhad (TNB) is the major electrical utility in Malaysia and has around 7 million electrical meters to read every month. Since the cost of manual meter reading is considered relatively low for the majority of small consumers, the drive to automate meter reading has been a difficult journey in terms of cost justification. Hence, TNB has started AMR on the large consumers first, numbering around 60,000, with whom it was estimated huge potential savings could be obtained from more efficient metering data collection for analysis of metering irregularities and automation of the billing process.

Deregulation is not the prime mover for TNB to pursue AMR as is the case for other utilities. The business case or objectives for an AMR project is based mainly on the reduction of non-technical losses and efficiency of meter reading and billing.

It is envisaged that AMR will be able to do daily interrogation of the meters at the consumers’ premises and produce daily “health check” reports for each consumer’s metering. Cost benefits are estimated to derive from the immediate rectification done on consumers’ meters reported to have irregularity alarms, either due to genuine failure of the metering system or to acts of tampering.

The metering data warehouse daily singles out consumers with metering irregularity warranting immediate actions to be taken to rectify the problem. Specific metering teams are on daily standby to tackle the metering problems on site. Thus, non-technical losses are not prolonged and continuous sale of electricity is ensured, and the financial returns of the project can be realised faster.

On the other objective of automation of the billing process, all the billing data can be transferred electronically from the AMR software to TNB’s billing software, called eCIBS, within a day. Hence, with AMR all the large consumer bills can be rendered the next day, compared with the staged procedure involved with manual meter reading.

Chronology
Pilot projects using different communication technologies such as fixed telephone lines, power/distribution line carrier, proprietary radio network and GSM, were tried out since 2000. The critical factors learned from these pilots are as follows :

Due to the priority given to the large power consumers to be remotely read first, public communication GSM was decided upon to address mainly the wide coverage needs as the large consumers are widely scattered. The competitive rates offered by the modem supplier and telecom company also helped to firm up the choice at that time. 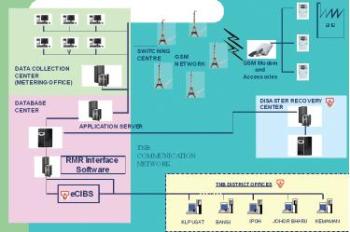 Initially in 2005, around 2,800 medium and high voltage meters were fitted with GSM modems to enable daily collection of 48 half-hourly metering data to one data collection centre. Due to the success of the project in recovering the project cost within two years, the project expanded to cover another 60,000 low voltage large consumers in 2007, still using GSM. This project is still ongoing and targeted to be completed in early 2009.

Meanwhile, the search for a more cost effective AMR solution for the small consumers is still ongoing. The main criteria are the financial returns of such a project, because technically, most AMR systems are well established and stable.

The way forward
Moving forward, it is envisaged that all large power consumer metering and billing functions will be centralised where the single process owner can gain synergy and control to ensure that all activities are in a closed loop. Also, this will allow a smooth transition towards ebilling and a paperless bill environment where consumers can access their bills online anytime with the facility to do electronic payment. Besides ebilling through email and web services, hard copy bills, if required by consumers, will be delivered by third party services such as private couriers or the post office.

The build up of the metering data warehouse opens up new opportunities for TNB to explore. There is also the possibility of introducing new customer services such as consultancy on energy management and marketing of metering data. A more systematic customer profiling can now be done to assist the planning department to optimise asset utilisation as well as provide TNB’s customer services to better handle customer queries.

Expansion of AMR to cover the smaller consumers will be evaluated based on targeted areas and population density. Again, the question that needs to be answered is whether to use private or public communication. Private usually means proprietary modems, software and limited meter compatibility, whereas public communication is more open, modems are easily available and compatible to more meters. However, at the moment, more proposals are coming from the private communication provider with the advantage of savings on monthly communication charges based on the build, own and operate model. Hence,the possibility of using hybrid communication is expected as it is seen that the fixed network solution for smaller consumers is considered costlier than a mobile semi-auto meter reading solution.

Another feature that is required on the smaller consumers’ metering is the automated disconnection and reconnection. Such consumers comprise a minor 2-3% of the population but present a major headache to the utility. With this feature available, the AMR system should be able to cater for prepayment as well. AMR with prepayment can be considered as a good solution to both the utility and the consumer, as the utility can resolve defaults in payment while providing choice and convenience to the consumers.