China is on the verge of adopting advanced water meters, the boss of a metering manufacturer told Metering.com last week.

The rollout of electricity meters is almost complete and demand decreased by around 20% this year, according to Raymond Zheng, managing director of Hangzhou Laison Technology near Shanghai in Eastern China.

The Chinese government is now looking at the tariff and billing system for gas and water metering before it begins replacing existing meter stock, said Mr Zheng.

The likely technology will use automatic meter reading based on M-bus, and some pilot projects are underway for gas and water meters using RF wireless communication.

And the shrinking cost of ultrasonic meters is making this technology a possibility for water metering in China, said Zheng. 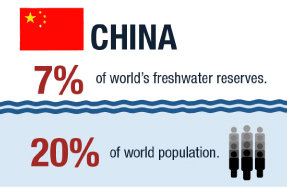 Last week we reported that the Chinese government plans to invest 1.8 trillion yuan (US$294 billion) in water-resources projects, during the 12th five-year national development plan period.

China is estimated to be one of 13 nations worldwide described as having the scarcest water resources.

An estimated 16% of water supply was lost during transmission in China’s 675 cities in 2011, amounting to total of 6.68 billion cubic meters.

The news comes as the worldwide market for two-way smart meters was named as the fastest-growing segment of the global water meter industry, according to a new report from IHS Technology.

The global market for two-way smart meters is set to surpass the US$1 billion mark for the first time in 2019, with managed services, analytics and smart water network adoption all combining to accelerate growth.

North America continues to be the leading adopter of two-way water meters used in advanced metering infrastructure (AMI) networks, but stronger growth is occurring in Europe.

France is the fastest-expanding market of all major countries worldwide, with smart meter penetration approaching the 50% mark.