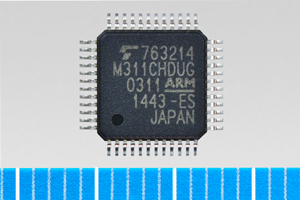 Japanese electronics giant Toshiba launched a new microcontroller this week for use in smart meter applications.

The TMPM311CHDUG is the latest addition to its ARM Cortex-M3-based TX03 series.

The allowance for measurement error of single-phase power calculation is within 0.1 %.

Key features for a three-phase power meter solution also includes up to eight channels supported by using two units of the microcontroller in an interlocking way.

Built-in low-noise variable gain amplifier in each conversion channel of the 24-bit ΔΣ-type AD converter will enable high-precision measurement for current from a current sensor. This supports both power calculation meter and various sensor equipment.

Toshiba confirmed that sample shipments will start in April, with mass production due to kick off in September 2015.