Energy meters are used in homes and industry to measure energy consumption. The large energy consumers want better data to make energy management decisions and also the utilities need more data to improve their services. The thrust is for more and more value added features along with compactness of size. 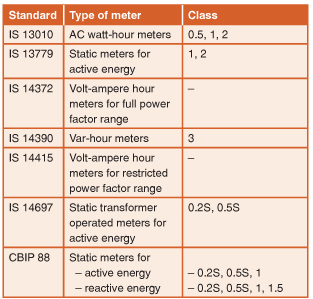 The increasing use of electronics has led to the development of electronic meters with features such as remote sensing, internet connectivity, LCD display for active as well as reactive energy, recording of tampering events with date and time, multi-tariff billing, maximum demand and many other power quality monitoring features. These advances in technology have given rise to the problem of electromagnetic interference (EMI).

The circuitry/subassemblies of equipment under use can emit electromagnetic energy, which can affect the performance and reliability not only of the nearby equipment (i.e. inter-system interference), but also the performance of the sensitive circuitry within it (i.e. intra-system interference) Accurate billing of the power consumed is very important not, only to the utilities but also to the consumers. It is necessary to ensure proper functioning of these meters, particularly in the event of any EMI occurrence. Events like the switching of inductive loads, electrostatic discharges, lightning in the atmosphere, the presence of telecom and radio broadcast signals etc., can give rise to one or another type of EMI. 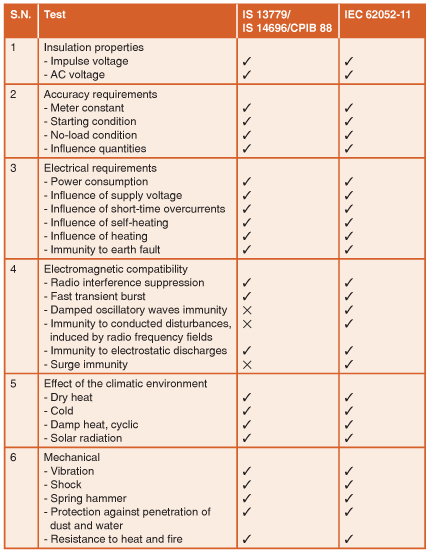 Thus, it is essential to manufacture energy meters that are electromagnetically compatible, i.e. that they are neither a source of EMI, nor should they be affected by any EMI. Depending upon the type of meter and accuracy class, a number of national and international standards are available. This article outlines the various electromagnetic compatibility (EMC) tests in terms of Indian Standards and the International Electrotechnical Commission (IEC) international standards, which are mandatory for exporting products in European countries. App licab le stan dar ds Standards set up a common protocol and structures which provide meter buyers with the ability to exploit the functionality of the meters they buy. In India, the standards for energy meters fall under the IS series, some of which are listed in Table 1. 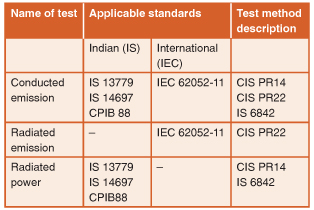 Testing of energ y meters In Table 2 tests done on energy meters according to the IS 13779/IS 14697/CPI B88 standards are listed, along with a comparison with IEC 62052-11. To ensure that the energy meter is electromagnetically compatible, EMC tests are divided into two categories for emission and immunity. Of the causes of EMI, emission results in the most incompatibilities but yields the greatest number of solutions, while immunity on the other hand is more subtle in its effects and solutions.

Immunity tests are done to ensure the proper functioning of the meter in the presence of EMI, i.e. that it does not act as a receptor: 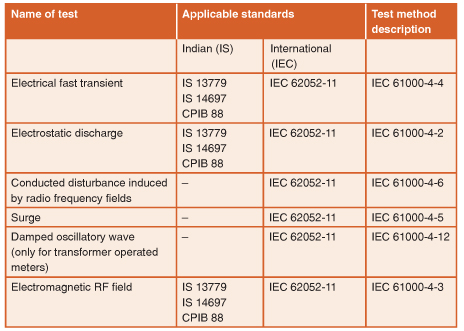 Designing a meter that does not generate EMI is as important as designing it to not be affected by EMI. There is no unique solution for EMC. The solution can be as simple as adding an inductor or a complex filter. EMC tests are vital for energy meters fitted with electronic functional devices. Manufacturers may spend more money and lose contracts when their products do not meet the EMC standards at the time of final testing.

Two approaches are available for manufacturers, either to test at the design stage, or to incorporate EMI fixes on the finished model. The first approach is logical and reduces the time to market the products. The second approach will cause delay, frustration and money. Hence, manufacturers should utilise the EMC facilities during the design phase to make their product robust and reliable in an EMI environment.