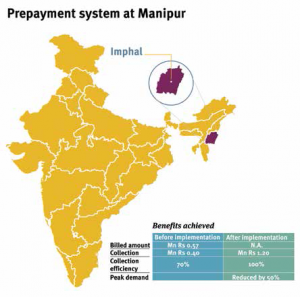 The state has no generation capacity except one mini hydro-power project (600 KW); a few diesel power houses and one 36 MW heavy fuel based plant (this cannot be operated due to the high cost of fuel).

On the other hand, the recovery from Discoms was only around 50% as their consumers don’t pay bills on time or pay for less than their consumption or don’t pay at all (due to pilferage/tamper).

Therefore, in order to resolve the issues and to improve the financial situation of the Discoms, MSPDCL decided to implement prepayment metering, which would help them improve revenue and manage load as well in central Imphal. MSPDCL therefore released its first tender for around 18 000 prepayment meters in 2011.

The key drivers for Manipur were to:

The Discom and the Manipur government were facing tremendous pressure from transmission companies and the generators because they had not paid their dues as per the PPAs.

There were huge AT&C losses (80% in 2008-2009). The reason for high AT&C losses was mainly the commercial losses due to poor billing & collection efficiency. Meters installed did not have revenue protection features and around 15-20% of points were unmetered. Another major challenge was managing peak demand.

Generally, in the evening around 6 pm to 9 pm the voltage dropped to 90 volts and consumers were not able to get proper and 24/7 power supply. Due to such power crises, either power shortage or low voltage, industries were not able to run properly and markets / shops were forced to close by 6 pm every day, making it bad for business. All these aspects forced the Manipur government and the Discom to look for a proper solution to the crisis; a solution that helped improve the…