[Sundar Rao][July, 20 2006]India is home to 1.1 billion people, roughly one-sixth of the world’s population, and has the world’s twelfth largest economy. Today India is one of the fastest growing economies with a projected GDP growth rate of 8% per annum. Recognising that inadequate infrastructure and Government ownership of many enterprises in core sectors has been one of the main constraints for rapid economic growth and industrialisation, successive Indian Federal Governments over the past one and a half decades have initiated various measures to liberalise and reform certain sectors of the economy, by facilitating private sector participation in a large way.

India’s power industry has been under public ownership and management since the country’s independence in 1947. Historically India’s State Electricity Boards (SEBs) have been in poor health, with their losses estimated to amount to the equivalent of about 1.5% of GDP.  However in the last six years, major reforms have been introduced in the power sector by successive Governments to support a projected growth rate of around 12% of the power sector that matches with the demands of the economy, growing around 8% per annum. One of the key initiatives was the passing of the 2003 Electricity Act and introduction of the Accelerated Power Development Reform Programme (APDRP) in 2001.

The Electricity Act of 2003 was introduced to remedy many of the problems plaguing India’s power sector. The Act called for the unbundling of the SEBs assets into generation, transmission, and distribution companies, and the eventual privatization of these assets.

In February 2001, the government introduced the APDRP as a means of implementing distribution reforms and restoring the commercial viability of the power utilities sector, with the ultimate goal of attracting external investment. Under the scheme, an incentive equivalent to 50% of the actual cash loss reduction by SEBs and utilities is provided as a grant.

Some of the APDRP initiatives that have been undertaken to turn SEBs into commercially viable entities include:

The government of Andhra Pradesh has implemented and is continuing to implement several policy and other initiatives to accomplish the reform process. Among these the transmission, generation and distribution businesses have been unbundled into separate companies, while a distribution privatization strategy is being finalized.

The State has been taking concrete steps towards the installation of meters. There has been an improvement of billing and revenue collection and the tariff orders passed by the Regulatory Commissions reflect a trend towards tariff rationalization. Anti-theft legislation with provisions making penal the theft of electricity is stringent.

With a rate of 30 000 new connections per month, a number of new initiatives for improving the quality supply have been introduced by the APCPDCL. These include:

APCPDCL has also launched a campaign to move electricity meters from the homes of customers to nearby poles or other public places in order to monitor line losses and limit tampering of meters.

The company is managed by a Board of Directors, comprising the following members:

G. Sai Prasad, IAS, became Chairman and Managing Director of APCPDCL on 25 May 2006. Prior to this, he was the CMD of Eastern Power Distribution Company of AP Limited at Vizag.

B. Ravindra Reddy became Director of Operations of APCPDCL on 28th September 2005. Prior to this, he was the Operations Chief General Manager of Southern Power Distribution Company.

Ghulam Ahmed joined the APSEB as Junior Engineer in 1968 and rose to the position of Chief Engineer (Comml) in AP Transco after having 33 years of eventful service, from where he retired in August 2001.

A. Srinivasa Rao, Executive Director: Metro Zone became Director, HR and Commercial of the APCPDCL with effect from 29th June 2005 and has been instrumental in improving the system network in the twin cities.

Investment in new metering assets represents approximately 6-7% of APCPDCL’s annual budget. In compliance with the Act all domestic and agricultural electricity connections are in the process of being metered. In addition all HV consumers with a load of more than 56 kW, MV consumers with a load more than 30 kW, and all 11 KV feeders have been provided with electronic meters.

APCPDCL has embarked on a rigorous campaign to replace all electromagnetic meters with electronic meters. This includes the replacement of defective meters and the introduction of metering to traditionally non-metered customers. The following table gives the details of number of new meters installed in the State.

The Andhra Pradesh Electricity Regulatory Commission has also put in place an amendment to the Indian Electricity Act of 1910 to provide for a minimum punishment of imprisonment for three months for customers who are caught stealing power on their second offence. Exclusive police stations for prompt action against offenders have been provided and the police force is made available when there is violent resistance to the repair and/or reading of meters.

There have been a few prepayment pilot projects around the country, but representatives from APCPDCL believe that although the technology has potential in the state, consumer buy-in would take a long time and that it would be a technology of the future.

Using IT as a tool to improve and reform

With a view to resolving issues such as faulty meter readings, which have led to frequent customer complaints, as well as to curb the temptation of meter-readers to under-read the meters of certain customers, a spot billing system was introduced in the twin cities of Hyderabad and Secunderabad in

2001 – the first city in the region to implement electronic billing.

Upon entering a house, the meter readers punch the numbers from the electricity meter into a hand-held device, which immediately prints out and presents a bill. The entire operation is also automatically recorded in the central database through the Internet, enabling inspectors to audit and ensure that readings are accurate.

The hand-held device has proven to have a payback return period for the distribution company of about three months. The success of this new system has led to the expansion of this service to the entire southern Indian state.

APCPDCL has established a separate Customer Care Centre to service the complaints of consumers. Termed the ‘E-Seva’, the facility offers a wide range of service to customers, including email filing of complaints, and has been found to be effective in providing results. 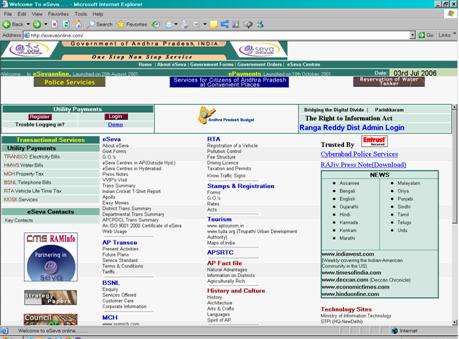 Through the introduction of these reforms stakeholders agree that signs of improvement in these and other operational levels are visible – so much so that Andhra Pradesh was rated the best performing State in the power sector in 2005-06.

However the State still faces a number of challenges. There has been some apprehension on the part of many consumers who have feared that the electronic meters are showing higher readings than the actual consumption. APCPDCL believes these claims are baseless, but has given consumers the option to verify their meter’s precision by offering testing in their presence on payment of a fee. If the meter is found to be defective, the fee is refunded and the meter is replaced at the utility’s cost.

Many meter vendors concur that both locally and nationally SEBs need to adopt uniform pre-qualification criteria and specifications for their electronic meter installations, as well as to address the cumbersome tender processing procedures and transparency in the selection of sample meters, their assessment and testing. More attention also should be given to the longevity of meters installed, particularly in terms of quality rather than the bottom-line needs.