By Arindam Ghosh and Praveen Golash

The loss levels of the distribution utilities have reached alarming proportions and are a cause for severe concern to the government of India and the state governments.

The aggregate technical and commercial (AT&C) loss is the best indicator to oversee distribution losses in any state. It essentially compares the total units of electricity sent into the system with the units of electricity for which revenue is realised. AT&C losses for the majority of utilities across the country are hovering in the range of 40 to 45 percent (Figure 1). The losses, mostly commercial in nature, are primarily attributable to issues like inaccurate meter reading, meter tampering and direct hooking. A structural approach for effective loss reduction should involve a series of administrative, technological and human resource interventions.

Strengthening energy auditing is paramount to initiating any loss reduction exercise. This will involve 100% metering at 11 kV feeder and distribution transformer (DTR) level. The preferred method is to carry out the energy audit through a third party by collecting the input energy and billed units from independent sources. The feeder and DTR metering should be done by AMR in order to make the system more efficient. A look at the statistics reveals that most of the states are far from meeting the target, despite repeated directives from the different state electricity regulatory commissions (SERCs).

One of the prerequisites for this is customer mapping or indexing. DT-related energy auditing helps in zeroing in on the loss making areas and thereby taking corrective action in a more focused manner and helping to achieve the results quickly. The ideal solution for utilities would be to get GIS (Geographic Information System) surveying done for all their consumers. This would help not only in getting consumer mapping corrected but also aid in mapping electrical networks, to assist in optimal network planning.

In addition to AMR and customer indexing an energy audit requires that proper back-end systems are in place to process the huge amount of data received through AMR, including a database to manage and archive such data. The system should be automated to capture and update all the base data from the meter reading sources, including the customer indexing, so that any type of MIS reports can be generated when required. For instance, when new users are created their details should be updated in the database. The ultimate need is to have a system of integrated energy accounting.

The Indian Ministry of Power is encouraging utilities to invest in such technological measures to carry out energy auditing through the Accelerated Power Development and Reform Programme (APDRP – a cell created within the Ministry to fund loss reduction initiatives). There is a proposal in the 11th five-year plan to provide 100 percent funding for energy audit systems, if the losses were brought down to 15 percent, and the Ministry of Power has allocated a budget of US$2,500 million equivalent for these activities. 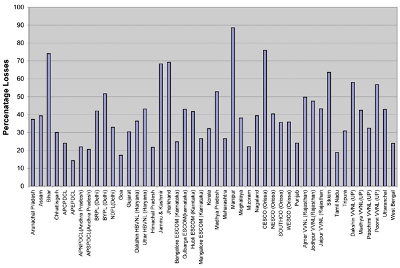 TECHNOLOGICAL INTERVENTIONS
The technological interventions that need to be introduced should be in the areas of metering, meter reading and use of the high voltage distribution system (HVDS). Metering is identified as one of key areas which, if properly targeted, can result in significant reduction in losses.

AMR is one of the most effective forms of bringing down these losses. Within AMR there are different technologies available, such as LPR (low power radio), GSM or CDMA modem. The choice of technology for a particular group of consumers is significant in the light of the cost and implementation implications. AMR through LPR is ideally suited for transformer metering and can also be used for group metering. In India there has been experimentation with pole-mounted group meters in pilot areas in which it had been identified that theft was taking place mostly in a clandestine manner by meter tampering or bribing meter readers. These meters are placed on a pole and service lines to individual premises are extended from there. Since the meters are outside the premises the chance of meter tampering is minimised. Further as these are AMR meters provided with LPR modems, data is automatically downloaded to a handheld device, and thus chances of collusion are also removed. This is proving to be one of the most effective low cost solutions for distribution utilities across India, after successful piloting in several utilities.

Theft by industrial consumers can also be checked by usage of sophisticated AMR mostly through GSM modems. In such cases consumption can be monitored on a 15 minute time-block basis and any anomaly can be dealt with through appropriate action. AMR through GSM is one of the most widely used technologies available in India today, having been well tested and proven.

Tackling theft in localities like slums and localities with perceived law and order issues would require usage of proper technology along with adequate administrative support. Thus, all such localities need to be identified and HVDS may be implemented. Further, mass raids should be made in such areas. Prerequisite to undertaking such an exercise would be to zero in on such areas and taking government into confidence. HVDS has proven quite effective in states like Andhra Pradesh and Delhi in loss reduction in areas where theft by direct hooking is rampant.

HUMAN RESOURCE INTERVENTIONS
Human resources interventions are another key area which needs immediate attention, especially for state power utilities where there is a shortage of officers. The O&M staffs of these government-run utilities are responsible for maintenance of supply as well as commercial matters like consumer complaints, bill collection, disconnection of defaulting consumers, etc. Some of the utilities have gone ahead in segregating these two functions, but a more concerted effort is required to address this critical issue of employee motivation.

Human resource interventions will also help in bringing in more accountability, the introduction of KPIs, setting of realistic targets for officers at all levels, incentive linked annual appraisal systems, etc.

The above efforts, if made in a concerted way, will go a long way in curbing losses, in addition to the efforts being made to fight the commercial loss monster through the introduction of IT solutions.