China will invest about 400 billion yuan (US$65 billion) in the coming year in a bid to overhaul its grid and the way it transmits and distributes electricity.

Zhang Zhengling said spending will need to be maintained at current levels for the next five years to help it deliver on a deal reached this month with the US to decrease the use of fossil fuels.

The investment seems small compared to the International Energy Agency’s estimate that China will need to spend more than US$4 trillion from now until 2040 to overhaul the way it transmits and distributes electricity.

Mr Zhang said: “China is a developing country and our energy consumption demand will continue to grow” at a pace faster than developed countries.

“We have large-scale, long-distance energy needs.”

The push to connect renewables and curb air pollution means spending about 180 billion yuan on eight ultra-high voltage lines by 2017, Zhang said, adding that the company has proposed to the government that another 13 such networks be built, said the report in the Gulf Times.

The technology, which the state-owned grid operator began to promote a decade ago, can “deliver larger power capacity over a long distance with higher voltage but less transmission loss,” Zhang said.

Climate deal with US 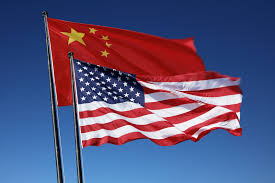 China’s annual energy consumption surged 51% from 2008 to 2013 and is expected to peak between 2035 and 2040, according to a report earlier this year from Climatescope, a research project whose partners include Bloomberg New Energy Finance and the UK Department for International Development.

Under last month’s agreement reached between US President Barack Obama and Chinese President Xi Jinping, China would be required by 2030 to install as much as 1,000 gigawatts of new zero-emissions energy, exceeding the amount of coal-fired power generation the nation has today.

Absorbing and transmitting that “will be a huge challenge for us,” China State Grid’s Zhang said.

China will “see a larger scale of clean energy development between 2020 and 2030” as the proportion of coal power in its electricity mix falls and energy demand grows, Zhang said.

China State Grid must hasten its use of the most advanced ultra-high voltage transmission technology, Zhang said.