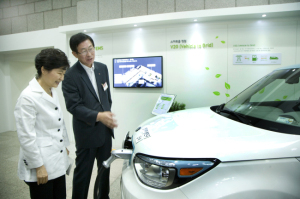 South Korea’s largest electric utility could soon be buying electricity stored in car batteries through a vehicle-to-grid pilot scheme planned for the end of this year.

Electricity will be delivered to the grid via KEPCO’s power exchange market, the Ministry of Trade, Industry and Energy said this week.

The government will revise related laws to smooth the vehicle-to-grid program by the end of this year, while the state-run electricity distributor will design a new price-charging system.

Save on electricity bills

Under the V2G program, EV owners and energy storage system operators (ESS) can charge their vehicles and storage units cost-efficiently, the ministry claims.

Since electricity fees are high during the daytime and low at night, EV owners and ESS operators will be able to see a considerable reduction in their electricity bills through the V2G system, a ministry official explained.

The pilot scheme comes as earlier this month South Korean president Park Geun-hye called on the industry and her administration to come up with more efficient plans to save energy in line with efforts to spur the smart energy sector.

An association consisting of legal, financial, energy and business experts was formed to support the development of the next-generation smart-grid infrastructure.

Vice Minister of Energy Moon Jae-do, said: “The new energy industry, in which information and communications technology is converging with the energy business, will be the country’s next growth engine and the main axis of our creative economy.”

Korea has looked into smart grids as a solution to energy shortages in an effort to maximize power efficiency.