It is said that necessity is the mother of all invention.  If that is so, then who or what is the father? Perhaps the burning ambition to be innovative in the face of a competitive market, or maybe just the desire to improve upon existing skills and abilities! Whichever, the development of a partnership between utility organisation ActewAGL and its contracted meter service provider Fieldforce Services Pty Ltd is paving the way for innovation, improved competitiveness, greater efficiencies and ultimately significant reductions in costs.

The concept of merging the meter reading functions of different utilities into one single service contract has long been considered an alternative to the traditional method of reading water, electricity and gas meters independently of each other. The development of a combined meter reading service, albeit a logical and seemingly simple cost saving and efficient strategy, raised many issues and challenges for both ActewAGL and Fieldforce Services that needed to be addressed before the overall implementation of the service could be rolled out. The outcomes, however, both present and future, far outweigh the challenges faced and speak volumes in terms of the benefits to both the organisations involved and ultimately the customers.

The service was something Fieldforce knew they could accomplish long before they approached ActewAGL in 2001 with the proposal to combine the reading of water, electricity and gas meters throughout Canberra. With approximately 370,000 meters being read simultaneously every three months, the implementation of the new contract is approaching its final stages following the formal contract signing in April 2004. All that remains to be done are final integrity checks of account data and the conversion of a few non-standard accounts to the new format, and this should be completed by March 2005.

The city of Canberra has a population of 324,0001 (the Australian population is approximately 20.2 million2) It is Australia’s national and political capital, and naturally the satisfaction of residential and commercial customers was as important as in any other city.

Although holistically coming under the one banner of ActewAGL, the reading of electricity and water meters was previously done independently of each other until 1998, when it was decided that both water and electricity meters would be read jointly. Fieldforce Services was contracted by ActewAGL towards the end of the combining of electricity and water meter reading and so was exposed to the possibilities of joint meter reading. Gas meter reading came under a separate contract up until April 2004, when the latest combined reading contract was formulated.

Before the establishment of the latest contract, gas meter reading had been the responsibility of a network operation and maintenance company, Agility Management, with the responsibility for billing gas customers coming under the framework of an associated ‘retail’ arm of the same company, AGL (The Australian Gas Light Company). Both these organisations are contracted to ActewAGL in the Australian Capital Territory to perform those services.

Fieldforce, on the other hand, was contracted to read water and electricity meters for ActewAGL and was contracted to Agility to read gas meters. As such, there were separate contracts for separate reading services, thus duplicating the legal and administrative framework. Fieldforce Services had meter readers walking around Canberra with hand-held computers reading meters in properties they had been to possibly only a week or two before. One visit was for water and electricity meters, while another visit had to be made to read the gas meters.

Fieldforce and ActewAGL saw the opportunity to combine the efforts and make only one visit to each property during each read cycle, instead of two. The fact that Fieldforce was reading all three utilities in the one city expedited the move toward the combined reading contract, although it didn’t eliminate the obstacles associated with different customer databases. Luckily for Fieldforce, this was an area of expertise. Following 24 months of ongoing negotiation, contract preparation, systems and program development and considerable in-house testing by both parties, the contract was signed and the transition to the new way of operation has been relatively seamless and well ahead of schedule. 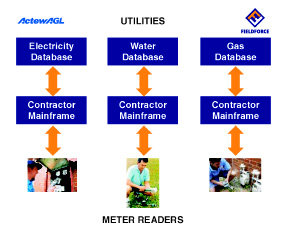 The development of the contract that would encompass the reading of all services was of considerable importance. The contract had to include key performance standards from the previous contracts, ensuring that service standards were maintained across all areas and that all legal aspects were adequately covered. Expectations varied, given that there were previously two separate contracts and two separate principals, but the new contract under ActewAGL still had to include the expectations of Agility Management, the other principal responsible for the gas meter reading contract with Fieldforce Services. Under the new contract the parties developed a new common set of service standards for the successful provision of the services.

One of the most significant challenges faced by Fieldforce was the combining of customer details from two different billing systems, sorting that information in logical reading routes to ensure maximum efficiency was gained by meter readers in the field, and then redistributing the meter data acquired back into the two different billing databases. The combining of the data was critical for optimal efficiency. Fieldforce had to merge the data first, so that it could arrange actual meters at each property in logistical order, avoiding the need for meter readers to double back to read a meter they had just walked past. Having the benefit of in-house data management personnel, Fieldforce was able to develop its own software that enabled its systems to interface with all the other systems being used by the various parties. Additionally, Fieldforce’s internal personnel are highly skilled and experienced in the use of both Itron software and the system developed in-house to enable it to communicate effectively with numerous other systems.

Customer acceptance of the new method of combining readings was also perceived to be a potential challenge, which ultimately proved less troublesome than first thought, although there were still concerns from customers. The challenge surrounding customer acceptance required ActewAGL to consider the methods by which it would notify customers, both residential and commercial, ensuring the most positive message was communicated and customer acceptance was assured. Residential customers were advised via a scripted written message on their first bill subsequent to the change, while commercial customers were advised via personalised letter, which was hand-delivered by Fieldforce when taking meter readings.

The combining of meter readings meant that customers’ billing for the various utilities would arrive at the same time, effectively combining not only the readings but also the required payment of bills. The resultant enquiries from customers regarding the new process totalled approximately 0.14% of the customer base, a much smaller number than first anticipated (figure estimated based on number of queries received as a percentage of total customers).

To assist customers’ acceptance of the transition to combined reading, and the effects of receiving bills for different services at the same time, ActewAGL call centre personnel were given a written script to which they could refer in order to answer customer questions. Payment options are made available to customers, enabling them to amortise their energy consumption expense across the entire consumption period, with adjustments made periodically to account for fluctuation in usage. 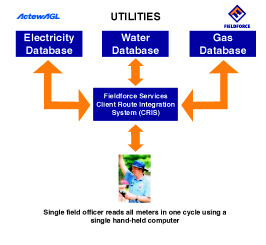 There is a legislated requirement within the Australian Capital Territory that utility bills must be received by customers within 120 days of their last bill. As the gas meter database was smaller than the previously combined water and electricity database, it was con-sidered more practical and less disruptive to have the gas meter reading cycle fall in line with the water/electricity cycle. The fact that maximum billing periods are set under legislation also proved to be a challenge in bringing the cycles together. ActewAGL and Fieldforce were able to schedule the reads so that all reads were completed on time in order for ActewAGL to meet its billing obligations.

Combining the vision of ActewAGL and Fieldforce, the management expertise and commitment of ActewAGL and the combined negotiation and determination of the two organisations to make the project a success, ensured that the transition to a combined reading schedule ran smoothly and was relatively trouble-free. ActewAGL stated that the existing relationship it had with Fieldforce Services, along with Fieldforce’s experience, had assisted in making the path to this cost-effective solution a painless and truly positive one. The lateral thinking of Fieldforce Services served to solidify the long-term relationship between the two organisations. With that long-term relationship came mutual trust, respect and commitment.

As with any major process change, the objective is to reduce costs in one or more areas. The new combined reading services contract provided immediate cost benefit and opened the door for future cost savings in the area of combined billing systems, efficiencies in call centre operations and general meter reading expenses. The immediate benefit of implementing a combined meter service is a potential cost reduction in meter reading of up to 20%. If two or more utilities can combine the meter reading labour services through an independent company like Fieldforce, then the cost of labour to read those meters can be cut considerably. Naturally the cost would not be cut by two-thirds, as there is increased work load for each visit to a property. However, the cost of reading one meter could certainly be amortised across three utilities.

Clearly, cost savings translate into eventual savings to customers, greater competitiveness in a contestable market such as electricity and gas, and longevity of contracts, which strengthen the long-term relationship between principal and contractor.