The regulation framework of Australia’s electricity industry is undergoing major change, moving control from the states to a national scheme. The National Electricity Market (NEM) has been operating in Australia as a wholesale market for the supply of electricity to retailers and end-users since December 1998, and is currently undergoing substantial reform.

The NEM refers to the wholesale market for electricity trading, the interconnected physical infrastructure necessary for the transfer of electricity across state borders, and the intricate rules that govern both. The NEM operates across the eastern seaboard of Australia, interconnecting Victoria, New South Wales, the Australian Capital Territory, South Australia and Queensland. The impracticality of transporting electricity over large distances means that Western Australia and the Northern Territory are not participants, but Tasmania will join the NEM on the completion of Basslink.

Basslink is the electricity interconnector between Tasmania and Victoria, expected to be commissioned by summer 2005/2006.1 It will export up to a maximum of 600 MW of power from Tasmania to Victoria and import a maximum of 300 MW to Tasmania, with a continuous rating of 480 MW. The 350 km electricity cable will carry the first ever electricity between Tasmania and mainland Australia, and the 295 km undersea cable component will be among the longest of its type in the world.

Restructuring of the NEM is occurring under reform initiatives driven by the Ministerial Council on Energy Senior Committee of Officials and the Council of Australian Governments Energy Markets study. 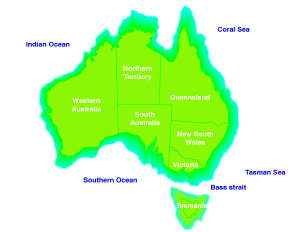 Two new national energy market institutions are being established to provide an opportunity to consolidate the regulation and rule making for Australia’s electricity and gas distribution and retail businesses. They will be known as the Australian Energy Regulator (AER) and the Australian Energy Market Commission (AEMC). These two bodies will provide one principal benefit – they will control what the different states and territories have been regulating in the past. The result should be the elimination of inconsistencies that are apparent from different jurisdictional regulators exercising similar discretions.

The National Electricity Code (NEC) embodies the process for changing the wholesale market and access rules for electricity in the NEM jurisdictions. Similarly, the National Access Code applies to gas transmission and distribution. Both need to be revised to accommodate the new governance structure.

Streamlining the rule change process is important in the case of the NEC, because there has been considerable duplication between the processes of NECA and the ACCC.

The AEMC will be responsible for rule-making and market development and other functions as per the National Electricity law, the NEC, the Gas Pipeline Access Law, the National Gas Access Code and any other agreed Commonwealth, State or Territory law that relates to energy.

The AEMC will initially be responsible for rule-making and market development in respect of the wholesale electricity market and electricity transmission networks in the NEM jurisdictions (i.e. take over the functions of NECA).

For the NEM, the primary objective of the AER will be to promote the long term interests of consumers of electricity with respect to price, quality and reliability of electricity services and economically efficient investment and innovation.

Whilst the world continues to examine the issues and conduct extensive reviews of the technology and utility practices, Australia embarks on a programme to consider interval meters. In Victoria, the Essential Services Commission (ESC) has mandated that interval meters will be rolled out, starting 2006, for regulated customer classes.

The roll-out will be phased as per Table 1.

According to the ESC in its Final Decision, the main reason for the roll-out is to improve the competitiveness and efficiency of the electricity market in Victoria, and thereby contribute net economic benefits to electricity customers.

Price signals that reflect the costs of consumers’ electricity use patterns are a prerequisite for consumers and the economy as a whole, and are necessary to realise the potential benefits of the structural policy reforms that have taken place in the electricity industry. The roll-out is expected to achieve cost-effective pricing.
Benefits from installing interval meters include:

The responses of electricity demand to cost-related prices should contribute to lowering the cost of energy by delaying investments in new infrastructure to satisfy the future growth of, and peaks in, the demand for electricity.

In fact Energy Australia, an electricity distributor and retailer connecting 1.4 million customers in New South Wales, has already embarked on an interval meter programme.3 Energy Australia had a changing network environment, including increasing load growth, increased customer expectations and regulatory interest in energy prices. The impact of summer peak loads was growing rapidly and changing shape and this added stress to the network. On hot days, the average demand of air-conditioned residential premises more than doubled. In turn, the capacity lowered on hot days.

From a regulatory perspective, Energy Australia recognised that it was important both to control demand on the electricity networks and to reduce capital expenditure. Energy Australia’s interval meter programme comprises:

From 1 July 2005, TOU pricing is likely to be standard for all new connections to the Energy Australia network.

Basically, the two benefits to Energy Australia are optimal level of capital investment in network infrastructure; and controlled growth of maximum demand within its network area. Victoria is taking the lead in Australia as Italy did in Europe.