By Ezra Beeman and Boris Kobal

Two complementary initiatives have been launched over a two-year period to test and develop the company’s original $282 million* business case. The first was the Strategic Pricing Study, which addressed uncertainties around customer price responsiveness, and the second was the AMI pilot, which addressed uncertainties around AMI costs and operational benefits.

Independently of EnergyAustralia’s AMI initiative, a national working group was formed in 2007 to establish minimum national functionality and to evaluate the business case for a national rollout commencing in 2009. Having the country’s largest, most comprehensive and most advanced pilot is allowing EnergyAustralia to contribute to this debate.

NECESSITY IS THE MOTHER OF INNOVATION
Responding to emerging consumption trends (Figure 1), EnergyAustralia commenced a five-year project in 2004 to rollout interval meters and time-of-use (TOU) pricing to all its 110,000 residential and small business customers using 15-160 MWh per annum. The company also made TOU the default tariff for all new and upgraded sites. Together, these two initiatives were increasing the number of customers on TOU by around 50,000 per annum.

TOU pricing was justified to the regulator on the basis of expected long-term savings from avoided and deferred network capital expenditure (capex), which is driven by growth in customers’ peak demand. Analysis had shown that rolling out interval meters to customers using less than 15 MWh per annum would be uneconomic based on network capex savings alone. By realising additional operating costs (opex) savings and other social benefits using two-way communications, an AMI solution could economically deliver TOU and other more efficient price signals to the remaining 1.5 million customers.

REGULATORY DRIVERS
By demonstrating the potential benefits from a full-scale AMI deployment to society as a whole, and the limitations preventing a unilateral investment, EnergyAustralia aimed to secure the required regulatory approval to proceed from as early as FY09. 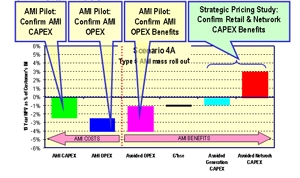 If the regulator approved the investment, EnergyAustralia would earn its Weighted Average Cost of Capital on the estimated $284 million expenditure. As an added incentive, EnergyAustralia could ‘keep’ any operational benefits realised over the five-year regulatory period under the ‘CPI-X’ regulatory mechanism, after which time the regulator would return them to customers.

Importantly, the ‘ex-ante’ approach used by the regulator to set revenues tends to penalise companies for underestimating costs. For example, a 20% estimation error or cost over-run on a $284 million investment could lead to a $56 million loss. This greatly increased EnergyAustralia’s incentive to ensure the business case would be accurate, particularly on the cost side, and that the company would be able to deliver on it.

BUSINESS CASE DEVELOPMENT
As shown in Figure 2, roughly half of estimated business case benefits come from opex savings, while the remaining half were expected to come from savings on capex. A Strategic Pricing Study was commenced in FY05 to reduce regulatory, customer, operational and financial uncertainties associated with the estimated capex savings. An AMI pilot was commenced in FY06 to identify and mitigate similar risk factors within the estimated capex requirements and opex savings. 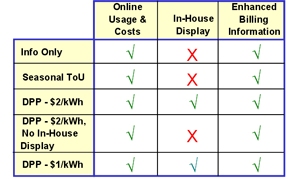 Approximately 10,000 customers were offered one of two new products, seasonal TOU or dynamic peak pricing (DPP, with both high $2/kWh and medium $1/kWh DPPs being tested), or an existing product with enhanced information (Info Only), as shown in Figure 3. The Study was planned to extend over two winter and summer seasons, until late 2008. Close attention was paid to the statistical validity of the Study and independent verification of the outcomes is being obtained.

The pilot is the largest and most comprehensive in Australia, involving as many as 10,000 customers, four communications technologies and four vendors. Technologies being trialled are as follows: 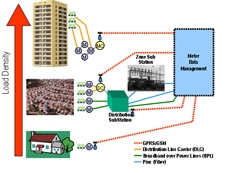 GPRS is used for typical back-haul from DLC concentrators or RS485 gateways. Each technology is subjected to an in-depth testing process prior to go-live.

The pilot is being deployed across several geographic areas within EnergyAustralia’s network territory to ensure that the experience and results are robust.

LESSONS LEARNED TO DATE AND THE WAY FORWARD
EnergyAustralia’s risk focused approach to deploying AMI has been instrumental in reducing the chances of under-estimating the costs or over-estimating the benefits. Experience gained from piloting the technology at scale with customers across the network has also given EnergyAustralia valuable insight into how best to move forward on the road towards a full scale implementation.

The results from the SPS to date have successfully demonstrated customer acceptance of new products and services, and customer price responsiveness in line with assumptions (Figure 5), and provided invaluable data on how best to market these new products to customers. The study has also helped EnergyAustralia assess the impact of in-house displays, detailed online data and enhanced billing information on customer energy efficiency, price responsiveness and satisfaction. 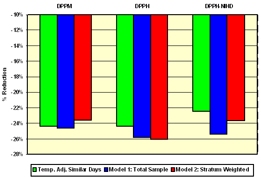 Lessons learned from the AMI pilot to date have included the planning, specification, procurement, testing, and installation of the technology. The relative operating costs and performance of the various vendor and technology options will be collected over the course of next year.

Preliminary insights yielded to date include:

Figure 6 illustrates the potential value realised to date from the AMI pilot in terms of reducing capex estimation errors (approximately $80 million of this being due to a change in AMI deployment scope to include larger customers) in the AMI business case and identifying options for $72 million in potential cost reductions to target in Phase II.
Among these are:

Results from Phase II are expected to follow a similar course, leading to revised AMI business case estimates, and identification of additional strategic options for development. By adopting an iterative development approach, EnergyAustralia expects to optimise its business case, technology solution and implementation approach in advance of a full-scale AMI deployment.