By Ann Whitfield and Adrian Kemp

Australian governments, through the Council of Australian Governments (COAG), have already committed to a rollout of smart meters where the benefits are found to outweigh the costs. NERA’s study is intended to provide the informational basis for government policy decisions regarding those jurisdictions and circumstances where a mandatory rollout of smart metering to small electricity customers should proceed.

ABOUT THE STUDY
NERA Economic Consulting, in collaboration with a consortium of consulting teams including Energy Market Consulting associates (EMCa), CRA International and KPMG, undertook a cost benefit study of a mandatory rollout of smart metering infrastructure for small energy using customers in Australia.

The study approach included the collection of cost information from meter suppliers, retailers and distributors, and the review of smart metering demand response trial evidence from both Australia and abroad. The study assessed the costs and benefits of smart metering and a non-smart meter direct load control scenario separately for urban and rural areas in each state and territory of Australia. The smart metering scenarios included a distributor-led, retailer-led and centralised communications approach to rolling out smart metering infrastructure. The scenarios were intended to allow consideration of any differences in costs or benefits according to the rollout approach used. This included consideration of economies of scale and benefits from competitive provision of data management services.

In addition to assessing each scenario, the allocation of costs and benefits was examined between each segment of the energy supply chain including retailers, distributors and the wholesale electricity market. This was to determine where benefits and costs would arise, and whether any one party would have the incentive to roll out smart meters in the absence of a mandate. Finally, the study also estimated the impact on carbon emissions.

ESTABLISHING THE MINIMUM SPECIFICATION FOR SMART METERING FUNCTIONALITY
The first phase of the study examined the incremental costs and benefits of smart metering functions to make recommendations of the functions to be included in a minimum functional specification for smart metering infrastructure in Australia. In addition to the usual functions of smart meters (i.e. interval data measurement, remote and local reading capability), recommendations, which have subsequently been adopted by the Australian Governments, were the inclusion of import/export measurement, remote connect/disconnect, supply capacity control, meter loss of supply, detection and quality of supply and other event recording. For these functions the incremental benefits were found to outweigh the associated incremental costs.

It was also recommended to include a capability in the meter to provide for an interface with a home area network (HAN), principally to support direct load control capabilities and in-home displays. For this capability, the recommendation was conditional on the potential benefits to be obtained from direct load control rather than the benefits that may be associated with an increase in the consumer demand response as a result of the provision of an in-home display. In our view, the uncertainty surrounding the likely additional energy conservation associated with the provision of an in-home display (irrespective of whether the display was paid for through other means), was still insufficient alone to justify an interface with a HAN being included in the minimum specification. In contrast, the potential for direct load control to provide network deferral benefits, particularly in areas where there are network constraints, were sufficient to justify its inclusion.

NET BENEFITS OF SMART METERING IN AUSTRALIA
In aggregate, the net benefit of a distributor-led mandatory rollout of smart metering infrastructure in Australia was found to be between $179 million and $3.9 billion in net present value terms over a 20 year period. Figure 1 breaks the net benefits into its main components, including avoided meter costs, business efficiencies and the benefits arising from consumer demand response facilitated by time-of-use tariffs and critical peak pricing.

The solid component of each of the bars in Figure 1 represents the lowest end of the range estimated for the cost of smart metering infrastructure (SMI), the avoided meter costs, business efficiencies or demand response. The potential additional cost or benefit for each of the categories (as reflected by the upper end of the estimation range in each case) is indicated by the hatched areas.

These results suggest that the costs of smart metering in Australia are almost entirely justified on the business efficiency and avoided meter costs alone, i.e. without factoring in the potential demand response benefits. There will be a need, however, to further examine the risks and uncertainties underlying the estimated business efficiency benefits, and the potential for the actual costs to exceed those estimated here, as further experience is gained with smart metering implementation in Australia through the conducting of smart metering trials.

COSTS OF SMART METERING IN AUSTRALIA
The total cost of a national smart metering rollout has been estimated as ranging from $2.7 billion to $4.3 billion in NPV terms over a 20-year period, for a distributor-led rollout. The costs rise to over $5.9 billion for a retailer-led rollout (for the upper bound). These costs were developed through an extensive cost build up exercise by EMCa, CRA and KPMG, which included estimating the costs of: 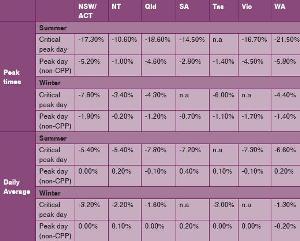 BENEFITS OF SMART METERING IN AUSTRALIA
The benefits of smart metering in Australia were estimated to be between $4.5 billion and $6.7 billion (in NPV terms). The key benefits associated with the rollout were found to be distributor and retailer business efficiencies, including the avoided cost of continuing existing metering policies. These business-related benefits were found to be potentially sufficient to justify the costs associated with the rollout alone.

THE BENEFITS OF DEMAND RESPONSE
A particular policy attraction in support of smart metering is the potential benefit associated with the introduction of time-of-use tariffs and critical peak pricing. These benefits arise from:

Shifts in electricity demand from network peak to offpeak periods can lead to benefits from the deferral of the need for additional investment in peak generation or peak network capacity and/or a reduction in unserved energy. These benefits, however, may be partially offset by higher carbon emissions, particularly in the near-term, to the extent that generation sources in off-peak periods are more carbonintensive. The overall impact of smart meters on carbon emissions will depend on the extent to which smart meters reduce demand versus shifting it, which will be higher where smart meters also enable direct load control. Overall, CRA estimated that greenhouse gas emissions will fall as a result of a smart meter rollout in Australia.

Table 1 outlines the estimates of the likely average change in a residential customer’s peak and off-peak demand resulting from them facing assumed time-of-use and critical peak prices. The results are presented for critical peak days, where a critical peak event is called and general peak (non critical peak) days and for both winter and summer. The results reflect the tariff assumptions and historical load profile within each jurisdiction.

IMPACT ON DEMAND RESPONSE FROM IN-HOME DISPLAYS
An in-home display has the potential to enhance customer demand response, both via increasing the responsiveness of customers to time-of-use tariffs and critical peak pricing, and potentially by engendering additional electricity conservation through greater customer awareness of energy use. In our view, however, there is considerable uncertainty as to the likely extent of this additional demand response. 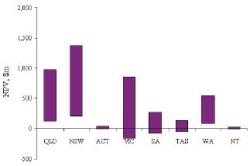 NEXT STEPS FOR SMART METERING IN AUSTRALIA
The Australian Commonwealth and State Governments have agreed in principle to a mandatory rollout of smart metering infrastructure where the benefits are found to outweigh the costs. This study provides the information to assist Ministers in deciding where a mandatory rollout of smart metering should proceed.

Our results indicate that there are only three Australian jurisdictions where the benefits outweigh the costs, namely Queensland, New South Wales and Western Australia (Figure 2). For Victoria and South Australia, whether smart metering delivers positive net benefits is critically dependent on achieving costs towards the lower bound of those estimated in this study.

For the Australian Capital Territory, Tasmania and the Northern Territory the results indicate that the justification for a smart meter rollout is highly dependent on whether the bottom range of the cost estimates can be achieved, together with the upper end of the business efficiency benefits. However, in these jurisdictions we do not consider that there are likely to be significant demand response benefits due to extreme hot and cold climatic conditions, meaning that actual demand response may be somewhat limited. This means there is not the same scope for potential benefit ‘upside’ from demand response as there may be in Victoria or South Australia.

The Australian Governments are expected to respond to this report in the coming months.

Western Australia to pilot residential DERs as a VPP