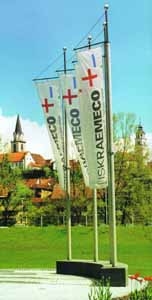 Iskraemeco, a European company that develops, manufactures and markets devices and systems for measuring and managing all kinds of energy, was founded 55 years ago in Kranj, in the country now known as Slovenia. Today the company is the third largest manufacturer in Europe and the fifth largest in the world measured by sales of electricity meters, with a market share of 15% and 5% respectively.

Exports have been a major focus of the business for over 35 years, and currently represent 99% of turnover – not surprising since the population in Slovenia only numbers 2 million (down from 22 million at the time of the dissolution of the former Yugoslavia). In that time Iskraemeco has sold its products into more than 70 countries on all five continents. Over 50% of the company’s business is conducted in Europe, but overseas sales are increasing rapidly, thanks to expansion into joint ventures and the granting of product licences. Outside Europe most sales come from South America and the Arabic countries, but growth in Asia and Oceania has been marked over the last couple of years.

The 1999 annual turnover was €84.8 million – an 8.4% increase over 1998 and an 11.9% increase compared to the 1997 results. This is regarded as extremely positive, particularly when the marked fall in product prices in Germany and other European markets (decreases of up to 30% were experienced) is taken into account. Employees numbered 2 119 at the end of 1999, and the company anticipates 2 228 employees at the Kranj premises by the end of the year 2000.

In December last year Iskraemeco’s board of directors was increased from two to four members. They are Nikolaj Bevk, president of the board, who was formerly managing director; Slavko Vidic, deputy president (formerly sales and marketing director); Aleksander Iglicar, M.Sc., formerly finance, accounting and controlling director, and Marjan Gasperlin, worker director. Gasperlin, who is elected by the worker council, is a non-executive board member and an advisor in the personnel and HR field. 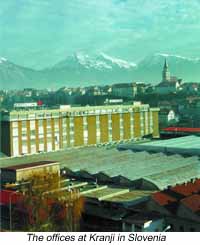 The increase in the number of directors was made necessary because of the rapid growth in operations. The policy of expanding the company’s activities by establishing offices and branches internationally continued, and co-ordination became too complex to be handled by only one person (the former managing director). Today Bevk, Vidic and Iglicar act as a collective board. Each manages and co-ordinates the activities of different business units and functions, according to their preferences and personal experience. Iskraemeco has two business units and 12 business functions, each headed by a senior manager.

The structure of the company is simple. The head office and main operations are in Kranj, and there are 12 companies (mostly abroad) which are all different in terms of scope of operation and ownership share. Iskraemeco’s trade network also includes 21 contractual local partners.

Iskraemeco’s range of activities encompasses the development, manufacture and marketing of systems for measuring, billing and managing the consumption of electricity, water and gas in both households and industry. The company opened its doors in 1945, and began producing single phase electromechanical meters in 1946. 1975 saw Iskraemeco begin manufacturing electronic precision meters, and in 1992 electronic meters for households were added to the product range. Iskraemeco holds numerous patents which are incorporated into many of the company’s designs. In addition to the export of finished products, Iskraemeco has successfully established itself in the field of transfer of technology and sales of licences for the production of meters in foreign markets. 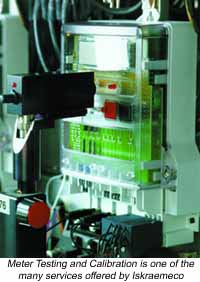 All the company’s products meet national and international standards and are compatible with competitors’ devices. This means that Iskraemeco is able to offer customers a complete metering solution made up of its own products, and is also able to provide compatible elements for systems that are already in existence but that have been designed elsewhere. The company’s products can also be customised, depending on the needs of individual utilities. Selected devices have been approved and certificated by the standardisation organisations in all the countries in which Iskraemeco operates.

Iskraemeco has worked to ISO9001 standards since 1992, and its measuring laboratories are accredited under the EN45001 standard. Internal audits take place twice a year to comply with ISO requirements. In addition the company obtained the ISO 14001 certificate in 1999, after it put in place a series of measures to ensure that manufacturing efforts complied with international environmental standards.

Recognising that deregulation and privatisation are key aspects influencing the manufacture of meters and associated products, Iskraemeco has adapted to changing market requirements. Market research conducted by the company over the last decade has led to the development of several new electronic products capable of satisfying customers’ present and future needs. Most of the R&D efforts are based on Iskraemeco’s smart hall sensor electronic electricity meter, which can be upgraded via the addition of various special features. AMR and other system solutions are also the subject of continuous development and refinement.

A company well known for its innovation, Iskraemeco produced the first meter for heat energy. It is presently developing a new generation of electronic meters, recognising that an electricity meter is becoming a complex device which must perform a series of additional functions as well as basic measurement, and should be capable of being linked into a system for the purchase of electric energy in open market conditions. Iskraemeco’s attention is thus increasingly devoted to the development of communications, the introduction of additional functions and software as a support in linking meters into systems. A new plant was built in 1998 specifically for the manufacture of electronic products, and the share of electronic products in the company’s total turnover is constantly increasing.

However, Iskraemeco’s Ferraris meter is still the biggest contributor in terms of number of units sold, and demand for the product continues to be high. R&D personnel are, however, focusing on electronics, software and communication solutions; many new engineers have been employed over the last ten years to work on these areas in particular.

Iskraemeco’s electricity meters have been approved in the UK by OFFER (now OFGEM) the independent gas and electricity regulator in that country. The company’s MT300 electronic polyphase meter won an Industrie Forum award for excellent design in 1998.

Over the years Iskraemeco has made continued investments in knowledge, development and new technologies and it is this, coupled with its focus on customer service and excellent quality products, that will allow the company to reach its aim of becoming a ‘house of system solutions’.