Smart metering has rightfully been described as an “enabler” for a number of energy and environmental policy goals, including increased energy efficiency.

Of the European Union’s 20-20-20 goals (20% share of renewable energies, 20% reduction in CO2 emissions, and a 20% increase in energy efficiency by 2020) energy efficiency is the only target not anchored in legislation. However in the coming weeks and months there will be increased attention given to this most crucial aspect of energy policy. In recognition of the imperative to use resources and infrastructure more efficiently, the European Commission is expected to publish a new Energy Efficiency Action Plan this spring, with a re-cast of the Directive on energy end-use efficiency and services to follow sometime later.

In order to examine how best smart metering could maximise its contribution to increased energy efficiency, Landis+Gyr analysed a number of studies, pilot projects and mass rollouts in the area of provision of information to the energy end-user. The company’s goal was to see what information, possibly combined with other measures, was needed to substantially increase energy efficiency in a sustainable manner. While the benefits of smart metering are largely understood, the report strives to dig deeper into the role technology can play in supporting customer engagement. Because in the end, no attempts or policy measures aimed at increasing energy efficiency will be effective without the active participation of end-users.

With the exception of one project the company directly took part in, it did not conduct original research. Rather, the study focused on the work done so far on the response of energy endusers to increased information and any subsequent changes in energy use. The areas of activity examined can be broadly grouped as follows:

INDIRECT FEEDBACK – BETTER INFORMATION ON ENERGY BILLS
Although smart metering technology allows information to be given in a more timely manner, i.e. closer to real time via a web presentation of an end-user’s billing information and energy usage profile, this measure was the least effective of those examined. That all of the studies were over ten years’ old reflect the fact that both the literature and knowledge in this area have progressed considerably (Table 1). 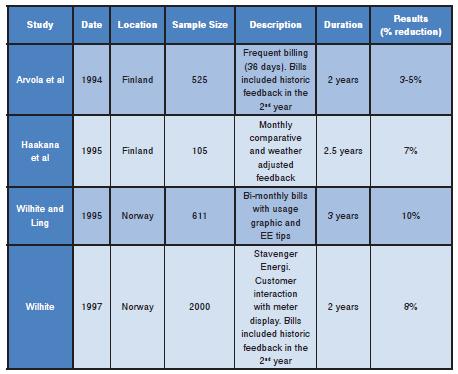 DIRECT FEEDBACK
In addition to direct feedback provided by smart metering technology, the report also examines pilots which used stand alone visual display devices (VDUs) unconnected to an advanced metering management (AMM) system. Not only are concerns as to accuracy of VDUs relevant, but they do not provide any of the systemic benefits of an AMM system, and in the larger examination of energy efficiency gains, the contribution of VDUs were modest (Table 2).

DIRECT FEEDBACK COMBINED WITH PRICING SIGNALS
Direct feedback is generally acknowledged to bring energy savings of between 5 to 15%, and sometimes up to 20%. The most successful interventions using direct feedback have also included some aspect of tariff innovation or peak shifting incentive (Table 3). These measures require an infrastructure beyond a simple VDU.

In this and in the following section on direct load control, the point of interest is not just reduced overall consumption but also peak reduction. Depending on the generation mix and electricity distribution topology used, peak reduction can be as valuable as or more valuable than reduced absolute consumption.

The “innovative” tariff or pricing signal may be communicated to the end-user by a number of means. The HEET trial (Table 3) communicated critical peak pricing (CPP) events in a display device that also presented direct real-time feedback on consumption. This combination of direct feedback and incentive tariff structures appears to be a very powerful tool in increasing energy efficiency. 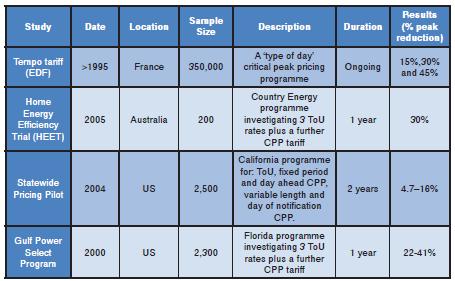 Moreover, customers seem to prefer some sort of direct feedback display device and place it where it can be seen and used. In order to be most effective, in-home displays (IHD) must be attractive physically to consumers (something they would want to have in their living room or kitchen), inexpensive and actively engage the consumer in some way, such as changing coloured lights depending on the level of energy use.

As effective as direct feedback with innovative tariffs are, direct feedback with some sort of load control brings even greater results (Table 4). *A wide spread of results from 8% increase in usage during off peak periods to 54% reduction during CPP events **Data is quoted from specific “eventful” summer period. 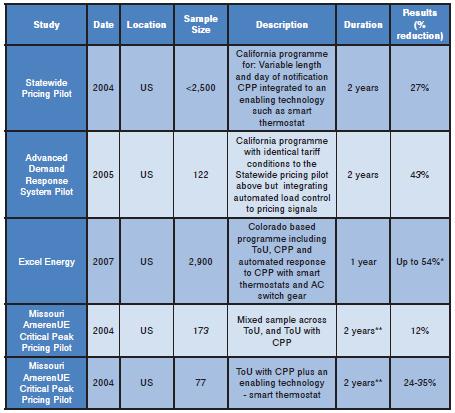 A direct comparison of the various studies listed above and the percentage of reduction can be seen in the combined graph in Figure 1.

THE ECO-PIONEER PILOT PROGRAMME
In March 2007, Landis+Gyr contributed to the Eco-Pioneer pilot project – a 12-month smart metering programme conducted by South East Water in Victoria, Australia. The programme was aimed at reducing energy consumption and greenhouse gas emissions in households by providing real time consumption data. The project used the ecoMeter, an in-home display that provides information on electricity, gas and water consumption as well as on CO2 emissions.

By comparing 2006 energy consumption with data from 2007, when the ecoMeter was installed, it was identified that participants used on average 18% less gas and 15% less electricity per household.

These savings also translated into significant reductions in greenhouse gas (GHG) emissions: 518 kg of GHG savings came through reductions in gas consumption and 1,195 kg less GHG through reduced electricity consumption. This equates to an average reduction of 1,713 kg per household per year. These reductions also translated into significant monetary savings: on average each participant saved AUS$235 (US$210 at current rates) off their yearly gas, water and electricity bill. Moreover, 100% of participants continued the programme, and a majority felt they could reduce their usage more easily and make a positive environmental change because they were provided with daily knowledge of their resource consumption. An overwhelming majority preferred the in-home display over detailed consumption data provided on a website.

CONCLUSIONS AND RECOMMENDATIONS
Providing end-users with direct feedback on their energy consumption and costs is essential to deriving the maximum energy saving benefits of a smart metering system. A simple VDU attached to a conventional meter fails to deliver the systemic benefits of smart metering, i.e. to grid operators and generators, and early indications are that energy savings from these non- AMM instruments are negligible and the technology is not sustainable.

An in-home display attached to a smart metering system is indispensible for achieving substantial and sustainable energy efficiency gains.

There is a clear increase in effectiveness when this feedback is part of a tariff structure designed to shift peak demand. Therefore, demand side management will be an intrinsic and vital component of creating an energy distribution and usage infrastructure fit for future physical and legislative demands that will be placed upon it.

The enhanced end-user information requirements in recent European Union legislation, i.e. the Electricity Directive in the 3rd Energy Package, only mandate that end-users be “informed of actual electricity consumption and costs frequently enough to enable them to regulate their own electricity consumption.” Nowhere, however, is this frequency of information defined. Certainly a yearly or semi-annual bill is not enough, and nor will quarterly or monthly bills suffice if the maximum energy efficiency gains are to be achieved.

Overall, a review of the studies provides conclusive evidence that clear feedback is a required element for end-users to learn how to control their energy use most effectively over a long period of time. Immediate, direct feedback in combination with other measures, such as frequent accurate billing and variable tariff structures, provides even greater results and is the basis for a sustainable reduction in energy demand.

None of Europe’s energy and environmental policy goals are achievable without effective demand side participation. Moreover, if set up properly, the gains from robust demand response could be tremendous – some estimates go as high as 50% of the EU’s energy efficiency target. As the prize is so great, it is imperative to consider these requirements at the onset of any AMM deployment.