Obtaining accurate information on the current consumption of electricity, gas, water or municipal heat is an important element of business conducted by any utility company. The majority of almost 7 million gas meters and over 15 million electricity meters installed in Poland have been so far read by collectors every two to three months or even only twice a year. However, consumers are not satisfied with such a reading method as the amounts charged in their bills are basically estimates based on the actual consumption recorded within previous periods, corrected only after new data are read. Therefore, some of the bills turn out to be unexpectedly high. In addition, some customers cannot correctly relate their consumption patterns to the amounts charged in their bills.

Polish energy consumer behaviour patterns must change if Poland is to comply with the requirements of the 3rd EU energy package. A smart metering system is the solution. In the north of Poland the deployment of the first multi-media system to remotely read gas/electricity meters has entered its final phase. Already the current version of the system makes it possible to abandon estimation-based bills and to replace them with actual consumption-based bills.

INTRODUCTION
The market of the distribution utilities in Poland is made up of four independent sectors, electricity, gas, fresh water, and municipal heat. Power distribution companies (together with power retail companies) supply consumers exclusively with electricity, while gas distribution companies (together with gas retail companies) supply consumers with gas. Heat and water is distributed and supplied similarly by about 800 and over 450 companies respectively. These companies separately install their meters at their customers’ premises and regularly read them. How can one ensure an effective way to read and bill the consumers of gas, water and electricity when each meter is owned by a different company and read by their respective workers? Is such a method of reading and billing consumers economic and is it comfortable for them, as they must accommodate the regular visits of an employee from each of the utilities? Of course not. Each of the three or four suppliers of utilities could make use of one remote system, common for all the meters in a building.

ENERGA SA, one of the largest electric power distributors in Poland, in cooperation with Pomorska Spózka Gazownictwa Sp. Z. o.o. (PSG), one of the largest gas utility companies, have jointly committed to deploy one of the first multi-media metering systems in the country. The accomplishment of this medium scale pilot project was assigned to Apator Group, a supplier of advanced metering systems for remote reading as well as a manufacturer of related infrastructure, software, and AMI class multi-utility meters.

PROJECT ASSUMPTIONS
The basic assumptions of a common system to remotely read and manage gas/electricity meters have been agreed on by PSG and ENERGA SA, thanks to good cooperation between the companies. The essential benefits to be gained by both partners include:

The speed and frequency of meter reading enables the distributors (and retailers) to make better consumption forecasts for the next periods of time. So far the collecting of such data has been a difficult, labour intensive and expensive procedure. The solution to the problem of gaining meter readings is Apator’s comprehensive stationary system, which allows meters to be remotely read from an office desk, eliminating the problems with lack of access to some meters, and reducing the costs of obtaining data. Additionally, the system promptly detects meter faults, attempts to tamper with the meters, and raises the alarm on all events related to the distribution of electrical power/gas, e.g. a power cut.

The pilot system has been deployed in newly built detached homes in Rotmanka, a town within the Gdazsk agglomeration. The system is based on fixed network radio concentrators used to remotely read both electricity and gas meters.

ELECTRICITY METER READING NETWORK IN ROTMANKA
ENERGA SA started the deployment of the system in 2009. Initially, the system covered exclusively electricity meters. Currently, the system covers 162 Apator LEW101R or LEW 301R electricity meters each equipped with a radio module. The network in Rotmanka is part of a larger remote reading system deployed by ENERGA SA in neighbouring areas (586 meters in Jurata, 172 meters in Chalupy, and 263 meters in Kuznica). Each meter deployed within the framework of this project is equipped with a radio module operating at 433 MHz frequency to transmit read-out data to a radio hub. Apator systems are built in the mesh topology that enables communication between individual meters and automatic reconfiguration of communication paths. A radio hub is installed in a nearby transformer station, which is used to supply the customer. Radio signals can be repeated by both meters themselves, as well as by dedicated R2M repeaters installed in some cable joints. The mesh topology enables communication with a meter by using R2M repeaters and meters, which, in turn guarantees higher reliability of each meter-hub link. The concentrator (hub) is the central unit in the network, playing the role of an access point for every meter, and transmitting the data received via GPRS to the utility company telemetry server.

GAS METER READ-OUT AND METER MANAGEMENT SYSTEM IN ROTMANKA
In order for both parties to reach an understanding as to the tasks and responsibilities regarding the operation and servicing of the system, PSG and ENERGA SA reached an agreement under which the latter will play the role of the meter readings data operator. The company already has a telemetry server (AMRklient) at its premises. The server task is to gather the data transmitted by radio concentrators, to analyse the data, and to manage the meters (SIPO software was supplied by Apator Rector). Once a similar SIPO software application is installed at the premises of PSG, the gas distributor will be able to access data collected by intelligent gas meters that are currently installed. Within the area covered by the remote reading and management system 60 Apator Metrix G6 and G4 gas meters equipped with wireless M-Bus transmission modules have already been installed. Gas meters are read using RF dongle devices coupled via the M-Bus to R2M radio repeaters. Each RF dongle device may read up to four gas meters. Readings take place every 60 seconds. Data are transmitted via R2M repeater to the local data concentrator.

Such a configuration of the system makes it “future-proof” and open for future expansions – the system is easily scalable – and it employs commonly recognised and applied communication standards (M-Bus, W-M-Bus).

The SIPO data analysis software may be further extended with advanced modules for spatial analysis on GIS layers, network management modules, network infrastructure stock taking modules and field work management module (SID package delivered by Apator Rector). Such applications may be installed both at the gas distributor server, as well as at the electricity distributor server. 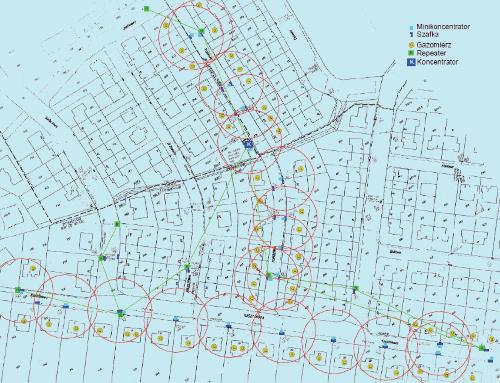 SUMMARY
The development of an advanced multimedia meter reading/ management system has been possible owing to good cooperation between the electric power distributor and gas distributor operating in northern Poland. Currently, the system covers only gas and electricity meters, but at a relatively small cost it may be further expanded to include fresh water meters and/or municipal heat meters.

The system already deployed by the Apator Group in Rotmanka, Jurata, and Chalupy is becoming a reference project for the whole of Poland and a testing ground, not only for technology, but more importantly for the concept of cooperation between the distributors of electricity, gas, fresh water, and municipal heat. The aim is to implement the smart metering – and later smart grids – approach to gain maximum effect at optimum financial outlays. Successful cooperation will bring about higher satisfaction not only for consumers, who will be paying for what they actually have consumed and will be given a better opportunity to learn how to optimise energy or gas consumption, but also it will be beneficial for the distributors that must invest in the network and metering infrastructure and would like those outlays to bring the expected returns on investments. It is worth pointing out that the distributors do not necessarily have to wait until the introduction of intelligent metering systems will be enforced by law and until those responsible for reading operations and the beneficiaries of the smart metering system have been legally appointed; they may take the initiative in their hands as ENERGA and PSG did, and that way strengthen their competitive edge.