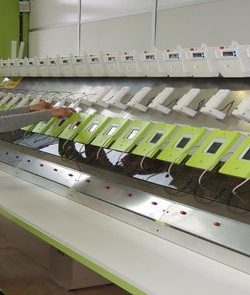 Electrical products giant CG announced today that is opening a new smart meter factory in France together with a centre of excellence for G3-PLC technology in a bid to better participate in European deployments.

The new facility in Grenoble will manufacture, test and calibrate more than 2 million ZIV smart meters a year.

CG, part of the Indian conglomerate Avantha, said the production plant will include a research centre for G3-PLC technology, be fully equipped to manufacture ZIV single and three phase Linky G1 and G3 meters, and will be ready to produce the first units by the second quarter of 2015.

CG won a contract with ERDF, the state distributor responsible for the smart meter rollout, to supply three million Linky units for the first phase of its 35 million deployment by 2021.

Commenting on the new facility, Laurent Demortier, CEO and managing director of CG, said: “This significant stride is in keeping with CG’s ambitious plans of further developing the Linky program.

“The challenges ahead notwithstanding, we remain focused on making the smart grid a tangible reality by providing solutions born from innovation.

He added: “In keeping with this aim, Grenoble serves as the best choice in providing high-level technology and flexible solutions as a first-class supplier of G3-PLC based products.”

By opening a manufacturing plant in Grenoble, near the Swiss and Italian border, alongside its Spanish facilities, CG said it will be more agile and better able to participate in large-scale smart meter deployments in France, UK, Spain and the Netherlands.

In June 2014, CG secured a €30 million deal to supply Spanish electric utility Iberdrola with more than 1 million single smart meters in a year.

The order comprises PRIME single-phase and three-phase meters and will be supplied by CG’s Spanish meter manufacturer ZIV.

The company, which is part of the US$4 billion Indian-owned Avantha Group, also announced completion this year of a roll out in Paraguay as part of a push into Latin America.

The company has a smart grid excellence centre in Bilbao, Spain, which has developed solutions for medium and low voltage automation systems using different technologies such as ZigBee and PRIME.