The measures, which were released yesterday in a consultation by the U.K. Department for Environment, Food and Rural Affairs (Defra), are intended to add metering to the existing range of options for companies – alongside more efficient water usage and the development of new resources – in protecting long term security of supply.

Launching the consultation, environment minister Ian Pearson said: “Water is a natural resource that we must all value. I believe there is an important debate to be had about the role metering can play over and above the efficiencies water companies are already expected to deliver, like meeting their leakage targets and the development of sustainable new resources.”

According to the consultation, the current best available evidence shows that metering can save around 10% of domestic household water consumption.

However the consultation recognises that metering is not a quick solution to a water resources problem. Noting that currently 28% of households are metered in England and Wales, and that water metering is growing across these countries at a rate of around 2% per year, it says that under the current regulatory regime the penetration will be 45% by 2015. Moreover, there are differences between companies in the rate of metering as it is up to individual companies how they use their powers to compulsorily meter, and to date the vast majority of meters have been installed for those opting for a meter or in new homes.

Thus if metering is to assist with additional water saving its growth must be accelerated in areas where it is the best deal for customers, i.e. where water resources are stressed and demand needs to be reduced. For example a programme of compulsory metering in the greater southeast of England (Essex, Thames Valley and London, Kent, Sussex) – all of which is water stressed – would involve metering around 5 million more properties from 2010.

At the same time a consultation has been launched by the Environment Agency to identify areas of water stress, in which the household demand for water is a high proportion of the effective rainfall.

The consultations close on 24 April 2007. Any inclusion of metering in long term management plans would come into effect after the price review 2009. 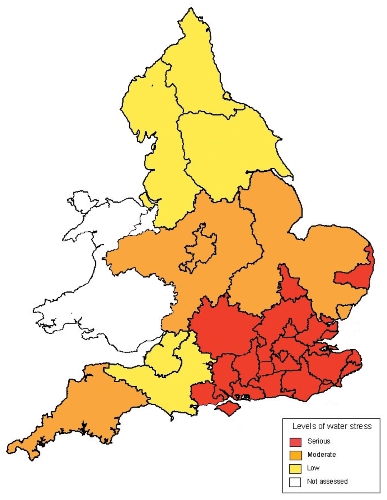