In this scenario, only the large enterprises with technical personnel are able to analyse the best utility offers, while the small/home office (SOHO) and residential customers are not able to do so.

Moreover the SOHO and residential customers that decided to go for offers in the early stages of the liberalised market (2003-2004) when the offers were fairly aggressive then faced switching problems and all the inconveniences of a new market. Then a year or so later those customers were strongly advised to return to the regulated market.

During the same period the number of liberalised gas market customers increased by 14 percent (Figure 2). Before the onset of this situation, Union Fenosa Comercial decided to define a strategy in order to help and gain the trust of the large customers, based not on the price of the product but on the level of service and customer care with “guide” and “help” components.

Since then, in the customer care area new operational customer protocols have been developed in order to offer a helping hand and to take care of the customers who decided to remain with the company and who felt defenceless in the face of large companies such as utilities.

First an analysis was conducted to establish the main reasons customers were unhappy with the company and with the market in general. The main points that emerged were lack of information and sometimes feeling cheated, billing errors and delays, poor service in the added value products, and poor communications channels. 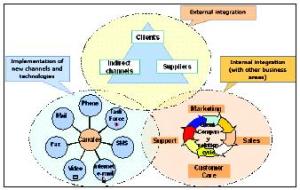 Then the implementation phase with operational solutions followed and a plan was designed in which Customer Relationship Management was based on the integration of three main areas – internal operations, external customers and the implementation of technologies (Figure 3).

The first step of the plan was to create a new Customer Service Centre. Prior to this project a call centre was in operation, focused on answering calls from customers of the distribution company. The new Centre, as a critical sales and service channel, implied a generational leap in Union Fenosa’s client services.

One of the most successful decisions was the creation of a loyalty club with a credit card and the possibility to get Union Fenosa Euros, which may be used to reduce the gas and/or electricity bill (Figure 4). Today the club has more than half a million members and has been shown to strengthen the link with customers, and therefore enhance the Union Fenosa brand value in the market. For example, the losses to switching are much reduced in both gas and electricity in the case of club members, with a retention rate of 91.9 percent, compared with 84.5 percent for non members.

Furthermore in a study of customer satisfaction carried out with CFI Group in December 2006, in analysing future behaviour the propensity to remain as customers was raised by 10 points in the case of Union Fenosa club members. In addition the propensity to recommend the company’s services also increased.

Among the actions that have been implemented are a set of automated events, which inform customers via their chosen channels of communication, on the status of their contract and switching issues.

There have also been developments to improve the management of complaints and to make the process more interactive with customers. Thus the steps that will be taken to solve a problem and the length of time that these will take are explained, and a case is not considered closed until it is resolved to the customer’s satisfaction.

In summary, perhaps the biggest achievement of Union Fenosa’s plan has been to put into place a package of measures that has enabled customers to perceive that there has been a major change in the treatment and care they receive from the company, compared with that from other utilities.

Given that neither the product nor its price is much different from competitor utilities, it is crucial that customers feel they are well treated – and that is Union Fenosa’s goal.