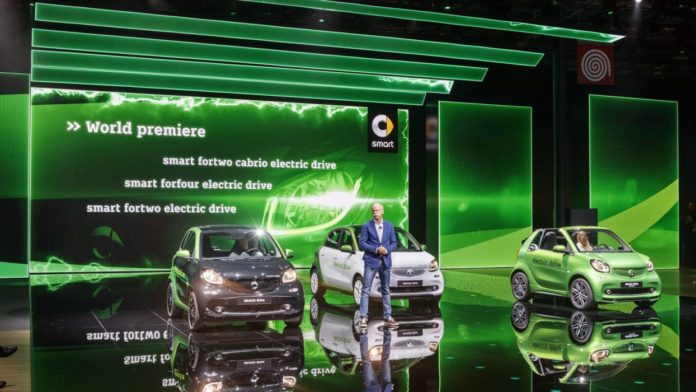 According to media reports, Mercedes-Benz and Smart brands will launch more than 10 electric cars by 2025 and announced the launch of the EQ concept, an electric SUV which will be available from 2019.

In a press release prior to the show, Daimler said: “The smart is the perfect city car, and with electric drive it becomes a little bit more perfect. This is why we will soon be offering our entire range – smart fortwo, smart cabrio and even our smart forfour – as all-electric versions.

“Together with lots of smart fans and enthusiastic drivers of the three predecessor generations, we are looking forward to the unique driving fun offered by the new smart electric drive. And at very attractive prices, especially in countries where there is a buyer’s premium”.

Renault revealed the revised Zoe electric vehicle, which thanks to an upgraded battery, has a range from one charge of up to 248 miles/400kms.

“ZOE will be available for immediate sale with the Z.E. 40 battery enabling it to travel 400km NEDC,” the car manufacturer reported.

The ZOE is one in a wave of longer-range EVs, launched compete with Tesla’s Model 3, which is not expected to appear in serious quantities before 2018.

However, the ZOE is “probably the best and most useful electric vehicle on sale, especially at its price. Doubling the range can only make it more attractive, perhaps not as a family’s only car, but certainly as the default driver. Trouble is, there’s a catch, and that’s a price that will increase by about 2,500 euros across Europe,” says The Telegraph.

Of the increased price, Eric Feunteun, Renault’s head of electric vehicles, says: “It’s a small price to pay for doubling the range.”

According to Feunteun, when Renault first starting building electric vehicles “the question was, ‘is there public charging?’ Now it is ‘is the charge point available and can I pay for it?’.”

Renault is now providing a charge card that should allow ZOE users to recharge at most recharging points.

Volkswagen released its ID electric vehicle concept, with a range of 371 miles and a 25kW electric motor.

“We want to challenge Tesla, Apple and the others in the electric vehicle market,” said Herbert Diess, chief executive of VW, continuing that the ID will be a true, “peoples’ car” with plenty of room on the inside, but compact on the outside.

Augmented virtual reality will control all the functions, “no switches, no sticks, just screens”, said Diess. It will be the price of a Golf diesel and on sale by 2020.