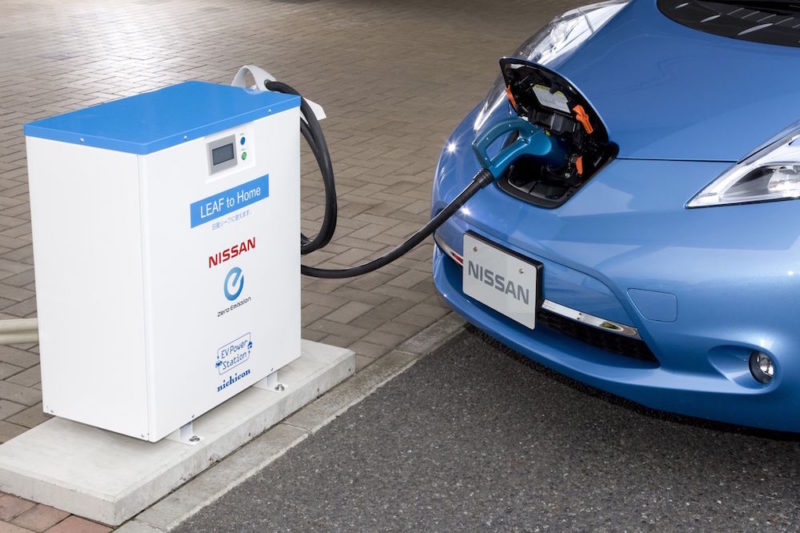 During the trial, 100 vehicle-to-grid units will be installed and connected at locations agreed by private and fleet owners of the Nissan LEAF and e-NV200 electric van.

According to a company release, the partnership agreement between the two companies was signed during 21st UN Conference on Climate Change (COP21).

[quote] The release adds that Nissan electric vehicle owners in the UK will be able to play an active role in grid stability, and will “revolutionise” how power is supplied to the grid.

Paul Willcox, Chairman of Nissan Europe, said: “Today’s landmark trial in the UK is a significant step forward in renewable energy management, helping shape the future of industries, cities and societies. Smart energy management is one of the biggest challenges any nation faces for the future which is why this trial is so critical in assessing the feasibility of using variable, more flexible energy sources. We see Nissan electric vehicles as being the mobile energy hubs of the future, pioneering a self-sustaining energy infrastructure that will help solve the capacity issues of the future.”

“This is the first time this has ever been done in the UK and by enabling customers to sell energy back to the grid, we’re providing a financial incentive to choose the sustainable option.”

Enel and Nissan view the project as having great potential, in that electric vehicles may turn into clean mobile energy units whose unused power can be sent back to the grid to power homes, offices, schools and hospitals.

Ernesto Ciorra, Enel’s head of Innovation and Sustainability, commented: “The installation of our two-way charging technology will encourage the integration of non-programmable renewable energy flows into the grid and will help the spread of electric mobility in the country, benefitting the energy sector and the environment, while also having a positive impact on electric owners’ wallets.

“The fact that Nissan has chosen Enel’s charging technology to trial in the UK is the perfect demonstration of just how much potential the Group’s V2G electric vehicle charging system has to revolutionise not only transport but also the way electricity distribution works.”

The companies predict that if all 18,000 Nissan electric vehicles in the UK were connected to the energy network, they would generate the equivalent output of a 180 MW power plant. If scaled up in a scenario where all the vehicles on UK roads are electric, vehicle-to-grid technology could generate a virtual power plant of up to 370 GW. This capacity is said to be enough  to power the UK, Germany and France.

Steve Holliday, former CEO at National Grid, said: “At National Grid we are constantly looking to the future to ensure we have the capacity to meet national energy demand – it’s our job to future proof the national transmission network. The rapid uptake of electric vehicles is certainly positive yet could also be challenging if we don’t plan ahead.

“One of our future energy scenarios indicates that there could be up to 700,000 electric vehicles in 2020 requiring an extra 500 MW of energy. That’s why we support innovative technologies and pioneering projects such as this one that have the potential to make a real difference to the way we manage energy supply and demand.”