In Europe, Swedish utility Falu Energi & Vatten has announced that it will build the “world’s first climate positive data centre” in conjunction with EcoDC AB, designer of smart data centres based in Sweden.

French energy and automation giant, Schneider Electric, will supply technology that will deliver energy efficient solutions and product to the project, the company confirmed in a statement. 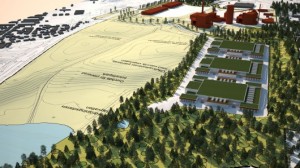 The data centre, which will be situated in the City of Falun, will be powered solely by renewable sources and will use excess heat generated from the centre’s servers and IT equipment to warm the buildings in Falun through the district heating system.

During the summer, excess steam from the local electricity plant will run the machines cooling the data centre.

The EcoDataCenter is envisioned to operate in the most energy efficient way, working in conjunction with an already sustainable energy system, said Bengt Gustafsson, CEO of Falu Energi & Vatten.

“The data centre is significantly more energy efficient than regular data centres and the integration with the district heating and cooling system means that energy is used that otherwise would have been wasted. All of this lowers the costs both for us and for our clients,” said Børge Granli, co-founder of the EcoDataCenter.

The efficient use of resources also assists through the resident heating and cooling system also assists to keep costs down, translating into cost savings for customers.

Sweden is proven as the ideal climate in which to construct EcoDataCenter due to its cold climate, political stability, lack of natural disasters and the country’s reliability of electric supply and abundance of renewable energy sources.

This is supported by the Cushman & Wakefield and Hurleypalmerflatt Data Centre Risk Index, which rated Sweden as the safest location for data centres worldwide, after the US and the United Kingdom.

Marc Nezet, country manager at Schneider Electric Sweden, commented: “We live in an age when more and more people are concerned about the global data center industry’s environmental effects. Internet penetration and the Internet of Things don’t have to happen at the expense of the climate.

“IT security and performance is also increasingly critical for companies and organizations. Therefore, we are tremendously proud to be a part of the creation of this pioneering data center. EcoDataCenter is the show case for green data and shows that it is very profitable to think out of the box.”