Hesitantly, a man in his 50s starts telling a group of around ten people personal details of his behaviour at home. A woman interrupts with questions but soon starts talking about her own experiences and her life at home. Then, a third person joins the discussion and gradually they’re all involved in a heated debate. More and more people join in and in a couple of minutes the initially rather cautious atmosphere turns lively and a group leader has to intervene.

On the surface this could describe a group therapy session. But what actually is happening is something seemingly less intriguing – namely, a workshop where people talk about energy consumption in the home.

USER DRIVEN DESIGN
The workshop was the take-off when a prototype of the IT-based energy service “EnergyCoach” was born. At the core of the design process was the idea that a user driven design would benefit from knowledge, feelings, experiences and opinions from the targeted user group. The purpose of the design was to create an IT-based service to facilitate households to learn about their electricity consumption and implicitly to reduce it. A user driven design approach would increase chances of the validity of the service.

The project team, consisting of researchers and designers, would play the listening and moderating role and ideas were to be formed mainly by the potential users – in this case, house owners in a middle class neighbourhood of a town in Sweden. The project was run by the Interactive Institute in collaboration with Mobile Interaction, Svenska Energigruppen (The Swedish Energy Group) and the local energy provider Eskilstuna Energi och Miljö. Financial support was provided by grants from the Swedish governmental agency for innovation systems, Vinnova, and the Swedish energy agency, Energimyndigheten.

FEEDBACK AND VISUALISATION
In order to build a more sustainable society people’s behaviour will have to change. Household behaviour is commonly pointed out as an important factor in reducing problems caused by increasing levels of CO2 emissions. Households are responsible for approximately 15% to 20% of total energy related CO2 emissions and this proportion is expected to keep rising. Since the seventies, the use of electricity in Swedish households has increased by about 50% and behaviour patterns are considered responsible for a major part of this increase.

Visualisation of energy consumption will play an increasingly significant role in altering people’s energy related behaviour. One problem with information on energy related behaviour today is that its consequences are hidden for a large proportion of the population. In most households, for instance, the only feedback on energy consumption is presented in text on the electricity bill. The meaning of this text is often difficult to understand and it is not delivered frequently enough. Moreover, the bill is usually not read by more than one person in the household. Today, technology allows us to provide instantaneous, continuous feedback on households’ electricity consumption. Feedback doesn’t have to be delayed until the arrival of the electricity bill.

Thus, design and technology for promoting energy efficient behaviour plays an important role for the development of consumer products and services visualising energy use. Even a low tech experiment from the 70s – the Twin Rivers project – illustrates the role of feedback for encouraging energy efficient behaviour. Although its major focus was not on design, it raises issues on visualisation of feedback and how these issues relate to a reduction in electricity consumption. Participants in the study received feedback on their electricity consumption from a manual presentation each afternoon on their kitchen windows. Results showed that households receiving feedback reduced their electricity consumption up to 15.7%.

The Twin Rivers project is considered classical in pointing to feedback to households as a critical factor in reducing their electricity consumption. Effects of feedback on energy conservation behaviour have recently been the focus of a considerable amount of research. Sarah Darby at the Environmental Change Institute at the University of Oxford has concluded that the norm for savings from direct feedback – from a meter or an associated display monitor – ranges from 5% to 15%. 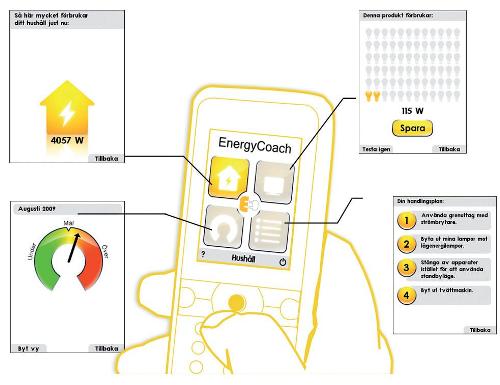 IMPORTANT PROPERTIES OF SERVICE
As the user driven design process of “EnergyCoach” evolved and people got to know each other, their involvement was focused on their reflection of their energy use in the home and the problems and needs associated with this. What do users want to know about their own energy consumption? Some people had very detailed knowledge on their consumption, while others were hardly aware at all of how much they consumed. Driving questions from the project team were concerned with what, where and how. Eventually, ideas were formulated on the basis of two workshops. This incorporated five important themes that emerged from the workshops. These were:

For a third workshop the project team refined ideas, integrating these themes into different concepts for an energy feedback service. In this workshop the user group was asked to evaluate concepts. This evaluation resulted in a winning concept, which subsequently became the prototype service “EnergyCoach”. A paper simulation of the prototype was produced and subsequently brought to the users’ homes where it was evaluated.

THE SERVICE ENERGYCOACH
The resulting concept integrates a mobile and a web based application providing households with information on energy consumption specific to their particular household. Users of the service may find out how much electricity different appliances in their home use and decide which actions their household would have to perform in order to reduce consumption. They are coached in saving energy in a similar way to how people trying to lose weight may be coached through various programmes in reaching their goals. Users of EnergyCoach receive feedback on how their electricity consumption relates to a consumption goal, specified by themselves. This feedback and feedback on consumption in real time is provided by their mobile phones and the web application. Individual action plans are also encouraged by the service. Technology used in EnergyCoach rests upon the smart metering system and a system of measuring electricity usage in real time.

A digital prototype of EnergyCoach was tested by 20 households during the early summer of 2009. Ten of these household belonged to the group that had been involved in the concept development and ten households were new to the service. Interviews were also conducted with six households. At the writing of this article data from the user tests are still being analysed. A quick summary of data so far indicates that the most appreciated feature of the EnergyCoach prototype was the icon visualising electricity consumption in real time. People also thought that the chart showing how much specific areas of the household consumed would be useful for them in the future. The opportunity to specify their own goals was appreciated by some households, but not by others. This probably has to do with the fact that goal setting triggers competition, which is attractive to certain personality types but not to others.

HOME DESIGN AND GAMES
The Energy Design group at the Interactive Institute in Sweden has been experimenting with the visualisation of energy consumption since its start in 2004. Several prototypes of visualising energy flow have been developed and behavioural studies conducted. One example is the Power Aware Cord, which displays the amount of electricity passing through it at a given moment. Another is the flower lamp, which opens and closes depending on the amount of energy being consumed.

Advantages for using interactive technology include the possibility of providing quick feedback in the consumer’s preferred platform, e.g. PC, laptop or mobile phone. Advances in augmented reality and ubiquitous computing shows promise and new computer games have the potential to make ordinary contexts into sophisticated learning environments. Pervasive games are a relatively new class of computer games that extend the gaming experience to the real world. In these games the players are framed by real life contexts and interact with computer enhanced artifacts. This approach has attractive properties from a learning and behavioural modification point of view, since learners do not have to rely on simulation and tasks can be carried out in the real environment. According to some the primary importance of pervasive learning games lies in the social processes that connect learners to communities of devices, people and real learning situations.

Acknowledgements: Sara Tunheden and Carin Torstensson participated in the development of EnergyCoach.