The European Commission in its 2008 paper on water scarcity and drought stressed the value of water-metering as a measure to promote water efficiency. While metering has been a subject of controversy in the past, particularly in the UK, many EU member states have compulsory metering in private homes. Green campaigners argue that water-metering is essential to improve water-efficiency because it is the only way to measure leakage. Water-metering also contributes to efficiency by helping national and local governments to price water correctly so as to manage demand. It has been suggested that households with a water meter fitted use about 20% less water than those with no meter fitted.

However, either by way of retro-fitting or the installation of new meters, the installation of water meters that allow for two-way communications has not received the attention or drive that Smart Metering and AMI infrastructure has in the electricity sector. There are many reasons for this, both technical and legal, and even to this day, a sound business case for smart water metering is not easy to make.

In an interview with Smart Energy International, Mr Eric Goetz, Project Manager for Saur’s customer telemetering projects, provided an overview of the company’s work in Smart Metering in France.

The Saur Group is one of the three leading and established providers of outsourced services for local authorities in the water and waste management industries in France. It has grown from a local operator focused on water services contracts to an established provider of water and waste management services. It has also expanded its operations across France and overseas, and broadened its customer base to include both local authorities and industrial customers.

LES SABLES D’OLONNES
Saur’s first venture in Smart Water Metering began in 2002 in the French city of Les Sables d’Olonnes. In a European-first, Saur decided to explore the possibilities of a two-way communication based telemetering system, based on a number of factors. Les Sables d’Olonnes is very much a vacation city, with lowinhabitation during off-peak periods. In and of itself, this posed a great challenge to the local authority as they could not establish regular access to properties year-round in order take readings. Meter reading was previously a laborious and time-consuming By Nicholas McDiarmid, Editor Smart Energy International practice as meters were often located within buildings or homes, and inhabitants needed to be on-site in order for Saur employees to personally read the meters. In addition, Saur was confronted with an additional challenge: how to check all water meters quickly and efficiently in order to measure water consumption from any given day and send all invoices at the same time. Delays in sending out invoices led to complications in the accounting and metering departments, as well as bills which did not reflect the real status of customers’ usage. Currently in France, there are two invoices per year, one on estimated consumption and the other on real consumption.

According to a survey conducted by Saur, 96% of their customers would prefer invoices based on their real consumption. According to current French law, a water utility is only required to make one meter reading a year. This has served to block the adoption to a certain degree and makes Saur and their client’s decision to become early adopters even more meaningful.

RADIO TECHNOLOGIES
Saur conducted an exhaustive study of radio technologies available on the market for deployment in Les Sables d’Olonnes and eventually decided that Wavenis, a technology developed by Coronis (part of the Elster Group), with ultra-low-power, longrange radio solution was the wireless platform that best fitted their needs. “The fact that Wavenis technology is bi-directional was a determining factor in making our final choice,” says Eric Goetz, Saur’s Project Manager for customer telemetering deployments. “It means two things: Wavenis enables us not only to make sure that the information has been received, but also to check the meters whenever we need to.” Other key determining factors were the long range and low-cost properties as well as the fact that Wavenis is a field-proven technology. That the technology was developed in France was also important given the fact that Saur was about to add a new component to its capabilities. “When you are learning something new, it never hurts to literally speak the same language,” added Goetz. 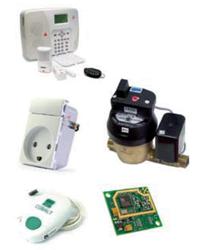 Some of the many products that
use Wavenis technology

A NEW EPOCH
According to Goetz, the use of wireless technology and its associated network is helping lead to the evolution at Saur, and for the water industry as well. “Since the venture in Les Sables d’Olonnes, which was the original AMR network, we have installed several project sites, most notably three networks in France: Ars en Ré, which has 11,000 points, Razac sur L’isle, which has 20,000 points and Sainte Cecile Les Vignes, which has 30,000. This means that Saur is now managing a communications network with the potential to offer a number of new services.” These include leak detection – for both end-users and for organisations that monitor water networks, alarms for tampering, ability to monitor your consumption online, and other services that enable water conservation. Goetz observes that a primary motivator in installing these networks is really preparing for the future. “Obviously immediate benefits include more accurate meter reading, but the real advantages we are preparing for is in being able to offer local authorities,our customers, a range of services that may be legally required, either on a national level or as mandated by the European Union. If you look at it, Smart Metering is actually too expensive right now, and one cannot expect end-users to pay for it, so it is not really a rational choice. In essence, we are future-proofing.” At this time it is not easy for water utilities to realise a return on investment. The primary intention for Saur is to be able to offer these services as and when its customers require them.

From an organisational point of view, the wireless data transmission technology has enabled employees, who are dedicated to meters, to spend more time on service enhancing projects such as network maintenance or customer care. Other benefits as a result include Saur’s ability to offer services that support water-saving programmes, thereby benefiting both its customer base and the environment. In fact, the ability to help customers economise water is directly related to its ability to closely monitor the customers’ water consumption and alert them of any suspected leaks or inconsistencies. 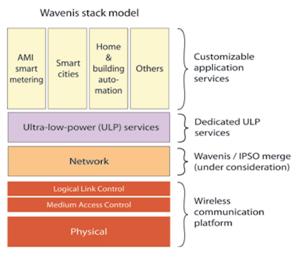 The collaboration between Saur and Coronis has evolved since 2002. In 2007, Saur added the Wavelook product from Coronis to its offering (called DOMOVEILLE™). Based on Wavenis technology, DOMOVEILLE™ is an in-home battery powered display device that allows customers to view their own consumption levels first-hand. In 2007 two major events occured, Coronis launched the Wavenis Open Standard Alliance and Coronis was acquired by Elster. The Wavenis-OSA is designed to foster both innovation and cooperation amongst its members. “At Saur, we think that the creation of the Wavenis Open Standard Alliance and the addition of the Elster to the mix were very important,” explains Goetz. “These events provide the guarantee that the technology in which we invest is going to be relevant and long-lasting. It is our responsibility to be able to tell our clients that we do not develop proprietary technology which would bind them to us uniquely.”

CHALLENGES
According to Goetz, one of the key challenges in deploying the network has been internal: “We have encountered natural resistance to this new technology. Water utilities have been very slow to change with regards to adopting wireless networks into their product mix. And the same applies to Saur.” In essence, companies like Saur are entering a new market entirely: managing wireless networks, as is the case globally for other companies and utilities exploring this market.

THE WAVENIS OPEN STANDARD ALLIANCE
The Wavenis Open Standard Alliance is an independent, non-profit, technology standards organisation that was created in 2008 with the mission of opening and standardising Wavenis technology for the market. It is also responsible for managing the Wavenis technology roadmap. Coronis and Orange, the two founding members, as well as other members are leaders in the various branches of the M2M spectrum, bringing their wealth of experience and expertise together to the benefit of the alliance. Wavenis-OSA is defining the specifications for the Wavenis communication platform as well as working to define service applications to meet market demands.

SCALABLE WIRELESS MESH NETWORKING
Wavenis-enabled wireless products support mesh network configurations scalable up to any size. Data exchange can be partially or entirely automated, depending on the application. Wavenis wireless technology provides the ultra-low-power and long-range connections required by today’s most demanding networked devices, including: