Home Regional News Europe & UK Gaz and Leccy to campaign for acceptance of smart meters across the...
Facebook
Twitter
Linkedin

Smart Energy GB has introduced Gaz and Leccy to the UK public as part of an advertising campaign to rally support for smart meters.

The government organisation, which is funded by energy companies hopes to position smart meters as a platform for the connected home. 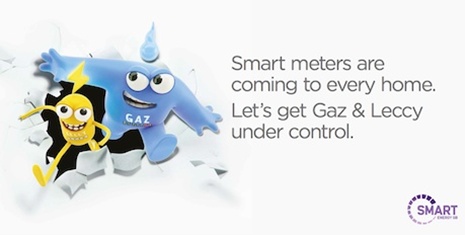 As part of a GBP85 million seven-year marketing plan, the campaign will highlight how smart meters can transform relationships between consumers and energy companies.

The campaign includes print and TV ads which address homeowner concerns through the characters of Gas and Leccy.  According to a report in ‘Marketing Week’, “a coolly delivered voiceover urging people to ask their energy provider for more details will offset the chaos caused by the duo.”

Says Gavin Sheppard, marketing director, Smart Energy GB:  “What we’re doing needs to be serve as both the pirate and the navy. Our ads need to surprise consumers and challenge their perceptions but also have an air of authority and credibility.

“The key message is that this roll out is going to finally let consumers get their energy consumption under control and help address the bemusement often experienced when engaging with the sector. To do that, we’ve tried to show how smart meters are not just a product but a platform for how people can change their lifestyles in the connected homes of the future.”

It could be easier said than done after recent research raised doubts over the likelihood of reaching the 2020 target. While most people (84 per cent) have heard of smart meters, according to a report commissioned by Smart Energy GB, fewer than half (44 per cent) want one.