In Germany, as elsewhere in Europe, the common keyword for “intelligent” measuring devices is “smart metering”. But we have to ask ourselves whether there is a common understanding of the term. In Wikipedia there is not a single entry on smart metering, but there is one for smart meter: “A ‘smart meter’ generally refers to a type of advanced meter (usually an electrical meter) that identifies consumption in more detail than a conventional meter; and optionally, but generally, communicates that information via some network back to the local utility for monitoring and billing purposes (telemetering).” The next sentence is also very important: “The term ’smart meter’ typically refers to an electrical meter, but the term is also starting to be applied to the measurement of natural gas and water consumption.”

With the integration of gas, water and heat (where available), we take the step from “smart meter” to “smart metering” and lay the foundation for an advanced metering infrastructure (AMI). In this light smart metering is defined as follows: 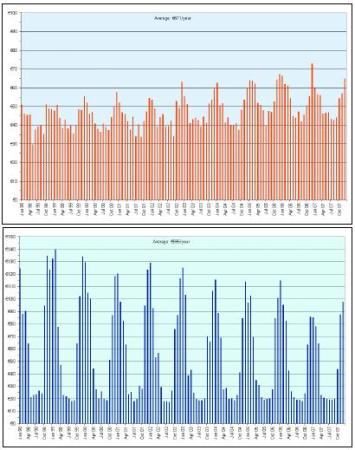 In recent years there have been considerable smart metering activities in some European countries, where communicative measuring devices have been brought into the field in major projects, or even nationwide. This was the result either of national legislation or economically reasonable business models. A common factor among pioneering countries in this field, such as Sweden and Italy, is that natural gas plays no significant role in energy provision for domestic use. The situation in Germany is totally different, with approximately 18.2 million apartments – 48 percent of homes – equipped with a heating system based on natural gas in 2006.

Consider as an example the energy consumption for an apartment using electricity and natural gas for the last 10 years. Rated with a common tariff, the costs for gas were higher than those for electricity (Figure 1). Even if this is not always the case, in Germany the annual costs of a gasheated apartment are at least similar to the same household’s annual costs for electricity.

This indicates that in Germany to restrict advanced measuring for residential purposes solely to electricity would hinder the customer’s ability to act on and receive benefits by optimising his heating system – the benefits being lower energy consumption and consequently lower energy costs and less CO2 output. 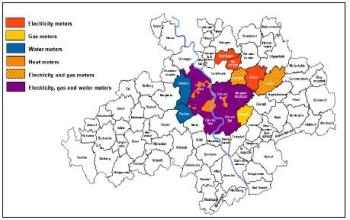 RheinEnergie AG in Cologne, with its grid operator Rheinische Netzgesellschaft mbH (RNG) is a typical German multi-utility. It has a total of more than 1.2 million meters, of which about two-thirds are in electricity and one-sixth each in gas and water (Table 1). The synergies in meter management (e.g. installation, meter reading, regular exchange) result in a significant overlap in the geographical allocation of the different types of meters (Figure 2).

This would suggest that the synergies of a multi-utility meter management only exist after a rollout of smart meters, when every meter in the service area is connected into the smart metering architecture. This is demonstrated very neatly by the approach in the Netherlands, in which minimum standards have been developed for communicative meters for electricity, gas, water and heat (including cooling) and their interoperability in a smart metering system. While initially, because of the complexity of the task, only the introduction of smart metering for electricity and gas has been defined as mandatory, Dutch grid operators are tending more and more to also implement water meters into their systems, because of the improved benefit with a total system infrastructure.

REQUIREMENTS FOR A FUTURE-PROOF SMART METERING SYSTEM
Extensive market research done by RheinEnergie since mid-2006 has led to the conclusion that, up to this point, there is no single smart metering system in Europe for electricity, gas, water and heat meters which meets the following, future-proof criteria:

The Dutch approach, although moving in the right direction, is not a blueprint for Germany. The choice of the electricity meter as the communication gateway and as master for the other meters is not appropriate, as it is in contradiction to clean system architecture. Furthermore, German legislation on metering transfers the responsibility for the meter from the grid operator to the meter operator. Therefore, logical responsibility must find its counterpart in actual assembly structure.

With the transferral of Directive 2006/32/EC on energy end-use efficiency and energy services into national legislation in Germany, the legal framework for smart metering, which until this point has been undefined, becomes fixed. But although German legislation has only recently confirmed the intention to promote smart metering, the industry has not been idle. There are four major activities working to reach the goal of a media-neutral, economically feasible and future-proof smart metering system (Figure 3).

Starting with the results of the field test of the new eHZ meter in Germany (an electronic 1 or 3 phase electricity meter for residential customers, which is mounted on a special socket to enable quick and easy exchange of the meter without interrupting the circuits), the Verband der Netzbetreiber (VDN – Association of German network operators) pointed out the need to develop a manufacturerindependent communication standard for electricity, gas, water and heat meters. A project group, named Multi Utility Communication (MUC), was set up with the task to define the requirements for a media-neutral communication infrastructure from measuring device to back-end system (Figure 4). With the fusion of the major German utility associations for electricity and gas into the Bundesverband der Energie- und Wasserwirtschaft (BDEW – German Association of Energy and Water Industries) the group, which originally consisted of electric and multi-utilities or grid operators, has now been expanded with colleagues from the gas utilities. This is a fine example of collaboration and indicates the awareness that solutions can only be found through the cooperation of the different energy industries.

Almost concurrently some large and medium-sized municipal-based multi-utilities in Germany have also teamed up to form a community of interests named the Smart Metering Initiative Querverbund (SMIQ – multi-utility smart metering initiative). This community now comprises approximately 20 companies. Its scope is a common understanding of smart metering systems and the results are passed on to the MUC group. 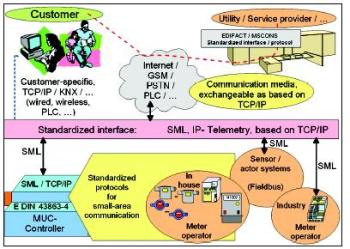 As a result of suggestions both within the market and the associations, Bundes- vereinigung der Firmen im Gas- und Wasserfach (figawa – German association of companies in the gas and water industry), Zentralverband Elektrotechnik- und Elektronikindustrie (ZVEI – German electrical and electronic manufacturers’ association) and supported by the KNX Association (promotes the KNX standard for home and building controls), the meter manufacturers active in Germany have gathered together under the name Open Metering Communication (OMC). The requirements of MUC/SMIQ will be put in concrete form and transferred to product specifications on the basis of existing standards, wherever possible. The working groups within OMC have as their priorities the communication interface for the measuring devices (field area communication) and the specification of the MUC controller for transporting the data to the back-end systems.

Last but not least the Deutscher Verein des Gas- und Wasserfaches (DVGW – German technical and scientific association for gas and water) has initiated a project group, PK ZdHGM, to study the future of residential gas measuring. Its results will also be passed on to the MUC group. One of its specific tasks is to describe how shut-off valves within, or attached to, gas meters will allow safe gas flow after a remotely addressed release of disconnection.

Now that things have started moving in Germany since the beginning of 2007, all participants have committed themselves to an ambitious timetable:

CONCLUSIONS
Even before Germany had introduced the legislative changes, it had evolved a forward looking understanding of smart metering with an outlook to AMI.

The introduction of a standardised medianeutral smart metering system offers an equal platform for established players and new entrants to the market.

If the smart metering system is to evolve into an AMI with maximum benefits to all parties, it is absolutely necessary to integrate every energy or consumption measuring device. Otherwise the aims of the European Union on energy enduse efficiency and energy services will not be successful.

It appears that the aim to have ad hoc data of every single meter accessible in seconds at the customer’s demand is one of the key issues in public acceptance of the system. But this has to be balanced by the requirements of the technical solution and economic efficiency. In order to keep the whole system affordable the demands made upon it should not be made too high.

As has been discussed above, Germany has moved on smart metering. The Netherlands is well on its way, France is planning for the future and the UK is considering the technical architecture for a domestic smart meter system. All of these countries have similar ideas but the differences between them are sufficiently large to exclude interoperability. However, some of the parties involved operate in more than one country and do not want different systems. Contact on a personal basis and exchange of documents is helpful but will not lead to a general commitment. Perhaps it will be possible to create a European solution through a collaborative project to develop open access standards for smart multi-metering services. 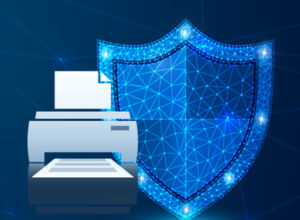