For new AMR projects entirely based on GSM, SMS is an innovative solution that offers many advantages. GSM/SMS is already used in water and gas C&I metering; now that this technology is also available for smart electricity meters, it is likely to become the standard solution for all key customer remote metering.

The introduction of competition in the electricity supply industry set technical challenges in remote metering. Network codes had to be introduced to govern the interaction between suppliers, transporters and vendors of electricity, and the demand from the main commercial and industrial (C&I) customers had to be monitored daily.

Considerations such as load balancing, peak demand, network performance and tariffs meant that the large users’ profiles of consumption (typically half-hour readings) had to be recorded and transmitted daily. The number of these meters and demand profiles to be read was typically between 5,000 and 100,000.

Traditional AMR systems which use short range RF transmission to a local data concentrator could not be used economically, because C&I meters do not have the density of residential meters. Most utilities opted for a telephone-based outbound system, where a telephone modem is connected to the serial port of each C&I meter and the meter is called daily by the data collection computer, although other forms of public network such as wireless X25 have also been used.

When remote metering solutions for C&I meters were first implemented, the cost of installing a telephone line was acceptable. Today GSM is truly a global form of wireless communication, with almost total coverage in most developed countries. Competition has brought down the cost of both hardware and communications, and GSM has gradually become a challenge to earlier solutions.

GSM had the merit of not needing a phone line, and overall costs are now generally lower than PSTN. The primary aim of the GSM networks originally was to service voice calls, but most people now own a GSM phone and the revenue from the voice business is stagnating. Operators and hardware developers have therefore turned to new GSM network services, including machine-to-machine communications (M2M), text messaging (SMS) and GPRS. M2M services today represent a major opportunity for growth for the GSM business world and GSM has become a viable and competitive form of data communication.

Remote metering of C&I meters is comprised of a smart (interval) meter with serial communication and often IEC 1107 protocol, plus PSTN/X25 modem and outbound polling server (see Figure 1). Early attempts to introduce GSM technology to remote metering employed a GSM modem as a substitute for the existing telephone line, by ‘emulating’ a telephone modem; it was therefore compatible with existing data collection systems. The latest developments in GSM call for a review of the available technology, to help select the most suitable communications mode. The choices are as follows:

Data Calls. Using a GSM modem connected to the meter’s serial port, the data collection computer calls the meter and a virtual circuit is made between the computer and the meter. The computer can then proceed to exchange data with the meter, as it would in the case of a telephone modem. Because the system is outbound the GSM modem must be powered all the time to be available to answer the call. This method is compatible with existing AMR systems for C&I electricity meters as the computer will poll the GSM device in the same way as existing telephone devices, but there are disadvantages.

SMS (text messaging). This involves a block of up to 160 characters (an SMS) being sent or received using the GSM phone. The SMS handling is done by a network of computers managed by the network operators, called SMSCs, which receive and deliver the SMS to and from mobile phones. In AMR applications, the GSM device can communicate with the meter locally and package the data into an SMS, which it then sends to the data collection computer.

This system is inbound, and the GSM/SMS device can be switched off during periods of inactivity, which greatly reduces its power consumption. The SMS method of data communication is well suited to interval and other commercial meter reading, as the small amount of data is contained in one text message. The reading is sent to the GSM network, an acknowledgment from the network is received, and the device can be switched off until the next day. The SMS is securely held in the SMSC of the operator and is recovered by the data collection computer, provided it is linked in a suitable way to the SMSC through a high speed permanent connection (see Figure 2).

The GSM network is designed to handle millions of SMS messages and all GSM devices can send their SMSs almost simultaneously. The system is completely scalable and the hardware required at the data collection computer is simply one link to the GSM operators’ SMSCs.

One advantage of using SMS in an inbound system is that the GSM/SMS device is not required to wait for a call, and so does not need to remain powered. The device wakes up once a day, determines the data to be transmitted by communicating with the meter, transmits an SMS, and then turns itself off. Battery powered solutions using this technique already exist for water and gas meters that cannot provide power to the GSM device; this is a distinct advantage to multi-utilities wishing to have compatible solutions for all their meters. 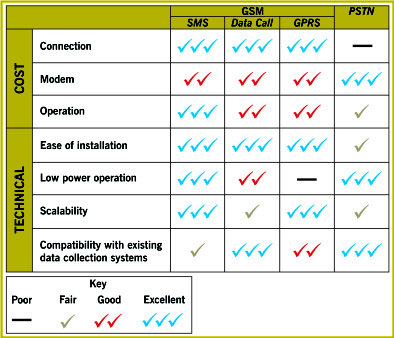 Another advantage of using SMS is the technique’s relative immunity to poor network coverage. Users of mobile phones know that they can send a text message even in areas where coverage makes it impossible to maintain a voice or data call.

Finally, there are significant financial benefits. SMS can be bought in bulk and can cost as little as €0.03. The cost of communication is also predictable, as each device sends a known number of SMSs per day. However, there are also some disadvantages – the GSM device needs to support the individual protocols of each type of meter and existing outbound data collection systems will need to be modified to support inbound SMS.

GPRS. The GPRS service was introduced to provide improved communication speed between two computers using the GSM network. The targeted use of this service is for access to web-based services from a laptop or PDA.

GSM operators have made major investments in upgrading their base stations to support GPRS and they have strongly promoted this service. This has resulted in misunderstandings in the metering industry regarding its suitability for AMR. GPRS is particularly suitable for applications that require the connection between the two remote computers to be always on, such as e-mail messaging, web browsing from a PDA and exchanging relatively large amounts of data. For these reasons GPRS tariffs tend to be based on the amount of data traffic rather than the length of communication. There are no known advantages to using GPRS in an interval metering application, since the data to be transmitted is relatively small (a few hundred bytes) and is only carried out once a day. GPRS, however, could be considered in special applications such as real-time monitoring of demand, where constant communication is sustained with every meter site.

GSM has become a convenient and low-cost form of data communication for the remote monitoring of C&I meters, and should support both data calls and SMS transmission methods. In existing PSTN-based meter networks, where GSM data calls will be used for compatibility, this solution will benefit from specific improvements to the unit’s design, such as deriving power from the meter where available, and an integrated GSM antenna and automatic detach/re-attach from the network for maximum reliability.