Around that time, and prior to the social and economic changes in 1990, prices began to approach actual costs. Due to the socio-economic transformation taking place during the transitional years thereafter, the number of customers unable to pay their bills started to increase rapidly. After privatisation in 1995-96 for the companies which were commercialised, the realisation of the full income became of primary importance.

The importance of the problem has further increased in the course of the 10 years which have passed since privatisation, and the timely settlement of public utility bills has become a problem involving many customers. At the same time, the attitude of the companies concerned is also rigorous. In the following article we will review the handling of household electric energy customers having outstanding debt and those already disconnected from supply due to arrears, and the approach of the problem from a new angle.

ARREARS AND DISCONNECTION
Exact data is not available on the number of arrears, i.e. on the total sum outstanding on overdue bills at any specific time. The main reasons are:

It is easier to determine the number of customers disconnected due to arrears and the total average sum of their arrears. According to the data from a special study made by the Customer Protection Department of the Hungarian Energy Office in 2005, of the approximately 5 million recorded household electricity customers 64,000 customers were disconnected from the power supply with a debt totalling 1.9 billion HUF (US$10.7 million).

Disconnection, as a means of handling arrears, is unfavourable for both the customer and the supplier. For customers it has a psychological significance, in that they do not have access to their customary, daily energy supply. The social dangers and damages of such a situation are high. It is also bad for suppliers, who may not receive their money.

Even if a customer is socially in need and is disconnected from the supply due to arrears, then pays the disconnection and reconnection fees, and is given the option to settle his debt in instalments, the payment of the instalments along with the payment of his continuing consumption together is a major burden, effectively resulting in a ‘double electricity bill’, and may generate further arrears and further disconnection. This experience has finally resulted in the idea of bringing prepayment meters into general use. 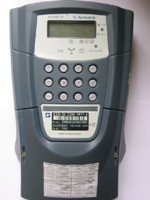 INTRODUCING THE GENERAL USE OF PREPAYMENT METERS
There is agreement in the relevant circles of the state and the supply companies that those in need should be supported in some way in order to prevent them from falling out – in the worst cases permanently – of the supply system. At the same time, opinions differ as to how to support them, whether by discounted prices or in another way.

If the prices do not cover the full costs of supply, this will result in the short term in a disinclination to invest in the sector, and in the longer term could jeopardise the whole supply system. Bearing this in mind, the decision makers have adopted the attitude that those in need should be supported in a way which does not reduce the income of the suppliers.

Government resolution No. 1048/2004 (V.14.) on the measures serving for the reduction of the indebtedness of the population can be considered as the first practical step in this regard. Based on this resolution the Ministry of Social Affairs and Labour (SzMM) in 2005 initiated a oneyear experimental project entitled “Bringing into general use prepay meters among electricity customers in need”.

SzMM carried out a nationwide survey on the expected demands, although this was limited only to the towns due to the lack of a network of supporting rural institutions (family help centres). Household electricity customers in arrears could apply for participation in the project if they were qualified as socially in need by their local authority. In terms of the project they were allowed to consume 110 kWh of electricity per month free of charge. The price (including VAT) of this amount of electricity was paid by the state budget to the public utility electricity suppliers. Simultaneously, the customers were also given support to reduce their outstanding electricity debt, which was also paid by the state directly to the supplier. The customer was not given any support in the form of cash. The cost of any expected consumption over the fixed monthly 110 kWh allowance (the volume was optional, fixed in advance, either 30, 60, 90 or 120 kWh) was paid by the customer to the supplier in advance.

SzMM had fixed resources for financing the experimental project, which was sufficient to procure and to use for one year 1,084 prepay meters (for the consumption of 1,320 kWh per customer – free of charge). All the six Hungarian electric energy suppliers (otherwise owned by three different owners) undertook to procure the prepayment meters, pre-financing half of their costs and the cost of installation. The other half of the cost of the meters was covered from the state budget.

After one year, at the end of the experimental project, the experiences were assessed, with the finding that the participating customers were generally satisfied with this method of electricity consumption. Ninety-six percent of them declared that they did not regret their participation in the project, and that their power consumption had become more economical. They mentioned as a disadvantage the complicated administration of the ‘recharge’, i.e. the consumption over the fixed 110 kWh. Seventy-five percent of the customers decided to keep the meter, even with the modified conditions as described below.

AMENDMENTS EFFECTIVE FROM 2007 AND FUTURE CONCEPTION
The government considered the one-year experimental project so successful that it raised and has made available permanent resources for its expansion. The circle of customers entitled to the support has also changed, and customers who have been disconnected from the supply and who receive the so-called housing allowance may also apply. The free 110 kWh monthly consumption does not exist any more, and the customer may apply for a housing allowance (or for a part of it) in the form of electricity. Separating the project from the family help centres also opens the possibility for customers living in villages to participate in the programme, thus extending the access to support based on social qualification. The meter is provided by the local authority for the customers in need, and they may seek reimbursement from the state of 90% of the purchase price of the meter and its installation costs.

The goal of the SzMM is that customers in need may receive prepayment meters on a preventive basis, i.e. not only after disconnection. The Bill initiated by the minister to amend the law in this regard will be realised in the new Act on Electricity to become effective on 1 January 2008. To ensure access to electricity on a social basis would be only the first step. A further aim is that prepayment meters be accessible within market conditions, thus promoting the realisation of more economical, more conscious consumption. In order to simplify recharging it is indispensable to establish a sales network. Finally, SzMM is also striving to bring into general use, as necessary, prepayment meters in the gas supply sector.