Having the remit to review the legislative, commercial, social and cultural influences on service delivery, the CEN Horizontal European Services Standardization Strategy (CHESSS) initiative was conceived as a means of researching the feasibility of taking a generic approach to service standardization. Undertaken in the context of the Services Directive, although not directly related to it, the 18-month study will report on the potential for standards to enhance the delivery of services across national borders and will propose a programme of future standardization and related activity designed to optimise that influence. CHESSS will seek to determine to what extent the requirements for future standardization could be met by a finite number of horizontal standards addressing the fundamental aspects of design, information provision, payment and problem resolution in specific relation to service provision and focused on customer expected outcomes rather than procedural issues.

The CHESSS consortium members – Denmark, Estonia, Germany, Netherlands, Spain and United Kingdom – are undertaking a programme of detailed research and interaction with stakeholders in the services sector. Currently at the midpoint of the project, CHESSS has just held a series of threeday “World Café” style discussions around the EU in London, Tallinn, Copenhagen and Madrid, to encourage constructive, informed debate between the potential beneficiaries and to promulgate awareness of the potential benefits of service standardization. In these CHESSS sought to encourage the widest possible participation by service providers and customers alike. It is expected that the combined outcome of the research and workshops will be recommendations as to the nature and direction of future service standardization in Europe.

For obvious reasons, one of the most exciting areas of interest centres upon customer satisfaction monitoring and assessment. Understanding customer satisfaction should be a critical goal for all organisations. To facilitate this and action to increase satisfaction, a number of different methods have been developed but in order to develop achievable applications capable of delivering real results, it is essential that a range of criteria be taken into account. It is in the area of establishing the nature and specification for the most appropriate criteria that standards may have a role to play, particularly if the ambition is to compare and benchmark the results. The emerging interest in customer satisfaction indices worldwide is testament to such a trend.

When customers and service providers reach an agreement on the delivery of a service, this is generally on the basis of meeting customer needs. Subsequently, however, the customer subtly shifts focus towards their expectations in relation to the nature and outcome of the service, often never actually communicating this to the provider. More significantly, judgement on the service actually delivered may well be against the yardstick of those expectations rather than against the needs that were originally used to define the service. In this context failure to meet expressed needs is likely to lead to complaint, whereas failure to meet expectations is more likely to engender decision to switch provider, often without notice, and once dissatisfaction takes root, many customers simply do not go back to the discarded provider for future service.

At this juncture, it seems appropriate to draw attention to the fact that, not withstanding the decision that the CHESSS initiative should undertake review of “customer satisfaction” and “complaint and redress” as separate studies, they are in fact all stages on the expectation continuum, with complaints handling, redress and alternative dispute resolution (ADR) at the closing end and satisfaction assessment somewhere in the middle. Our emerging interest, however, is on the earlier stages and whether it is practicable to develop interaction techniques that encourage customers to inform providers with regard to their expectations and facilitate the monitoring of waning customer satisfaction, by providers.

This is likely to prove a difficult task but the damage done by dissatisfied customers who do not complain has been well documented and therefore the task is considered worth the effort. It is generally acknowledged that unhappy customers are more than twice as likely as their satisfied counterparts to tell others of their experience. In addition once migrated to dissatisfaction, customer views on the performance of service providers are likely to reverse only slowly and often only in response to considerable investment of resources. The cost of attracting a new customer is likely to be significantly higher that that of retaining an existing one and the impact on the bottom line from failure to adequately address customer satisfaction prior to the complaint stage is therefore likely to be significant.

BILLING AND METERING
Initial research undertaken in the “billing and metering” module suggest that concerns arising from perceived difficulties in processing payment for services received across national borders could well be a contributory factor to the European citizen’s apparent reluctance to use such services. It is therefore appropriate that work be undertaken to determine the extent to which European standards for billing and billing processes might alleviate those concerns. It is also apparent that “innovative (smart) metering” is viewed as a subject with the potential to deliver significant benefits but there is perhaps a lack of clarity as to what those benefits might be.

It is essential to recognise that the smart meter is just part of a system, consisting of meter, display units, communication protocols, methods of communication and interface with billing mechanisms, all of which need to be effectively coordinated if the potential benefits of introducing such metering are to be fully realised.

It is clear that there can be efficiency and cost reduction gains for service providers in some service areas in the introduction of a smart metering programme and some convenience benefits for service customers in participating in such schemes. However, it is in their potential to inform and influence service user behaviour patterns in the medium to longer term that the significant benefits to society as a whole will be found.

There is evidence to suggest that smart meters could contribute significantly to the encouragement of energy efficient behaviour on the part of customers. Such changes in consumption patterns could help them to reduce their costs generally and also provide added assistance to vulnerable users such as the elderly. This same information would, in turn, enable service providers to manage demand to the end that they could cut costs and improve the effectiveness of their businesses, as well as meeting ever more pressing, environmental objectives.

A significant blocker at the present time would seem to be that the case for investment in smart meters requires that the benefits to society, customers and providers have to be included in the equation if it is to be financially viable but so far no stakeholder seems to have sufficient incentive to make the first move. This situation is aggravated by the lack of a clear definition as to what the essential functionality of a smart meter might be (Figure 1) so that customers have no clear view of the potential benefit. 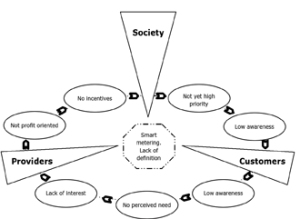 The nature of the technology involved means that almost any information package could be made available but it does require some basic research to determine what that information package should contain and how best to present it to encourage the desired shift in customer behaviour. Also a standard protocol would be required to ensure that not only would all meters provide a set of basic common functions as a minimum but also that they would be fully interoperable to avoid stranding in competitive markets. These two aspects, information provision and interoperability, therefore are likely to be at the heart of the CHESSS recommendations for the payments area of service provision.