As outlined in this year’s issue #2 article on PRIME, prototypes are beginning to be tested on field. A Medium Access Control (MAC) layer, and a whole set of different convergence layers (CL) to cover related industry applications have been produced.

Iberdrola is deeply involved in a project that gives a solution to a remote meter management mandate on its whole electric meter installed base. The Spanish Ministerial Order ITC/3860/2007 sets the obligation for all utilities operating in Spain to replace all their meters below 15 kW with new smart meters by 2018. This implies the rollout of around 10 million new units in the case of Iberdrola. The consortium formed by Iberdrola along with Advanced Digital Design, CURRENT Group, Landis+Gyr, STMicroelectronics, uSysCom and ZIV Medida has been working hard to produce a set of specifications that may get the best result out of the previously designed physical layer, and with the constraints imposed by the different low voltage networks targeted within this effort.

Technological evolution of the grid, both in electric and telecommunication terms, will be key for the transformation of utilities’ business and a shift in customers’ attitudes towards electricity supply. Powerline Communications (PLC) will undoubtedly play a key role for the interface to customers, as part of the expected evolution.

PRIME (PoweRline Intelligent Metering Evolution) is basically a physical and medium access control layer definition based on common, modern mechanisms and technologies, in order to guarantee that a future proof system may be designed and built.

From a physical layer perspective, PRIME is base on Orthogonal Frequency Division Multiplexing (OFDM) in CENELEC-A band, reaching up to 130 kbps raw data rate. The natural choice of CENELEC-A band was evident, as in Europe this is already a normalised frequency range for PLC, which use “shall be restricted to electricity operators and their licensees”. It is defined in European Standard EN50065-1 and spans from 3 kHz to 95 kHz. In the US, the FCC Part 15 allows the use of up to 490 kHz, so PRIME would also be compatible with this.

OFDM transmits a total of 96 data sub-carriers between 42 kHz and 89 kHz, adaptively using one of three differential digital modulation schemes (BPSK, QPSK, 8PSK) with or without convolutional coding. Lower parts of CENELEC-A band are unused due to their inherent unreliability and noise levels. Frequency domain differential PSK modulation was shown to be superior while allowing for low cost transceivers, and around one-third of measured cases correctly demodulated 8PSK, so it was decided to include non-binary schemes

ARCHITECTURE OF THE SYSTEM

Many remote metering systems do exist in a more or less proprietary fashion. With the advent of DLMS/COSEM applications, from an intuitive perspective and among many possible alternatives for communications, a clear need was felt for an open, non proprietary, royalty and patent free PLC communications solution that could fit a telecommunication layered architecture.

OVERVIEW OF THE MAC LAYER

PRIME MAC layer wants to take the most out of the physical layer below; while at the same time tries neither to impose any restriction on it nor to adjust solely to its specific details. MAC layer inherits features of meshed systems (such as WiMAX and ZigBee), while at the same time taking into consideration that the available bandwidth will be limited. Simplicity, low cost and flexibility are the main goals of the design.

PRIME MAC specification has been provided with different characteristics to fulfil the objectives:

From a system perspective, PRIME adapts well to the topology of electric grid. A PRIME system is composed of sub-networks, which are defined within the context of a transformer station and its meters (similar to GSM systems, different Base Nodes with coverage areas initially restricted to its low voltage served customers). A sub-network comprises a “tree” with two types of nodes, a Base Node and multiple Services Nodes. 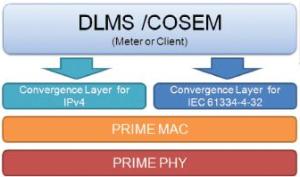 Service Nodes may become either Terminal Nodes or Switching Nodes; conceptually, both apparently different devices are, in fact, states of a same electronic device.

The mechanism implemented in PRIME is a consequence of the need to have nodes in the system that could assist the Base Node in reaching more distant parts of the network. A node which cannot directly communicate with the Base Node just with physical layer resources due to noise or interference constraints (power, modulation scheme, etc), could manage to get its signal to be “switched” by a Switch Node so configured. Terminal Nodes, speaking of real devices, are basic meters that have to connect to the Base Node; Switch Nodes are plain meters (Terminal Nodes), acting also as switches.

One of the most interesting features of this Service Node duality is that it allows the network to be dynamically reconfigured whenever there is a situation that requires a certain node to help any other one to progress its data up to the Base Node. It is through control messages that the different nodes configure themselves as needed to set the whole network.

Figure 3- Example of sub-networ "tree"
Figure 3 is an example of this. The different nodes in the figure include a simplified addressing scheme in which each node has two numbers, and some of them two groups of numbers. The basic idea is that Service Nodes in “switch” state have two pairs of numbers (one address as Terminal Node -T-, and another one as Switch Node -S-). Terminal Nodes exhibit only one pair of numbers, where the first one identifies the relationship to its Switch Node (the one helping him to reach the Base Node), and the other one is the sequential number of the different Terminal Nodes “under” that Switch Node.

The addressing shown is a simplification of the more general one that operates in the system. This specific addressing scheme identifies sub-networks and different types of nodes, manages connections, and performs multicast and broadcast.

BASE NODE AS THE ORGANISER

MAC layer is defined for a connection oriented master/slave configuration. Connections are needed for communication of nodes in the system. The Base Node is the node in the system which controls the situation inside its sub-network and is also in charge of organising the frame structure.

PRIME devices will work in a shared media, and will use a channel access scheme based on CSMA/CA (carrier sense multiple access with collision avoidance) scheduled along with Time Division Multiplexing as depicted in the figure above.

Time is divided into fixed size frames, and transmission of a beacon (Bc) by a Base Node identifies the start of a frame. There are some beacon slots reserved for Base Node and Switch Nodes transmission (periodicity is flexible), and the rest is shared dynamically between a slot for shared medium access (SCP, Shared Contention Period) and another one for collision free transmissions (CFP, Contention Free Period). The frame has a fixed duration, and the SCP has a minimum duration of 64 OFDM symbols time.

Information in MAC layer is structured in Packet Data Units (PDUs). There are three different types of PDUs: one of them is generic (Generic PDU), used for nearly every transmission, and the other two PDUs are related to specific messages, ie beacon transmissions (Beacon PDU, used by Base Node and Switches to announce the sub-network and its parameters -security profile, identification of the sub-network and the device generating beacon, Sub-network Address (SNA) of this sub-network, and details of frame structure to be followed for the duration of frame that starts with this beacon) and searching for help to reach the Base Node (Promotion Need PDU, used when no beacon is received).

Generic MAC PDUs (GPDU), which hold most of the sub-network traffic, can convey data and control information. The GPDU is composed of the Generic MAC header, one or more MAC packets (depending if concatenation of packets – ‘packet aggregation’ – is allowed in a certain Switch Node) and the calculated CRC.

Generic MAC header contains information which is applicable to all packets contained in a single burst, basically the direction of the transmission (communication between Service Node and Base Node –uplink- or from Base Node to Service Node –downlink-), level of originating device in overall network hierarchy and 8 bits of header check sequence.

Inside the Packet Structure, we find the various packets, each one containing a header and payload. Inside this structure, packet header contains specific information on source/destination of the packet, its nature (control information or data), transmission priority of contents (QoS), length of payload and sequencing information used for acknowledgements of control packets. The three bytes in Generic MAC Header and the first four bytes of the first Packet header should be mapped in the MAC Header of PHY PDU. 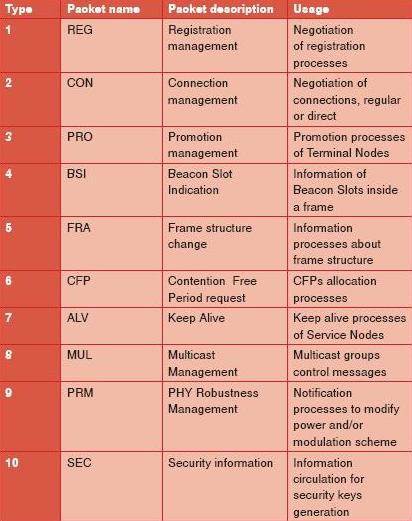 The powerline channel at PHY operational frequencies can experience impulsive noise. While the duration of this noise is very short, it is bound to cause problems for any data on the channel. For this and other causes, to enable better application layer efficiency, an optional retransmission scheme is specified within the MAC. Intermediate Switch Nodes that do not implement ARQ are required to transparently bridge traffic. The specified ARQ mechanism is that of “Selective Repeat”.

The security functionality provides privacy, authentication and data integrity to the MAC layer through a secure connection method and a key management policy. While devices may choose not to encrypt data traffic, it is mandatory for all MAC control messages to be encrypted with a specific security profile. Additionally, the Beacon PDU and Promotion Needed PDU are also transmitted nonencrypted.

-Authentication is guaranteed by the fact that each node has its own secret key known only by the node itself and the Base Node.

-Data integrity is guaranteed by the fact that the payload CRC is encrypted.

Convergence Layer (CL) opens MAC and PHY layers to upper layers and applications. CL classifies traffic associating it with its proper MAC connection. This layer performs the mapping of any kind of traffic into MAC SDUs, providing access to the core MAC functionalities. It may also include payload header suppression functions. PRIME convergence layer is separated into two sublayers:

At the moment, two convergence layers are defined in PRIME in order to accommodate different kinds of traffic into MAC SDUs, namely, IP convergence layer as a very useful and universal access to PRIME, and IEC 61334-4-32 as a simple link towards metering systems.

Currently there is only one such service. It is the Segmentation and Reassembly (SAR). The SAR segments convergence layer SDUs that are larger than a specific size into fixed size segments. The segmented data is reassembled at the destination SAR before being forwarded to applications. PRIME specifies a uniform segment size for all convergence layers, thus making it possible to have low complexity implementations.

IPv4 convergence layer provides an efficient method of transferring IPv4 packets over PRIME networks. Thus, a Service Node can pass IPv4 packets to either the Base Node, or to other Service Nodes.

In this SSCS, a Service Node can only exchange data with the Base Node and not to other Service Nodes:

PRIME system is progressing quickly. PHY layer takes the most out of the low voltage electric lines. MAC layer manages to solve difficult situations in which noise, interference or attenuation might hamper PHY performance. CL provides an easy connection of PRIME to existing systems and applications.