The demand for smart meters in Germany is still low, despite the requirement for the installation of "intelligent" measuring equipment since January 2010 in new buildings, reconstructions or on customer request. According to the survey participants of trend:research’s latest study significant market barriers are the lack of legal requirements and as a result, uncertainties relating to the technologies and standardization as well as a lack of consumer interest.

Three quarters of the polled energy suppliers said they offer smart meters primarily because of the legal requirements. The situation could be changed by offering additional products and services that are based on smart metering. For the majority of the surveyed utilities that provide smart meters, smart home applications have the high-est potential. Based on the current conditions trend:research forecasts an accumulated market volume for smart metering hardware in all branches of around €660 million in the period from 2009 to 2020.

The study "Smart Metering" (3rd Edition) assesses the market potential and volume and identifies barriers and drivers in the smart meter market up to 2020. The status quo in terms of technologies used and the related standardization and also the benefit for the individual market roles (e.g. service providers) is shown. In addition, an evaluation of the cost and revenue situation of conventional infrastructure and smart metering systems is given.

trend:research uses a variety of field and desk research methods. In addition to extensive intra- and internet database analysis 113 structured interviews with market experts from utilities, technology and software manufacturers, consultants, and (billing) service providers were conducted in order to underpin the analysis. Through systematic comparisons to the previous studies from 2007 and 2008 the results from more than 160 additional interviews are integrated. Also the results of a representative consumer survey with over 200 participants of the Ludwig-Maximilians-University Munich (LMU) are used in the study. trend:research uses the results with an exclusive focus on the acceptance and motivation of consumers. 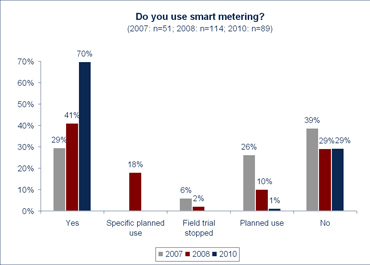 Smart metering is still offered in varying degrees, the majority of respondents indicated, however, the smart meter and services in this field were not considered as "day-to-day business." The majority of the surveyed energy suppliers that do not use smart metering said that the technology was not yet available. 30 percent each indicated that the conditions are unclear or that no customer demand for smart metering has been recorded. Only seven percent named high costs as a reason.

In addition to the higher number of projects a change in quality also has occurred. Some projects are linked with smart home features (e.g. T-Systems with smart metering and home management). But unchanged from previous years is the fact that smart metering is used mainly in the electricity sector. Market for smart metering hardware to 2020
In the study, the development of the market for smart metering and the possible market potential for the various sub-markets, as well as the price for units is forecast in three scenarios up to 2020. By presenting a scenario with extreme conditions, exogenous shocks and their impact on the use and market potential of smart metering are shown illustratively. In the reference scenario a cumulative market volume of around €660 million over the period 2009 to 2020 is projected for smart metering hardware across all divisions. This corresponds to about six million meters in 2020. Nevertheless, even under this scenario, a nationwide deployment that covers 80 percent of the total number of meters in Germany is unlikely.

The future development of existing and new smart metering products in Germany depends mostly on legal requirements. In particular, unresolved technical standards and privacy is-sues as well as the reluctance of consumers complicate the development of long term product and pricing strategies, according to the surveyed experts. For some respondents the initial euphoria for smart metering in the industry is gone. On the other hand there are positive factors that will lead to the development of existing products today, e.g. the increasing com-petition among manufacturers and service providers and also the objective of the EU that by 2020 at least 80 percent of installed measurement systems are “intelligent.” With the development of innovative business models, particularly within "smart homes," the sales potential in smart metering and the consequential services also increases. This could provide a spark in the market for smart metering.