Since the publication of the DLMS/COSEM standards in 2002 (IEC 62056, EN 13757-1) growing global interest confirms that they have met expectations. Market liberalisation and global competition created a complex environment and consequently new needs for meter data collection. Developments in this area provide one of the core technologies enabling new ways of operating the energy market.

Energy providers, focusing on customer satisfaction and striving to optimise the use of their resources, need metering systems that support all energy types, providing more data, more often, from geographically dispersed locations to more commercial partners. Accurate data, on time, securely, and at the lowest possible overall cost is needed.

Enabling technologies, like low-cost A/D converters, microcontrollers, DSPs, high capacity memories and the latest communication methods are driving a revolution started some 30 years ago in a conservative industry, dominated for more than a century by electromechanical meters and manual meter reading. The need for more accuracy and more data is met by intelligent, communicating meters, spreading from large consumption applications to the lower, residential segments. Collection of the huge amount of data generated must be based on efficient solutions, so cost of system integration and maintenance becomes a key aspect.

The first data collection systems were inevitably based on proprietary solutions. Utilities, working in a stable environment, were ready to partner with a single or a few vendors and were able to dedicate resources to operate such systems.

The need for standardisation had been identified early, and IEC 61107 was published in 1992. It defined how to log on to the meter and retrieve data, but did not say anything about how to find, identify, format and interpret it. For each meter type and data collection system, device drivers – based on manufacturer-specific information – had to be developed. Maintenance is increasingly difficult in today’s environment of global expansion, mergers and takeovers, which has led to a meter park made up of equipment from various manufacturers and the need to consolidate data collection systems.

Leading manufacturers and utilities – grouped in the DLMS UA – took a new approach. It builds on the principles and some elements of the latest standards for power system control, developed by IEC TC 57. The telecontrol industry was one of the first to realise that system integration of intelligent electronic devices requires a new architecture modelling the process by interface objects, and separating the model from the communication protocol. While the process model is relatively stable, communication technologies are changing fast. Splitting the models from protocols separates two problem domains, allowing them to develop at their own speed and increasing flexibility.

DLMS/COSEM was conceived to bring interoperability into meter data exchange. This has been achieved by developing an interface object model, common for all energy types, specifying the identification, formatting and interpretation of all data. The model is separated from the protocol, to allow the use of any media.

Protocol suites for various communication profiles, based on international standards, have been developed. Standard extension rules, self-descriptive features, and the ability to negotiate features and contexts render the specification future-proof and allow the development of a generic data collection system which can connect to the meter, reveal its data structure, and collect data. DLMS/COSEM also provides advanced security features and selective access to data, which was not available before. A conformance certification scheme is available to verify implementations.

The COSEM (Companion Specification for Energy Metering) object model described in the Blue Book defines interface classes close to the metering domain, like registers, profiles, clocks and schedules. An interface class definition describes the attributes with the usable data types, as well as methods allowing the modification of the attributes. Objects may interact with each other to perform functions like tarification, end of billing period, and handling of special events, like clock setting and power failures, is also defined. 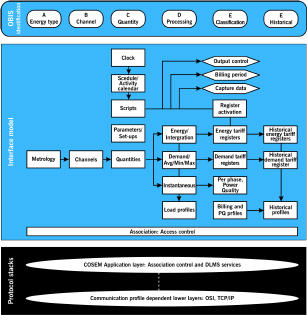 The functionality of the meter is modelled by creating the necessary number of the appropriate objects, identified and referenced by their logical name attributes as defined in the OBIS (Object Identification System) standard. Functionality can be freely organised to several logical devices within a physical device, or spread across several physical devices. COSEM does not standardise and does not limit the functionality of the meter. The model supports a wide range of functions and new ones are continuously added. This year, for example, a range of objects modelling advanced power quality and loss compensation features have been defined.

The DLMS-based protocols transport the data represented by attributes and methods of the objects. Access to these is the task of the COSEM application layer, the top layer in any protocol stack. Data exchange is based on the client/server paradigm: the data collection system requests services and the meter provides them. In addition, the meter can initiate reporting events.

The DLMS services are common to all interface classes, allowing new classes to be defined without affecting the protocol. A special association object controls authentication and provides a view of the functionality of the meter, the objects, their attributes and available methods for a given client. Several associations can be defined, providing access to the various parties according to their access rights. All data is clearly structured using ASN.1 and efficiently encoded using A-XDR. Protocol overheads can be reduced by structuring data in profiles and transporting it in single requests/responses.

Lower layers of the protocol are selected according to the communication media. For PSTN and GSM networks, a 3-layer OSI-based protocol stack is defined. The HDLC based data link layer ensures the integrity of data transport and provides segmentation for long messages, like readout and load profiles. The physical layer supports the optical port, serial ports and PSTN or GSM modems.

This year a new profile allowing meter data exchange via the Internet has been added, opening the way for DLMS/COSEM to co-exist with a range of Internet applications like file transfer and mail service. The COSEM application layer is supported by TCP/UDP encapsulated in a simple wrapper. Below the IP layer, any data link layer and physical layer can be used.

Interoperability is defined as the ability to exchange data between any meter and any data collection system having compatible capabilities. DLMS/COSEM comes complete with a conformance-testing scheme. Although it cannot guarantee interoperability, it is an important tool to verify the correctness of implementations. To date, 13 meter types have been certified.

Migration is an important issue, given the large number of existing meters and systems. For this purpose, most meters continue to offer IEC 62056-21 Mode C in parallel with the DLMS/COSEM mode, although functionality compared to the full DLMS/COSEM may be reduced. In addition, protocol converters are available.

Both purchasers and vendors benefit from using DLMS/COSEM, an open, global standard. Purchasers enjoy lower system integration and maintenance costs, a consolidated approach to meter functionality, and enhanced control and security to access meter data. Vendors can compete on the application and price/performance ratio instead of on technical details. The DLMS UA provides a platform to share and enrich experience.