It has often been claimed that the comprehensive implementation of AMR facilitates a level playing field within liberalised markets, thereby enhancing customer switching and competitive pressures. In fact recent evidence would support these claims to some extent. Equal access to customer data has undoubtedly been shown to be a prerequisite for market entry. However, the extent of the impact of AMR on customer activity within liberalised markets appears at best limited.

It is sometimes argued that AMR can speed up the services provided by the network operator in connection with supplier switching, as the metering data is immediately available. AMR can also enable customers to switch supplier at any time, without the need for any reliance on (relatively unreliable) self-readings or consumption estimations. However, within the context of a protracted switching-related process (including search and decision-making processes) any time savings achieved through more rapid meter reading or meter reading approval derived from AMR, whilst advantageous, can arguably be seen as relatively insignificant from the customer’s perspective. In fact, the importance of speed is denied, for instance by the fact that the typical switching process in the Netherlands is currently up to three or four times faster than Europe’s most active electricity market in terms of levels of customer switching.

Even where delays in the switching process do occur, metering-related delays are just one of many possible causes. Other causes include large numbers of switch requests that are not accepted first time, often because of valid existing contracts or because of other procedural delays. Business processes imperfection within energy companies may furthermore also be at fault, according to business process experts.

AMR AS A DETERMINANT WITHIN GLOBAL CUSTOMER SWITCHING TRENDS

A recent European Regulators’ Group for Electricity and Gas (ERGEG) best practice report (ERGEG, 2006) proposes a single definition for use in the collection of switching data. This definition and method has been used, wherever possible, in a recent two-year long project conducted by VaasaEMG and the US-based Peace Software in co-operation with more than 50 other experts and organisations around the world (see www.peace.com/customer-switching for more information).

According to the VaasaEmg/Peace research, by far the most active energy markets (termed ‘Hot’ markets) in the world are those in Great Britain and the state of Victoria, Australia. Other active markets include the Norwegian, Swedish and Netherlands electricity markets. By observing individual market switching trends and similarities between the trends in different markets, and by then investigating the explanations for those trends, much can be learnt about the way markets behave in practice and the role of AMR in customer switching. In particular it is of value to look at the experiences of some of the more active markets as identified by the 2005 VaasaEMG/Peace rankings.

Since May 1999, when both Great Britain’s gas and electricity markets were fully open to competition, the market has consistently been at the forefront of utility customer switching rates. In 2005, the trend was towards a steady increase in switching from the end of 2003, which can be attributed to energy retail price rises and resulting media response, and to energywatch-led media campaigns. (energywatch is the independent gas and energy watchdog). 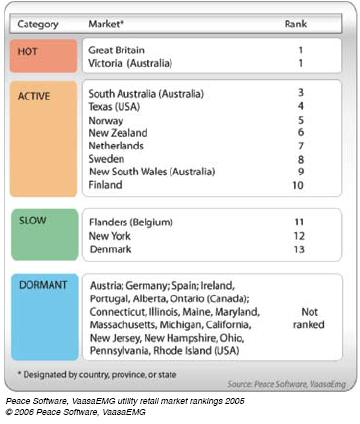 In general the high levels of switching in Great Britain are attributed to factors such as aggressive and effective direct marketing strategies and methods, sustained marketing commitment from retail competitors, effective unbundling, price rises, dual-fuel offerings, customer awareness and customer experience of energy (electricity and gas) switching. Although metering data and billing is generally thought of as being of relatively poor quality in the British market, there is no widespread AMR in the UK, especially not in the residential market. This leads experts to be sceptical about whether it would have any impact on the level of customer activity or switching.

Two of the three hottest customer switching markets in the world are found in Australia, where liberalisation differs state by state (three states are so far fully liberalised). Whilst AMR is mandated and becoming relatively widely applied in Victoria, improving the efficiency of switching processes, it is too soon to tell if it will have any effect on the level of customer switching, which has already been high for some time. Victoria, with Melbourne its largest city, has witnessed accelerated customer switching since the end of 2003, with the number of customers switching almost tripling between then and the end of 2005. Some of the principal reasons behind this acceleration include incumbent utilities launching targeted lifestyle products and ramping up sales and marketing activities, incumbents from other states successfully entering the Victorian market, short term price offers, good customer awareness levels, efficient search tools for consumers, and a healthy number of new entrants initiating selling campaigns in pursuit of critical-mass market share.

In 2004-2005 South Australia’s gas and electricity markets exhibited a dramatic increase in customer switching, pushing this state from being a new market with limited customer switching to one of the hottest energy retail markets in the world. Some of the foremost factors contributing to this striking increase in retail market activity include the divestment of the retail customer base by the state government, switching credits granted to a portion of the customer base, and price increases which led consumers to evaluate their retail energy supply options.

SWITCHING IN THE NORDIC COUNTRIES

The Nordic market has some of the longest fully liberalised electricity markets in the world. With the exceptions of Denmark and Finland, the Nordic market is furthermore one of the most active markets in the world, with around 10% of customers switching per year in recent years. This is less than in Great Britain or the aforementioned Australian markets, but significant nevertheless. One interesting characteristic concerning the Nordic electricity market is the clear impact which seasonality has on the level of switching. Price hikes, an absence of major switching-process barriers, media support and the availability of good switching information and comparison web services has assisted the Nordic region’s higher switching levels.

However, AMR has not yet had an impact on customer switching in the Nordic region. The main factors considered to inhibit switching include customer awareness, comparability of offers/tariffs, and the limited marketing efforts of competing retailers. Furthermore, at a recent Nordic Regulators’ seminar the key reasons for big differences in switching levels between the Nordic markets were identified as differences in bill predictability, customer awareness, relative savings, marketing activity, market momentum and multiple bills. AMR and related issues were not seen as a major issue relating to customer switching levels.

New Zealand is one of the only markets in the world where billing or metering failures have directly shown up on national customer switching trend figures (some evidence also exists in the UK). New Zealand has a well established and fully liberalised market, with active levels of market competition. Due to various factors, the country temporarily became the most active switching market in the world in 2001 (even more active than Great Britain) due to severe billing problems resulting from the customer profiling/estimation failures of a major incumbent player in the market.

Occasional metering or billing weaknesses may therefore be seen as an encouragement to customer switching. Today New Zealand does not have extensive AMR deployment – whilst some areas do – and AMR can be seen as responsible for solving some problems (at a relatively high cost). There is, however, no evidence that AMR increases switching. If anything AMR may have slightly reduced switching through increasing customers’ satisfaction with their present company.

SWITCHING IN THE NETHERLANDS AND BELGIUM

The Netherlands and Belgium (Flanders) are considered moderately active markets. Here the limitations on customer switching are similar to other parts of the world, including insufficient involvement/awareness,
marketing weaknesses and incumbent advantages relating to customer inertia. It would be rather unrealistic to assume that AMR-related improvement in switching processes would have a major effect on the levels of switching in the Netherlands.

Sweden, Victoria and Texas are the only active fully liberalised markets which are in the process of adopting largescale AMR. Their switching levels were, however, achieved before or in isolation to the development of AMR, and the rollout of AMR cannot be said to have contributed to the switching levels in these countries. Furthermore, the market with the world’s highest level of switching, Great Britain, does not have large-scale AMR. There are many apparent or known explanations for low or inhibited switching levels. The absence of AMR is not amongst the more significant of these.