Discussion about electronic type meters got a new huge impulse in Europe after the decision of the Italian state-owned electricity supplier ENEL in 2001 to replace all installed motor meters newly manufactured electronic type meters constructed especially for ENEL. Those meters showed all these functionalities that are considered today typical for smart meters: Remote reading and remote disconnect features, programmable tariff functions, time switch, interval measurement and other useful functions. The Italian project was also the first one in Europe that systematically switched from the meter view to a system view and which intended to show the advantages of completely automated metering management processes. Beside those pioneer projects two other effects influenced the renaissance of activities regarding introduction of electronic type meters into households. The first one was a technical reason. It was the availability of increasingly cheaper communication media like Internet and GPRS. These technologies made the remote reading in respect to costs much more attractive.

The second reason was more important. It was the liberalisation of the electricity markets in Europe enforced by the Directives 96/92/ EC concerning common rules for the internal market in electricity and 2003/54/EC concerning common rules for the internal market in electricity and repealing Directive 96/92/EC issued by the European Commission. Such European Directives instruct the governments of the member states of the European Community to implement the content of the Directives into their national laws. In case of those directives it meant that the member states should privatise the electric power supply economy. Energy supply companies should be divided into generation companies, grid companies, metering companies and other kinds of particle business. The idea was that all these players should act independently from each other in a European harmonised landscape of competition. For consumers in every single member state should exist the possibility to buy electricity from every generation company which exists within Europe. And all generation companies should get the opportunity to use grids from other companies for the delivery of their energy to all places in Europe. All experts knew: It would not be possible to put such a single market for electricity into practice without having more sophisticated electricity meters. But there appeared a big problem: The market seemed not to be interested in joining in the game. Nor did private consumers show an urgent desire to skip from one electricity supplier to another. The financial advantages of participating in the market actions was too small in comparison with the necessary effort and time expense. Just an example from Germany: Yearly mean consumption of a 4-personhousehold was about 3500 kWh or €700. Maybe that “electricity supplier hopping” enabled persons to save no more than about €70 per year in the best case. €70 for the additional time searching for the best prices and the feeling of uncertainty because of saying good bye to the good old “home electricity supplier”. No – saving money was not a sufficiently attractive incentive for the economic players to attend.

The crucial kick came from another European Directive with the title “Directive 2006/32 on energy end-use efficiency and energy services and repealing Council Directive 93/76/EEC“. The intention of this directive is to create the legal framework for an European legislation in respect to a sustainable reduction of CO2 emission. Among others the European legislator has identified a lack of sufficiently transparent energy measurement in some European countries as a important source of “Negawatts”. Therefore the Directive requests in Article 13 the implementation of sophisticated meters under certain circumstances. The original text is given in Fig 1. 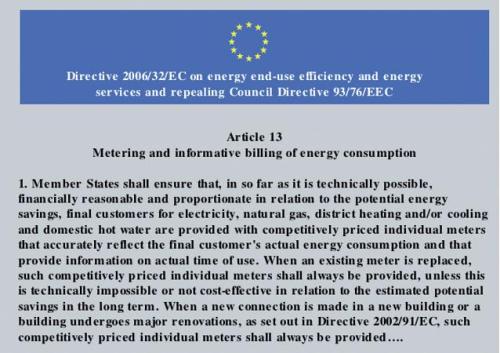 Some countries in Europe started a soft weeding out of the induction meters, expecting the coming directive 2006/32. A well known example is Sweden. Sweden changed its own energy law so that it became mandatory to read meters in the households at least every month. Remote reading was the only economical means to get the billing data and substitution of induction type meters by electronic type meters became attractive in respect to costs. In 2004/2003 the Swedish electricity suppliers started with the first mass rollouts with some hundred thousands of remotely readable electronic type meters. Other countries followed. For instance The Netherlands. They showed that a successful cooperation between manufacturers, electricity suppliers and authorities in charge regarding the development of a standard which ensures interoperability of the different manufacturers’ technical solutions is possible – possible not only for electricity meters but between all kind of utility meters. The result was the national standardisation proposal NTA 8130. Accompanying this, the government of the Netherlands intends to enact a law which requests that all households shall get within a certain time remotely readable electricity meters. However, this law is still under discussion because consumers’ organisations claim concerns against “Big-Brother-Meters” with which it is possible to analyse details of private lives by continual meter readings. Many consumers consider data protection and the right of self-determination as a property with high priority. Therefore the successful introduction of Smart Metering surely means convincing the consumers that their consumption data will not be misused. This is one of the reasons why the legislator in Germany – with about 42 million meters in the household area the biggest meter market in Europe – decided for an approach where the consumers can decide whether they want a remotely read meter or not.

But it is the duty of electricity suppliers to offer such meters (up from the beginning of 2010). The German government call that a “market driven approach”. Naturally this does not accelerate the introduction of smart meters like legal imperative requests do. And it leads to the growth of a coloured landscape of proprietary solutions for communication solutions. Another important smart metering activity has been initiated by the Spanish electricity supplier IBERDROLA. It is the Open Meter Project. Funded by the European Commission 19 participants from industry, research, policy makers and users started in January 2009 under the leadership of IBERDROLA and KEMA to develop open interoperability standards till 2011.

One of the participants is the year-old European Smart Metering Industry Group ESMIG. ESMIG is a partner organisation of CENELEC, the European mirror organisation to IEC. It seems that ESMIG activities have been one of the crucial reasons which motivated the European Commission to get proactively busy in the field of smart metering. The European Commission prepared at the end of 2008 and issued in the beginning of 2009 a so-called standardisation mandate to the European Standardisation Organisation. This “ESO” is an informal union of CEN (represents gas-, heat- and water meters), CENELEC (represents electricity meters) and ETSI (represents communication technologies). What does such a mandate mean? A mandate is a legislative tool with which the European Commission can intervene if the market forces fail in leading to coordinated industrial standardisation work in order to support the emergence of a European single market. If the standardisation bodies to which the Commission addresses such a mandate do not accept it the alternatives are European legislation activities – a regularly not very popular solution on the side of the industry. Therefore it is no surprise that all three ESO members have accepted the mandate. An operational consequence was the establishment of the Smart Metering Coordination Group SMCG at the beginning of 2009. This group held its first ordinary meeting in May 2009. It was decided to establish two sub-groups, the Ad-Hoc Group “Communication” and the Ad-Hoc Group “Additional funcitionalities”.

Neither of the groups will create new standards but will rather mainly analyse and map the existing national standardisation works and similar activities of the single states. The groups wiill then delegate operational standardisation work to the official existing committees of the ESOs. All experts involved know that it is not possible to undo all the existing smart metering standardisation activities in Europe. The only imaginable solution will probably be a standard that is something like a “house” in which all the already existing techniques can find a home and live peacefully together. All concerned branches of the metering business are eager to know the result which will be offered by the SM-CG to the European Commission. It expects something regarding “Communication” in April 2010 and regarding “Additional Functionalities” at the beginning of 2012. To give additional hope to the standardisation organisations that their efforts will be rewarded, the European Commission at end of June 2009 has adopted an improved version of the Directive 2003/54/ EC concerning common rules for the internal market in electricity and repealing Directive 96/92/EC. To understand what is going on it is better to cite the crucial text from the new coming Directive. The original text is given in Fig. 2. 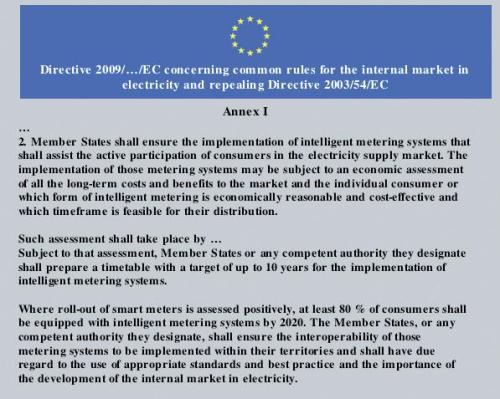 It is hard to forecast how fast this politically driven revolution will bring the death of induction meters in Europe. The big European manufacturers like AEM, Iskra, Itron, L+G and Pafal are still producing them and electricity suppliers are still ordering them.