After years of careful deliberation and assessment it looks as though smart meters are now on the way. This is to be welcomed as it could herald a transformation in people’s relationship with their energy and empower them to make informed decisions on how and when they use energy in the home.

Energy will no longer be the invisible resource too often taken for granted with little if any understanding of what it takes to run appliances or heat hot water. International experience suggests energy savings of 5-15% are possible, which is even greater than what is currently assumed in government assessments of benefits.

But there remain many uncertainties ahead of us: Will the projected benefits from smart metering materialise? What level of energy and carbon saving will the rollout ultimately deliver? How will smart metering be received? Will consumers embrace smart metering? Could some consumers refuse to cooperate in the installation process?

The UK government has committed to ensuring that all smart meters are accompanied by stand alone energy displays. This will help ensure all consumers are able to easily access the all important real time feedback on consumption which is so key to informing behaviour. For many, the display device is likely to be the most immediately obvious and tangible benefit from the rollout. Other feedback options such as on-line services and new mobile phone applications will be able to supplement these displays, and are likely to be highly attractive propositions for certain consumer segments.

Over the last few years mixed anecdotal feedback has been received from consumers with experience of using first generation “clip on” electricity displays. While some have experienced dramatic epiphanies over their energy use and gone about changing their household habits and telling family and friends of the benefits of such displays, others have been less impressed, often complaining that they do not understand the information being given. This can confuse and frustrate and potentially entirely put people off engaging further with their energy usage, which is clearly the opposite of what is needed from the rollout of smart meters.

There is a multitude of ways in which to present information on energy usage. The units of measurement could be power (in watts), spend (in pounds) or resulting CO2 emissions. Equally, this information could be expressed as a cumulative amount or as a rate of use, for each hour, each day, over a week or longer. All of this information could then be presented in a number of different ways: in text, numerically, graphically, through movement or change in colour. However, there is precious little evidence over what is in fact the best, most effective way of conveying such data.

With these thoughts in mind the Energy Saving Trust undertook a study last summer to better understand what information is needed and in what format it should be displayed to be most useful to consumers.

Each group met twice. At the first meeting the groups collectively designed a real time energy feedback display. At the end of the first meeting, participants were given a real time home energy display to take home and use. Each member of a group received a different display. Participants were also given a diary which they were asked to complete and bring back to the followup group. The devices used are shown in Figure 1.

The second meeting was held 8 days later. Participants described their experiences of using their display and were encouraged to discuss the strengths and weaknesses of each of the seven different display designs. They then reviewed their initial designs and prepared new ones.

FINDINGS
The practical experience of using displays, and the focus group process, teased out differences between what people initially thought they would like on a display and what they actually ended up wanting. The experience therefore helped to clarify what was genuinely informative and useful and what was superfluous.

From analysing the designs put forward by the different groups it is possible to identify the key information and features which participants found most useful (see Figure 2). No two final designs from all five groups were identical. Each group added its own unique features and subtle preferences. However, the outputs from the exercise demonstrate a remarkable degree of convergence across the different groups. 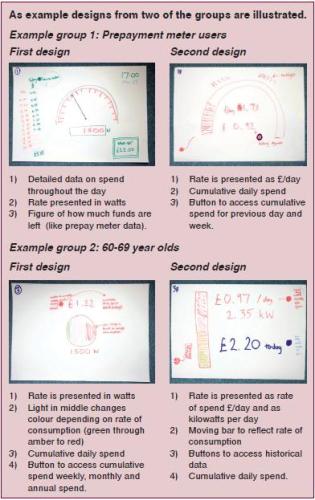 THE POWER OF VISUAL DISPLAYS
It is notable in example group 2 that the visual display changes from a light with varying colour in design 1, to a moving bar in design 2 (similar to the design produced by example group 1). This preference was also found amongst the other three groups. One group that initially favoured just a digital display abandoned it in favour of a similar moving “speedometer” design.

Although the groups valued the accuracy provided by digital figures, every one of the final designs included a graphic indicator of the current rate of electricity consumption. Participants found that moving visual displays allowed them to get an immediate impression of current rate and allow relative scales of change in consumption to be shown quickly without the need for calculations. A moving display can also help catch the eye.

Presentation of rate
All five groups wanted to see real time rate of consumption but they struggled in deciding how this should be presented. Both example groups began by presenting rate of consumption in watts. Both groups initially considered expressing rate (especially in financial terms) to be too difficult as it had the potential to confuse or mislead.

However, by the second design stage both groups opted for a rate of spend in pounds per day, which they considered to be perfectly understandable. This trend was also visible in the other three groups. Although it was recognised that watts reflected rate and the meaning of this was understood in relative terms, watts were very poorly understood. Far more meaningful was use of pounds per day which was understood once participants had direct experience of using, or viewing, a display with this functionality. Most groups also wanted to be able to see rate expressed in watts or kilowatts per day, either on the same screen or through pressing a button.

Overall spend
Without exception all five groups decided they wanted cumulative daily spend presented. This, combined with information on current rate of spend, was typically considered sufficient to enable users to track consumption and pinpoint areas of high usage in their home. This was even the case for the prepayment users in example group 1, who initially had wanted a detailed breakdown of costs hour by hour throughout the day to help them identify high cost activities.

Historic data
All final designs included the ability to access historical data on spend and to compare it to current levels. Although not placed on the main default screen, this information could be accessed through further investigation by pressing a button.

Simplicity
There was a strong desire to keep the display screen simple. This was the single most common recommendation made by participants, especially the older members of example group 2. In all groups there was a tension between keeping it simple and satisfying multiple needs.

While the final design utilised buttons to be able to switch units or to access historical information, the more “technophobe” users are unlikely to want to physically interact with their display to access different data.

It was striking how strongly these findings were supported by a literature review that was undertaken on the theory of display design, which drew heavily from the field of cockpit design and avionics.

RECOMMENDATIONS
The next decade will see many new display devices developed and millions of displays procured by suppliers. By 2020 energy displays will be a standard feature of every home. It is vital that the consumer perspective is considered through undertaking thorough consumer testing and market research. To date, too little attention has been given to this by energy display developers and manufacturers. Despite a relatively well developed in-home electricity display industry in the UK, the majority of displays currently on the market do not exhibit the functionality and features that consumers in practice identify as most useful.

Based on the findings, recommendations were set out in the project report for what information displays should hold, in order to be most useful for consumers. The UK Department of Energy and Climate Change (DECC) are now exploring the minimum functionality that will be required of displays for smart meter rollout. The Energy Saving Trust supports this as we believe this will give greater confidence that displays, and the rollout of smart meters overall, will deliver for consumers and for the environment.

Beyond these basic standards, further innovations offer exciting opportunities. Integration of energy displays with heating controls and the development of “home hub” technologies offer the potential to give significantly more control to consumers. Equally, the introduction of intelligent automated appliance control can potentially save energy while reducing the need for consumer behavioural responses. Principles of good design and usability must remain central to these developments to ensure they deliver for consumers. Independent testing of such products is also likely to be useful in order to improve consumer confidence and build demand.

The full research report “The Smart Way to Display” and summary document is available on www.energysavingtrust.org.uk/smart_meters