After the 2002/03 winter with high prices caused by low precipitation, the Norwegian Ministry of Petroleum and Energy issued a White Paper on the security of supply. Improved end user contracts and efficient use of Automatic Meter Reading (AMR) and remote load control (RLC) were among the various measures to mitigate a tight future energy situation.

Active market participation from the demand side will lead to load reduction in periods of shortage, which will reduce the need for investment in new production and/or transmission capacity. Since the Nordic power market is settled on an hourly basis, hourly metering of a major share of the load is needed.

Norwegian regulations require hourly metering of all customers with a yearly consumption above 100,000 kWh. About 4 percent of the 2.5 million metering points are covered with AMR. In June 2007 the Norwegian authorities gave a recommendation for AMR to all customers in Norway by 2013.

However, hourly metering of consumption is not enough. The vital point is to provide the consumer with economic incentives that reflect the actual market situation. It is also important that the expected load reduction based on price is included in the market bids in order to avoid unexpected costs for the market players. 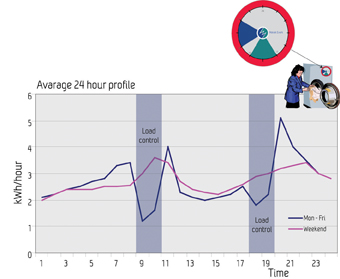 RESEARCH PROJECT
This is the background for the Market Based Demand Response project, which is running from 2005-2008. The objective of the project is to increase the efficiency of the power market by stimulating increased demand response.

The project is organised in two main work packages: Increased demand side price elasticity (WP1) and Improvement of technology (WP2). The project builds on knowledge from previous projects testing different AMR systems and the load curve impact on price signals. The project is being performed at SINTEF Energy Research, with the Norwegian Transmission System Operator (Statnett) as responsible partner on behalf of the Research Council of Norway. Other participants involved in the project are the Norwegian Electricity Industry Association (EBL), Statsbygg (The Directorate of Public Construction and Property), distribution system operators (DSOs), power suppliers/retailers and vendors of AMR technology.

WP1: INCREASED DEMAND SIDE PRICE ELASTICITY
In the Nordic deregulated power system all customers have separate tariffs for the energy and the use of the network. The energy part is based on a contract between the supplier/ retailer and the customer. This contract can have a fixed price for a defined period or a spot related price. The design of the network tariff can vary within the framework defined by the authorities as a part of the monopoly regulations.

The WP1 package includes several pilot tests involving the different partners in the project. The main objectives of the tests are to explore the customer acceptance and the load curve impacts on hourly based tariffs and automatic load control schemes. The pilots are focusing both on residential and commercial customers.

Pilot 1: Remote controlled load shifting
In this pilot 40 residential households had hourly metering of their consumption; they were advised to buy energy with an hourly spot price contract, they got a time-of-day (TOD) network tariff which stimulated to load shifting, and RLC was offered as an aid to reduce load and costs in the peak hours.

A TOD tariff was included in the pilot, because this tariff was considered as the best price signal that would give small customers benefit from changes in their consumption pattern for electricity. A tariff with predefined peak periods will train the customers to reduce their consumption in periods when shortage of power is expected.

The chosen times for the energy peak payment were based on the hours during the morning and afternoon when the peak load for the DSO occurred. These hours coincided with the periods when high spot prices were expected and when the peak load occurs on a national level.

The TOD tariff consisted of traditional components such as firm and loss payment. Additionally, a new component concerning energy peak payment was included. This new component was only active from 8:00 to 10:00 in the morning and from 17:00 to 19:00 in the afternoon on work days and it was calculated in a way that ensured that the costs for an average user without demand response were unchanged on a yearly basis. A responsive customer, reducing his load in the predefined hours, would benefit from the tariff, while customers doing nothing would have the same network costs over the year. Additionally, the responsive customer would benefit from high spot prices that normally appear in the same hours in case of energy shortage.

The customers in the pilot were also equipped with a small watch-like magnetic token, the El-button, to place on the dishwasher, washing machine etc. to remind them to avoid usage of these energy consuming appliances in the peak hours.

The RLC in pilot 1 resulted in shifting of load from peak periods to off-peak periods. The most important socioeconomic result from load shifting is related to the possibility for lower prices. In Figure 2 the spot prices for the price area in Mid- Norway are presented for a week in February 2007. The high spot prices are a result of bottlenecks within the Nordic power system. The figure shows a strong relation between the Elspot prices in Mid-Norway and the hours for RLC within pilot 1. If this RLC scheme had been implemented on a large scale and included in the Elspot bid, the price peaks could have been lowered.

Pilot 2: Fixed price contract with return option
A contract that transfers the spot price directly to the customer is considered as the best solution with regard to reflecting the current power situation. About 35 percent of Norwegian households have this kind of contract. The others have some variant of firm price contracts.

In this pilot a new innovative energy contract called “Fixed price contract with return option” was used. The product was developed by a Norwegian supplier, Trondheim Energy. Results from questionnaires showed that it has been well accepted among customers.

With this contract the customer buys a fixed volume at a firm price (Figure 3). The volume is distributed over the period (normally one year) according to a profile. The fixed volume is a financial contract that is settled with reference to the real volume and the running forward prices at Nord Pool. Deviation from the volume leads to sale or additional purchase referred to the current price in the Nord Pool Elspot market.

The product is very favourable for the supplier, since the volume and area price risk is transferred to the customers. The benefit for the customers is the profit from reduced consumption in peak load periods. Based on socioeconomic considerations it is a benefit that the customers get the real price in the area where the electricity is delivered, since this gives them economic incentives to reduce consumption equal to the costs for supply of resources.

In areas with limited power capacity, the area price can be much higher than the system price. The power contract will be further developed and the project recommends that the supplier will take over the area risk from the customers, since the supplier is able to reduce his own risk through proper hedging possibilities. 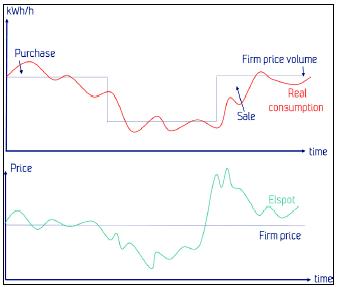 Figure 3 – Example of volume and price distribution
over the period

Pilot 3: Advanced load control in housing cooperative
A cooperative with 24 flats, equipped with a programmable home automation system, was monitored and analysed. The local DSO offered the customers a TOD tariff based on the same principles as in pilot 1. The main aspects of this pilot were to monitor initiatives taken by the residents with regard to the utilisation of the available technology options, thereby achieving cost reductions. The most important functionality used was an “absence button” which turns all electric appliances onto a saving mode when the residents leave the flat.

Pilot 4: Load shifting for commercial customers
For some commercial customers with a yearly consumption larger than 100,000 kWh and hourly metering of their consumption, different loads have been evaluated focusing on the possibility for load shifting and energy conservation. One customer with a building automation system (BAS) installed and using electricity for space and water heating has been participating in the pilot with a new TOD power tariff. This tariff has a component for peak power payment, which implies that only the power in defined peak periods is included in the basis for settlement referred to the network tariff. The customer therefore has the incentive to reduce consumption in peak periods, either by load shifting or energy conservation.

WP2: IMPROVEMENT OF TECHNOLOGY
About 60 percent of the total yearly consumption in Norway (125 TWh) is hourly metered, and the meter data represents a large amount of money. To secure a well functioning power market, formalised requirements concerning the data is very important. Today there is no clear and precise definition concerning the quality of meter data.

The objective of WP2 has been to contribute to an improvement in quality and efficiency in the meter value chain, and to promote technology that makes demand response available. This has included activities such as evaluation of data format with reference to basis functionality and discussing requirements for the availability of meter data. A specification of availability of meter data has been developed within WP2.

Based on the work in WP2 it is recommended that at least 99 percent (average) availability of meter data over a period of 26 weeks for large customers with hourly metering (>100,000 kWh/year) should be obtained.

FURTHER WORK
During the last year of the Market Based Demand Response project, the focus in WP1 will be to summarise the results from the different pilots and focus on demand response and customers attitudes among customers (residential and commercial) located in an area with deficit of power and energy. The Mid-Norway price area will be the focus, because this area will face shortage in the coming years.

The WP2 will focus further on AMR technology and topics such as necessary requirements concerning the prospective rollout of the technology in Norway.

Further information about the project can be found on the website:
www.energy.sintef.no/prosjekt/mabfot/UK