Some energy suppliers, such as Yello Strom, and meter manufacturers, such as Görlitz AG, already offer smart meters on the market. At present, the main market barriers in Germany constitute the high investments in meter systems, proprietary systems, no overlapping practicability and the downstream software, so that the profitability of projects is not yet a given. However, the general conditions are being put in place: increasing market supply, decreasing meter costs and positive developments in foreign countries are leading to increasing attention from suppliers and users.

The main pioneers in the area-wide implementation of smart metering in Europe are Italy and Sweden. In Italy, Enel, the leading Italian power supplier, switched all 30 million meters to smart metering. Sweden was the first country to introduce monthly billing into national law. Because of this, from 2009 all meters in Sweden will have to be equipped with remote readout technology. Suppliers of systems in Germany are benefiting from these experiences in other countries.

Against this background the study “Smart Metering in Germany: Cost and revenue potential within the new metering and measuring” by the trend and market research institute trend:research reviews the developments in the market for smart metering. The basis for this constitutes more than 100 interviews with energy suppliers and meter manufacturers. Added to this are interviews from other trend: research studies on the topics of metering, measurement and billing and other sub-processes, amounting to more than 500 interviews in total. 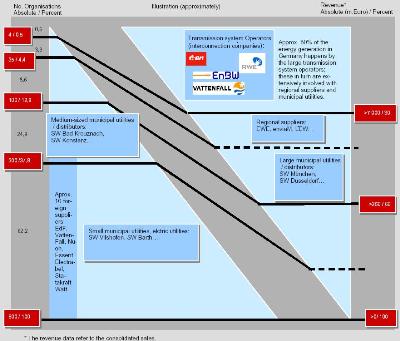 BASICS FOR SMART METERING IN GERMANY
The energy market in Germany is currently composed of approximately 800 suppliers (Figure 1). With the opening of energy markets, oligopolistic structures have developed due to consolidations and acquisitions. The market leaders according to sales are E.ON, RWE, Vattenfall Europe and EnBW. The dominant position of these “large four” is mirrored in their market share of the overall energy supply, amounting to 80 percent of the market. Due to corporate relations as well as their size, a mere 50 to 100 energy suppliers are able to act independently.

To date, competition is proceeding slowly, with most changes of supplier by private customers occurring when moving houses. Sales volumes and total numbers of customers have hardly changed.

While most EU states have had a regulatory authority at their disposal for quite some time, in Germany the national regulatory authority for the energy and gas market was established only recently with the coming into effect of the “Energiewirtschaftsgesetz” (EnWG) in 2005. The regulatory authority is first of all responsible for the regulation and the supervision of the energy market. In particular it decides on the circumstances and methods for network connection and access on the basis of regulations for one or more or all of the grid operators, or on the basis of approbation towards the applicant. This is aimed at increasing the stability of the law for network access and connection and improving transparency, as well as non-discrimination regarding network access.

Since mid-2005, a change in the general conditions is being introduced by the regulatory authority in order to create “functioning” competition. Important in this is the calculation of the grid fees, the incentive regulation and the GPKE, which establishes the basic norms for changing supplier. Another requirement of the Federal Network Agency is the unbundling of the grid from distribution. This offers the chance for smaller organisations to develop their market position. Further tendencies towards liberalisation, e.g. in the metrology, present new options for the positioning of market participants and the further spread of smart meter technology. 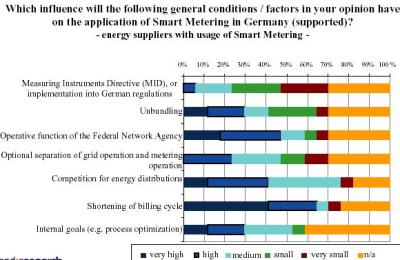 In Germany, the general legal conditions influence the use of smart metering significantly. Suppliers interviewed rated the influence of the Federal Network Agency as very high, because it might – due to future incentive-based regulation – exert an indirect influence on the cost structure of organisations. In particular such influences leading to a shortening of the billing cycle play an important role. Sixty-five percent of energy suppliers using smart metering that were interviewed in the context of the study indicated a high to very high influence due to a cycle shortening (Figure 2). A higher number of billings requires different equipment from the metering operator.

The survey shows furthermore, that the market driver of the legal requirements might actually have a positive effect on metering and therefore also on the smart metering market. This requires a general standardisation, which was criticised as missing by a large fraction of the combination utilities.

In summary, the status quo in Germany can be defined as follows: energy suppliers that were interviewed see a major influence of the general legal conditions on the application of smart metering. Because of the expected liberalisation of the market, the system requirements increase. The current focus is still on pilot projects, which are being conducted in different areas, with a large number of projects with a few meters (<10) up to a larger number (around 1,000). However, to call smart metering a “day-to-day business” would be premature, because the overall penetration – with regard to the number of meters – is only 0.01 percent. Pioneers in Germany include Yello Strom, EnBW, Rheinenergie and the Stadtwerke Schwerte, with the bulk of smart metering units being used in the area of electricity.

THE MARKET FOR SMART METERING IN GERMANY
Not only do the general conditions determine the market for smart metering, but also fundamental market barriers complicate the application of this technology. trend:research’s survey reveals clearly that costs are regarded as a major obstruction to the more progressive development of smart metering. Moreover, 19 percent of the energy suppliers without smart metering specified that the low maturity of the technology constitutes another barrier to its application. These findings show that increased application is being hampered by proprietary systems and the lack of widespread standardisation of interfaces. In turn this suggests that producers should not be closed to the standardisation of systems, in order to not additionally delay the spread of smart metering (Figure 3). 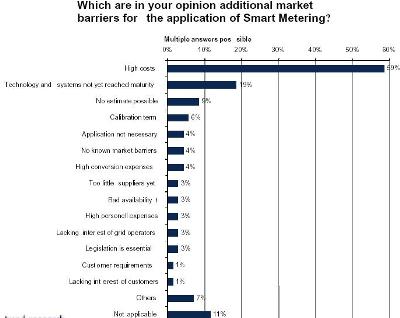 For energy suppliers with smart meters, the main barriers are the high costs and low customer acceptance. The costs in metering increase due to smart metering, without generating noticeable added value for customers.

It has becomes obvious, however, that the application of smart metering has gained more importance in the last two years. In large part this is due to the further development of metering technology and the opportunities for cost savings and accordingly the generation of additional revenues as a result. Currently the so-called third generation of meters is being used, which contains numerous new functions and additionally has become more reliable.

The main communication technologies within smart metering currently are powerline – from meter to concentrator – and GSM – from the concentrator to the source system of the energy supplier. Thus the value of GPRS is increasing. Already more than half of the energy suppliers with smart metering that were interviewed use this system for billing based on packets and volumes.

THE FUTURE – AN EXPANDED PRODUCT AND SERVICE PORTFOLIO
In Germany approximately 70 percent of the organisations that were interviewed have a smart metering application in pilot phase. However, producers interviewed were unable and did not wish to commit themselves to specific products and services that may be offered in the future. One interviewee summarised this succinctly as follows: “Either smart metering is further ahead than people conceive it to be today, or in ten or 15 years there will still be Ferraris meters in use. The general legal conditions have to change, but the question: ‘How do I want to implement it?’ is important as well.”

This insecurity leads to the fact that an expanded range of services is not yet being offered, or that the offers are not – yet – being communicated outside the organisation. Many projects, according to the survey, are still under discussion. This suggests that the pilot projects, which more often than not are set up by the grid division or grid company, are not being evaluated and incorporated in detail at the distribution level.

A possible application of smart metering could be in the areas of load profile generation, load management and invoice printing. To the question which other products and services could be offered based on the data read-out, 30 percent of the interviewed energy suppliers without smart metering could not find an answer, while almost 20 percent named energy consulting services and energy optimisation, an expanded tariff offering and the possibility of remote disconnect. 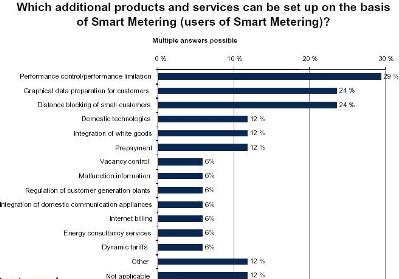 Figure 4: Other products and services that could result from smart metering (Source: trend:research)

For the interviewees, offers of graphical data presentation for customers and the remote disconnection of small customers are also conceivable. In pilot projects, these opportunities are already under test. In the long term, applications within the domestic environment, the integration into white goods or prepayment is also conceivable. These aspects transcend by far the subprocesses of metering and measurement and the supervision of the measuring point; in principle, with smart metering expanded services via the access point “meter” can be utilised. Services in this area could address customers as well as company-owned service areas such as accounting and load management.

The results of the survey show that the application of automated technologies in line with new requirements and changing legal conditions is becoming more and more interesting for energy suppliers in Germany. Energy suppliers expect from metering, and therefore also smart metering, a significant shortening of the meter reading and billing cycle. Smart metering also allows for an extensive integration from the meter reading processes to the accounts receivable processes, smart grid, energy generation, trade or procurement.

With a comprehensive area-wide application of smart metering technology, costs can be reduced in the long term and the current low profitability will no longer constitute a market barrier for energy suppliers. According to the interviewees it will take approximately five to ten years before the application of smart metering in Germany begins to be implemented on the scale of Enel in Italy. Pioneers in this process will in the future continue to be the large suppliers, acting jointly with some active combination utilities.