Smart meters, AMI and AMR have created a lot of interest in the past few years. One of the driving forces has been the EU Directive on energy end-use and energy services, together with market liberalisation and a general trend for energy saving and environmental concern by consumers. This has created a demand for interoperable solutions for meter reading, and a unified approach for the different media (electricity, gas, heat and water).

The new Open Metering System (OMS) specification has been developed to meet this demand. Leading meter manufacturers and technology providers in Europe have joined the effort to create this new open standard for metering. Earlier this summer the three-part specification was released; an important milestone in the quest for metering standardisation. Further, the aim of the OMS group is now to make parts of this work into a European Norm.

INTRODUCTION
The work to specify an Open Metering System (OMS) solution was initiated by three associations of meter and communication manufacturers; figawa, KNX and ZVEI. The main goal was to define an open, manufacturer independent, interoperable, device and interface specification unifying the communication with electricity, gas, heat and water meters.

Working groups were established to write the detailed specifications, consisting of members from leading meter manufacturers and communication technology providers. A major milestone was met in July 2009 with the release of the three-part specification.

SYSTEM OVERVIEW
The specification defines a Multi Utility Communication (MUC) device, which acts like an intelligent data concentrator between the automated meter management (AMM) back office system, and the metering and actuator devices. The MUC can be integrated into a meter (typically an electricity meter) or it can be a stand alone unit (Figure 1). 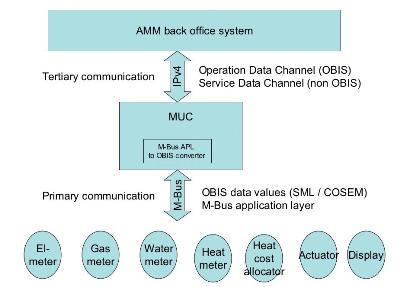 The tertiary communication is between the MUC and the back office AMM system. Accordingly, the newly released specification consists of three documents, defining the different parts of the system: Volume 1: General Part, Volume 2: Primary Communication, and Volume 3: Tertiary Communication and MUC.

The topology of the system is like a tree structure (Figure 2). The AMM back office system is connected to several MUCs, and each MUC can support many meters. There are several options for the installation. In one scenario each apartment has its own MUC, and all meters in the apartment are connected to this MUC. Home display units can be connected to the MUC for displaying consumption data.

Another scenario is where the display unit gets consumption data from an internet portal to the AMM back office. Further, one MUC does not have to be dedicated to serving meters in only one apartment, but can serve any meter within range to reduce the number of MUCs. 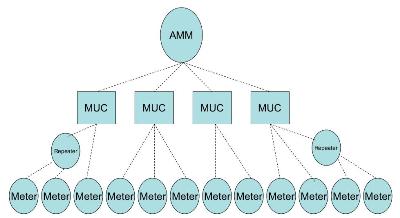 Wireless M-Bus modes S and T can both be used, for either one-way or two-way communication. The T-mode, with a data rate of 100 kchip/s ensures very short communication times and hence the lowest possible current consumption, while the S mode gives somewhat longer range.

DATA FORMATS AND APPLICATION LAYERS
The specified data format is OBIS (Object Identification System) coded values sent over a DLMS/COSEM (Device Language Message Specification/Companion Specification for Energy) or SML (Smart Message Language) application protocol. But the unification of reading different meter types also means that the system must handle different data formats. In the primary communication from the meter to the MUC, both OBIS and non-OBIS data is allowed. The wired/Wireless M-Bus link to the meter therefore supports both OBIS (SML or COSEM), as well as the M-Bus application data format (EN 13757-3 with DIF and VIF codes). The MUC will translate the M-Bus application data format into OBIS before it is sent to the AMM on the operation data channel.

However, there is also defined a service data channel from the MUC to the AMM, that supports non-OBIS formatted data as well.

METER TRANSMISSION INTERVALS
Different transmission intervals have been defined for display information and billing purposes, depending on the meter type. Electricity meters should transmit at least every 7.5 minutes, gas and heat meters every 30 minutes, and water and heat cost allocators every 4 hours. The consumer display should be updated every 15 minutes for electricity, and every hour for gas and heat. Randomisation of the exact transmission time prevents repeated collisions of packet transmissions.

The frequent readings enable the use of tariffs, either for fixed periods, or even offline dynamic tariffs. The use of tariffs together with consumption displays in the home can be used to increase the consumer awareness on energy consumption.

PRIVACY AND DATA INTEGRITY
Some concern has been expressed in the public with respect to data privacy and security for AMR systems. In OMS security issues were recognised as essential to achieve legal and social acceptance for smart meters. The privacy has been secured by the use of strong data encryption. The AES 128 encryption standard has been selected for the Wireless M-Bus link, and ensures privacy for the consumer by preventing unauthorised reading of meter data, as well as securing data integrity for the utility company and protection for energy theft.

Each meter is equipped with a unique encryption key, which is only known to the utility. This key is transferred to the MUC when the meter is installed, over a secure TCP/IP link. The system also has mechanisms to scramble the data even if there is no consumption. Hence, it is not possible to detect that the consumer is absent, which has been one of the concerns. Also, this protects the system towards fraud by re-play of old messages.

The same mechanisms are used to protect gas valves and load switches from being operated unauthorised.

BATTERY OPERATION
One of the major challenges when adding communication to gas, water and heat meters is the current consumption, as these meters are typically battery powered. The OMS specification defines a radio protocol that allows for battery lifetime of more than 14 years.

Not only should the average current and the peak current be kept as low as possible, but also the duration of the current peak is critical. The current consumption of the radio part is usually the largest contribution to the overall consumption in the meter. The peak current being determined by the transmission mode power, and the maximum duration by the receive mode. Due to the physical nature of the lithium battery technology, it is not able to source a high current over a long time. A high current load leads to a large voltage drop due to increasing internal resistance, reduced capacity and hence shorter battery lifetime.

The Wireless M-Bus standard and the OMS specification have solved this challenge by defining a protocol that requires the meter to listen for, and receive, messages only in a short period after its own transmission. After such a transmit/receive sequence, the meter is allowed to sleep for 2-5 seconds. During this time the battery can “re-charge”.

WIRELESS M-BUS REPEATER
The definition of a single hop repeater for unidirectional meter transmissions (T1 and S1) helps to increase the geographical area one MUC can cover. Several repeaters can be installed in the same area, and a repeated message is marked in order to prevent multiple repetitions. A random time delay before the repeated transmission prevents collisions.

At the time of installation, the meter is typically set into a special installation mode, and will start to transmit installation requests (SND-IR). As a special support for an installation tool, every MUC and repeater which hears this call will transmit a message indicating that it can communicate with this new device. This SNDNKE message also contains the signal strength of the received meter signal. Using a handheld installation tool, the installer can immediately determine if the meter has access to the network or not. The actual binding between the MUC and the meter can be done from the back-office system, which can evaluate the signal strength from all MUCs that can support the meter, and optimise the connectivity and load for each MUC.

CO-EXISTENCE WITH NTA 8130
Metering devices operating according to the DSMR (Dutch Smart Metering Requirements) in the Netherlands have been in the market for a while. Therefore, during the work with the new OMS specification it has been assured that OMS devices can co-exist with devices for NTA 8130/DSMR.

EUROPEAN STANDARDISATION
Even though the OMS initiative has mainly been driven by Germany, the aim is now to integrate the OMS specification into the EN standards through the European Committee for Standardisation (CEN), to become a part of the M-Bus standard EN 13757. The TC294 technical committee has already been reassembled to undertake this task.

CONCLUDING REMARKS
The release of the new Open Metering System specification is an important milestone for unifying metering not only in Germany, but throughout Europe. The OMS reduces the risk for utilities investing in new AMR and AMM systems by securing that multiple vendors are supporting the same interoperable system standard.

The new OMS specification meets the urgent need for unified standards and system specifications, and is soon to become a European Norm. The release of the Open Metering System specification provides a complete solution for AMR/AMI and initiates a new area of interoperable smart meters.