Switching individual streets without losing sight of where the lights are actually on? Switching flexible tariffs? Billing consumption monthly? Not really hard for modern power utilities even if they do sometimes need a little nudge from lawmakers.

Since the beginning of 2009, the free power market for major customers consuming more than 100,000 kWh per year has been made a reality by law. The Swiss law making it mandatory to identify the source of electrical power had already been enacted in early 2005. Reason enough for any power utility to get ready for the future in good time. In the summer of 2007, Arbon Energie AG decided that new installations not only had to fulfill more stringent demands than the old Ferraris meters but also than the smart metering systems available so far. The Swiss were already thinking of incorporating as many of the functions as possible that would characterise smart grids in the future.

They chose AMIS, the Automated Metering and Information System from Siemens. It is a complete solution that arose as a further development of smart metering. On one hand, it acquires the data of households, special contract customers, and from the distribution grid structure and transmits it to the control centre. On the other hand, with this information, the distribution grid operator is able to optimise its own processes and offer its power suppliers and customers specific new services for better utilisation of energy – a two-way flow of information that already anticipates some of the characteristics of smart grids with their extensive information and communications technology.

OPTIMISED LOAD MANAGEMENT
Automatic remote reading of the meters and detection and billing of variable remuneration for the various tariffs or on-/off-peak load periods are already possible with smart metering. AMIS, however, additionally works with bidirectional data communication. This permits complex grid operation and the constant matching of power consumption and grid load.

This enables the power supplier to offer special tariffs depending on the grid load or time of day. It can also influence the power consumption of its customers during off-peak periods by switching tariffs, thus ensuring a more even grid load. All stages of the power supply up to the household meter can be automated in an integrated and clear way. Data about the grid state permit fast diagnosis of faults, thus minimising outage times. Distributed power producers, for example, for regenerative energy, can be integrated into the grid with billing. Moreover, the system integrates water, gas, and short-distance district heating in a uniform and transparent way.

In Switzerland, the law prescribes replacement of the multifunctional meters on the customer’s site every 10 years. Arbon Energie AG will complete this replacement way ahead of schedule thanks to the ongoing AMIS installation. The new multifunctional meters had already been deployed at 600 customers in the area supplied by the beginning of 2009. At that time, 300 load switching devices and seven data concentrators were already in operation in transformer substations. During 2009, the supply grid will be expanded still further: 1200 meters, 500 loads which devices and 12 data concentrators will be added. In the case of AMIS devices, it is enough to connect them; the devices configure themselves with the higher-level transaction server.

With the new AMIS meters, the company will be the first power utility in Switzerland to be able to bill its customers for the true energy consumption every month. Advance payments and subsequent adjustments, which have already been outlawed in some Scandinavian countries, are history. Both consumers and power suppliers benefit from the much greater transparency. By organising the load management by matching power production and consumption, the company is already getting ready for the margin squeezing competition that will begin with the completely deregulated power market.

FROM THE MULTIFUNCTIONAL METER TO THE TRANSACTION SERVER
In a simplified view, AMIS comprises four hierarchically stratified function levels: 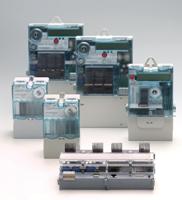 LOAD MANAGEMENT INCLUDED
All multifunctional meters have a slot for an M-bus expansion module which, when installed, conveniently permits control and billing not only of power consumption but also of the consumption of gas, district heat, and water.

In the case of larger loads such as boilers, load switching devices are installed that switch the loads according to a time programme or on a command from the load management in the control centre. In the event of complaints by customers, the multifunctional meters permit instant diagnosis from the control centre, for example, of whether a fault is the responsibility of the grid operator or attributable to the customer’s equipment. The control centre can also respond in a matter of seconds. Via the integrated two-way communication, switching commands can be transmitted and devices adapted to the requirements of the power supplier and grid operator by remote parameterisation.

If the meter is too far from the data concentrator, the multifunctional meter also automatically functions as a repeater, thus providing redundancy. For example, if the transformer fails, the field devices of an area supplied by that transformer can connect to another transformer. In this way, for example, any connections can be implemented in the low-voltage network for maintenance work.

The centralised network management system configures the telecommunications equipment and data concentrators much more efficiently than was possible by separate management systems. All parameters of the multifunctional meters are administered centrally in parameter profiles and coordinated with the customer contract data and higher-level IT systems. Redundancy at this level includes support of a “hot standby” concept in which the hardware and software are duplicated in two separate systems.

PRACTICAL DEVELOPMENT
Siemens developed the AMIS Automated Metering and Information System in a pilot project together with Linz-based Österreichische Energie AG. One practical advantage is the possibility of controlling power supply flexibly. Whereas previously, for example, the street lighting of the area supplied could only be switched on or off in unidirectional communication via the ripple control units, today the control centre can switch a selection of streets off or on, for example, to light up individual streets and squares for special occasions. The control centre receives feedback about the current switching states, but normally it will allow the load switching elements to operate autonomously according to a specification.

The system is real-time capable and permits energy consumption billing that is easy for the customer to understand. Load data can be stored for the previous 60 days. Functions not considered decisive for individual households today may become important in the future when flexible price structures encourage consumers to adjust their behavior.

Even if a customer wishes to change its power supplier to meet changing requirements, the necessary reprogramming can be performed from the control centre. This enables the customer to purchase power from where it is currently cheapest or depending on load conditions. The AMIS multifunctional meter is even able to transmit load data via the transaction servers directly to the billing system of the other power supplier.

AMIS ensures long-term investment protection through a modular expansion concept at every level of the system. Consequently, the meters with their interfaces for expansion modules represent an open communications platform over which both future home automation services as well as the integration of gas, water and district heating meters can be implemented. Furthermore, the DLC modem integrated in the terminal devices and data concentrators is realised entirely in the firmware, both with regard to the physical layer as well as the communication protocol. As a result, it can be simply adapted to future communications standards by means of firmware downloads.

PARTNERING WITH SIEMENS
Siemens offers complete solution packages for smart metering and distribution network automation: advanced metering infrastructure (AMIS) as well as meter data management system (EnergyIP) and IT integration. The proven and tested Siemens solutions make it easy to have an AMI running in shortest time and switch to smart metering in order to reap the benefits of trendsetting Smart Grid technology.