In the 1990s, Portugal became known as a “European good student” in some key areas concerning the enlargement and development of the European Union, such as meeting the convergence criteria for the introduction of the common currency (Euro).

The current global energy challenges that shape today’s European agenda, such as environmental sustainability, security and quality of energy supply, European energy market construction, and consumer empowerment, have led the way for a profound and structural change in Portugal. Let us take a look at how Portugal is addressing these issues.

Portugal has about 6 million low voltage costumers and an annual electricity production near 50TWh, with an installed capacity of about 10GW. Wind mills are popping up everywhere in the country, the largest solar plant worldwide has recently begun operations in the Alentejo region, and the 2010 forecast for renewable energy sources is about 45% of overall production capacity, almost doubling the European target for that timeframe.

Microgeneration is being actively promoted by the government through an appealing energy selling price and several deregulation measures. It is expected that a large number of consumer-producers will be attracted into the market in the near future. The first three sets of 2MW for microgeneration were fully awarded within the first few hours of the registry system opening. Clearly, Portugal is going “green”. 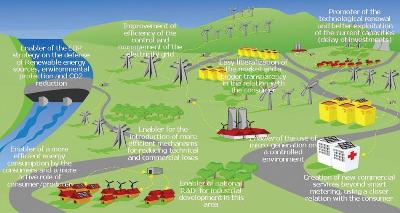 Unbundling in the energy sector is on the way, with the current value chain presenting four different layers, production, transmission, distribution and commercialisation (retail), where transmission and distribution are licensed monopolies.

The Portuguese and Spanish governments are jointly setting up an Iberian Electricity Market (MIBEL) aimed at enabling consumers from both countries to acquire electrical energy under an open competition regime from any producer or retailer operating in the Iberian Peninsula.

And most recently the Portuguese government and the Renault-Nissan alliance signed an agreement aimed at creating the conditions for the use of electric vehicles in Portugal.

But, as stated in an old Portuguese saying, “There’s no beauty without an ‘if’ …” If the changes that are underway in the Portuguese energy sector are to succeed, structural issues need to be addressed.

In the distribution network area the need for more efficient infrastructure, such as smart metering and smart grid technologies, is still struggling to move up the country’s political agenda. Although the Portuguese energy regulator (ERSE) issued a proposal late last year foreseeing a massive deployment of smart metering in the years to come, the expected electricity tariff increase associated with that investment raised dark clouds on the subject from the public and decision makers.

But still, even if a smart metering deployment is agreed upon in the end, several structural issues will remain unanswered. The most pressing issue relates to the ability of the distribution grid to operate efficiently in the near future, with thousands of microproducers connected in the LV end of the network. With the current grid standards, technology level, and operating procedures, this will probably entail overall service level reductions.

Thus, smart grid investments in Portugal should clearly be one of the most pressing and important issues on the country’s current energy agenda. 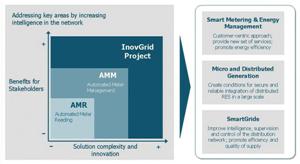 INOVGRID PROJECT VISION
In this changing context, the Portuguese distribution network operator EDP Distribuição (EDPD) has launched a strategic initiative, the InovGrid project, with the objective of transforming the distribution network in order to address the emerging challenges that the company and the electric sector are facing (Figure 1).

The project positioning, as more than a smart metering initiative (either AMR or AMM), is set to be a new way of managing and controlling the distribution network, introducing new forms of “intelligence” in the multiple network layers and progressing towards the smart grid nirvana.

The technical solution is based on a three level hierarchical architecture (producer-consumer, MV/LV substation and central management/control) handling both commercial and technical information (Figure 3).

The lower level component of the solution is the intelligent home energy gateway (Energy Box), which on top of smart metering and remote power control will have functionalities related to demand side management, microgeneration control, home automation and other value added services. This component will be remotely upgradable by firmware. 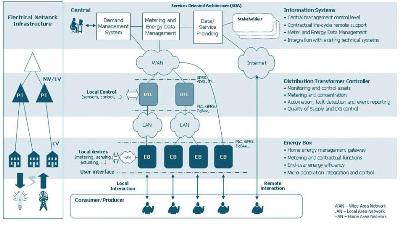 At the intermediate level, the solution will have a main intelligent component (Distribution Transformer Controller) housed at MV/LV substations, which besides being responsible for managing the communication with the energy boxes, will act as an intelligent device for distributed energy management, providing services such as transformer station control and automation or fault detection. The distribution transformer controller is being designed to be upgradable with more functionality, in accordance with what is needed or what is available.

The solution’s upper level will be composed of the core information systems, namely the central management, energy data and SCADA/DMS systems, which will support activities such as operation and energy distribution control, order dispatching, data collection, energy balancing, alarm and network monitoring.

The solution communications will link all the layers and interfaces in the form of WAN, LAN and HAN networks. The main technologies considered for the early stages of the project are narrowband PLC and GPRS/GSM. Other technologies like “intermediate band” PLC, ZigBee, RF and Bluetooth are on the solution radar.

Expected benefits
The accomplishment of the InovGrid project’s vision will have a major impact on the foundations of the national electricity sector and is expected to provide significant benefits to the sector’s stakeholders.

EDPD will benefit from a reduction of operational costs due to reduced execution costs for service orders and readings. It is also expected that there will be a reduction of losses in the network, through the introduction of additional sensors in the intermediate network levels and intelligent systems collecting and analysing data. Other potential benefits include optimised management and control of the network, optimisation of investment in the network due to a deeper knowledge of the energy flows, and a reduction of the maintenance costs due to the availability of data that enables more efficient (risk-based) management of preventive maintenance. Overall, it is expected there will be an increase in the reliability and quality of the energy supply, coupled with the enabling of generalised installation of microgeneration keeping the network safe and controlled.

Retailers will also benefit from the InovGrid project. They will enjoy the possibility of offering new services to clients such as commercial integration of microgeneration, or value added services such as home automation. Also, retailers will gain the ability to offer innovative price plans based on more flexible tariffs and elevated granularity of readings or even based on individual consumption profiles.

Consumers are expected to be the most significant beneficiaries from the new system. A reduction of their energy costs through an active role in the management of energy consumption is foreseeable. Also, consumers will benefit from the possibility of gaining access to new services, new ways of energy charging and new price plans. Finally, smart grid development will create the structural possibility of large scale rollout of microgeneration with the inherent economical compensation.

Regulation benefits are also to be expected, mainly because the smart grid system will increase the market’s transparency and competitiveness.

At the end of the day, the overall national economy is expected to benefit from the InovGrid project. For example, the modulation of the demand and its alignment with the offer will result in benefits for energy efficiency, and the resulting smoothing of the consumption peaks will allow significant savings of investments in the distribution and transmission networks and production infrastructures. Another example is the enabled profusion of microgeneration, which will allow greater exploitation of endogenous energies and will reduce the dependence on imported fossil fuel resources. Also, the InovGrid project approach, promoting the creation of industrial projects and national competence centres in emerging technologies, has a strategic fit with government priorities for Portugal’s national economy.

Development approach
Without an off-the-shelf technology offer currently matching the InovGrid requirements, EDPD decided to launch the initiative by creating an innovation programme capable of specifying, prototyping and testing the new architecture, its components and overall interoperability. The resulting solution (currently in the prototype phase) will have a reality check with a large scale pilot of up to 100,000 customers, preceding the full rollout scoping the 6 million customers.

In parallel with the technical development of the solution, EDPD started the development of a business case that should prove the economic viability of the global initiative, and also provide the project with some economic boundaries and guidelines (e.g. component target prices) that must be met, in order for it to achieve the required payback criteria.

The business case identifies and quantifies the benefits and costs for all the stakeholders, foreseeing a resulting base framework for the global project funding. Additionally, the study includes a comparison between the avant garde InovGrid scenario and the more conventional AMM scenario, highlighting the incremental value effectively contained in the more ambitious approach.

Furthermore, the concepts and philosophy behind wellknown AMM projects occurring in Italy (through ENEL’s Telegestore), Ontario – Canada, or California, are moving a step further and will also integrate smart metering in a smart grid approach.

In this sense, EDPD and its partners are currently undertaking a very distinctive and comprehensive initiative in the European electricity spectrum, taking into consideration the InovGrid project ambition, its targeted integration level and its foreseeable deployment timeframe.

Quoting a well known movie “… let the force be with them…”