The Commission for Energy Regulation (CER) is the independent body responsible for overseeing the liberalisation of Ireland’s energy sector. From February 2005 onwards all customers will be free to choose their supplier. As part of the liberalisation process, metering has in recent times become a topic of interest for the CER. This article addresses two particular issues: first, the introduction of a prepayment meter system to the electricity market; and second, the relevance of meters capable of supporting time-of-use (TOU) tariffs.

At present there are 24,000 domestic customers using prepayment meters in Ireland. These are known as token meters and have been in use since 1990. Generally they are installed in situations where the customer is experiencing payment difficulties, and are not available on request. Furthermore, the meters are only available to customers of the incumbent supplier, ESB Customer Supply.

With the opening of the electricity supply market in mind, the CER was of the view that the introduction of a prepayment system available to all suppliers in the market needed to be considered.

For suppliers, prepayment meters can be a very useful tool in avoiding bad debts, as well as being an opportunity to improve customer service by offering them to customers on request. The expansion of the existing prepayment system did not seem to be an optimum solution. The existing token meter system, which brings no operational savings, imposes costs which are not recovered from the customer; market opening is an opportune time to replace them with a modern, cost-effective system.

Following the consultation process, the Commission established the Prepayment Meter Working Group. This group comprises ESB Networks (in its role as distribution system operator, or DSO, with responsibility for all metering issues) the MRSO (the data processing group within the DSO) and suppliers.

GOALS OF THE WORKING GROUP

The type of meter employed on customer sites is generally a matter for the meter operator; the supplier is only concerned that the data is accurate and processed in a timely manner. Prepayment meters differ, however, in that the meter and technology installed directly impact on what services a supplier can offer customers. The purpose of the working group was therefore to establish what services and what type of technology suppliers wished to see introduced to the Irish market. Following this input, and input from the data processor MRSO, the DSO would be in a position to introduce prepayment meters to the market.

While the workings of the group are still at an early stage, a number of issues have arisen. There is agreement that due to the size of the market and the anticipated uptake, it would seem efficient to have only one system in operation. Secondly, the suppliers have expressed a desire that any vending arrangements would be made for all suppliers on a collective basis. The Commission strongly supports this, as it removes any potential barrier to entry. With new suppliers entering the market, and initially small customer bases, it would not be feasible for each supplier to establish arrangements for nationwide vending points. Making such arrangements on a collective basis will ensure that prepayment can be offered by all suppliers, even those with a relatively small customer base.

The Group intends to make site visits to suppliers in Northern Ireland and the UK to get a first-hand view of existing systems. Following this there will be a process for manufacturers to make submissions to the group, and finally a tender process. The final decision of the Group will lead to a pilot project of the chosen system. If the pilot project is successful, it will be followed by a larger scale rollout of the system. 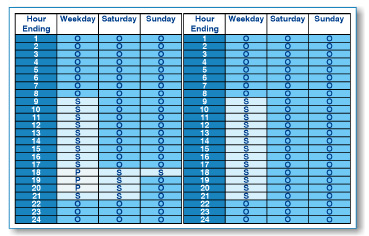 As with all aspects of its work at present, the CER keeps in mind the prospect of moving towards an all-island (Ireland and Northern Ireland) electricity market in the future. This consideration also applies to the prepayment issue. Furthermore, prepayment meters may offer a useful insight into the potential of TOU tariffs for the domestic sector, provided that the technology introduced is capable of supporting such tariffs. Finally, the Commission is also keen to apply the experiences gained through the electricity prepayment working group to the gas sector.

In July 2004 the Commission published a paper entitled “Electricity Tariff Structure Review: Alternative Tariff Structures” (CER/04/239). Amongst other things, it looked at the adequacy of existing tariff offerings and suggested changes that could be made to better reflect current customer characteristics and metering. Many of the existing tariff elements, including those deployed by ESB Customer Supply, had been formulated over the years as a result of available technology.

Developments in metering technology which could facilitate a greater variety in tariff structures now or in the future were considered. In particular the Commission examined the use of tariffs which vary with time across the day (or season) to more accurately reflect the costs imposed by different usage patterns by consumers. Critical to the introduction of any such tariffs is the availability of metering that supports TOU tariffs.

PROS AND CONS OF TOU

The Commission favours the introduction of TOU tariffs for a number of reasons. Primarily, TOU tariffs are fairer than flat tariffs; customers who use electricity at system peak hours, when generation and distribution costs are higher, will end up paying more for their electricity during those hours. Where customers use their electricity mainly in off-peak hours, they will pay lower charges at those times. In essence what this means is that customers who contribute most to the cost of the system will result in paying more for their use of the system.

However, there are a number of issues associated with TOU tariffs that impose extra costs. First, TOU meters are more expensive than standard single register meters. Secondly, data collection requirements are more onerous, as readings are required for each period rather than a single overall meter reading associated with flat tariffs. Thirdly, TOU meters are typically electronic; on a domestic level, electromechanical meters could no longer be used, and in the Irish context data collection methods would need to be revised. This would require the introduction of electronic meter reading devices.

The resulting question is: for which customer groups are TOU tariffs appropriate, bearing in mind the costs involved?

A basic principle is that the benefits resulting from the introduction of TOU tariffs should be greater than the costs associated with the introduction of meters capable of supporting TOU. Where this is not the case, more advanced metering should not be introduced. Furthermore, in terms of a replacement programme, if the costs including the replacement costs outweigh the benefits, then TOU meters should only be introduced on a replacement basis. However, this can be complicated by the fact that a large-scale replacement programme will gain from inherent economies of scale.

In an attempt to address the question of an appropriate threshold for TOU tariffs, the CER carried out a provisional cost-benefit study. It compared TOU and electromechanical meters in terms of life span and unit and installation costs, to give an annual cost associated with each type of meter. The extra cost associated with the TOU meters was then compared to the efficiency benefits that TOU tariffs can bring. The benefits rise in line with a customer’s consumption level, and at consumption levels of approximately 5,000 kWh per annum the benefits were found to outweigh the costs.

This was an initial study to give the CER some idea of where such a threshold may lie. However a fuller study is required incorporating all associated costs of TOU meters, such as different data handling and meter reading processes. In addition, the threshold levels are sensitive to installation and unit costs; if these are driven down, the threshold level drops. Finally, it is of course difficult to confidently ascertain to what extent consumers will change their consumption patterns according to price signals. There are volumes of literature on this topic, each highlighting the impact of a number of particular aspects (e.g. income levels, climate, consumption levels, and price differentials between the periods).

It is the Commission’s intention that TOU tariffs will be introduced to the Irish market, on the regulated network and retail tariffs, on a phased basis. They will be introduced initially for the larger customers, where TOU-capable meters are already installed. Such tariffs will then gradually be applied to the lower consumption groups, down as far as the Commission deems it appropriate. At this stage it is difficult to say if TOU tariffs will be made available to the domestic sector, but if the cost-benefit analysis is favourable, they may be introduced as an optional tariff. If prepayment meters are in place that are capable of supporting TOU tariffs, this customer base may at some stage be used to gauge customer reaction to such tariffs on a trial basis.

Advances in metering technologies over recent years, particularly in terms of reduced costs, bring new opportunities for electricity and gas markets. As a regulator, we must ensure that these issues are examined, and if they are capable of delivering tangible benefits new technologies should be adopted. The Commission’s role is aided by the fact that there is only one regulated distribution company with responsibility for all metering issues. This avoids the pitfalls experienced in other countries associated with having many parties involved in various processes relating to metering (installation, reading, replacement, ownership, and so on). In terms of tangible benefits, prepayment meters bring choice to the consumer, while TOU metering enables delivery of more equitable tariffs, and may play a significant role in reducing peak time consumption.