One of the key activities of any smart metering project is to keep abreast of ongoing developments in other markets. This serves a number of purposes – it can provide ongoing reassurance that your decisions and products are in line with those of parallel projects; it is a great educational tool to understand the wide range of new opportunities that smart metering presents; and it can alert you to moves in the market and which products are finding favour.

Awareness and appreciation of international developments has certainly been a cornerstone of the ongoing Supplier Requirements of Smart Metering (SRSM) project being delivered for the Energy Retail Association (ERA) in Great Britain. The ERA represents the major domestic gas and electricity suppliers and the project has faced some unique challenges as a result of the exceptionally competitive retail energy market in Britain. Smart meters will need to be truly interoperable so that any supplier can interact with them. Smart meters will also need to accommodate and develop the mature and significant prepayment metering culture in order to provide these customers with the energy budget controls they are accustomed to.

As project architect for the ERA this involves maintaining a small project administration website for the members of the Association. Alongside documentation, risk logs and other project materials, it was requested that details of international exercises collected whilst developing the metering requirements be incorporated. The resulting table was a little underwhelming, so options were investigated to present the data in a more engaging way.

At the time Google had recently launched a feature allowing users to easily create and publish their own maps. Within a couple of hours it was possible to map a couple of dozen exercises and it seemed to be working well. Feedback from the suppliers was very positive, so the new map became an ongoing feature of the project.

Using the simple interface the map constrains one to – a basic HTML bubble – it has been possible to provide a lot of detail on some projects, such as those of PG&E and Enel, or just a couple of sentences where that is all that is available. It covers the largest projects down to smaller municipal initiatives. It also features entries about smart metering related legislation or regulatory policy.

Over time an ideal formula for a map entry has been developed. It will include a small banner graphic to the utility or party leading the project, which will link to their website; a synopsis of the project itself – the why, the how, the when, the costs; and any relevant links to technology suppliers or interesting materials. 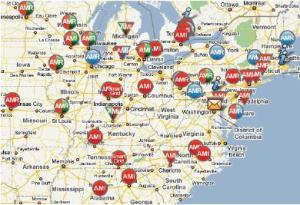 A busy corner of the Google map

Mapping a world of information
Information for the map is collected from a wide range of sources. Initially it came from the simple spreadsheet that was built throughout the project as information on meter functionality or interoperable solutions was found whilst developing the requirements documentation. Time was also spent collecting details from the internet on specific exercises, and many presentations from international metering conferences were scanned for details that could be added to the map.

There are now over 160 projects on the map, and updating it has become a regular weekly task. Meter-related syndicated internet news feeds, Google alerts set up with key words such as “Smart Meter”, “Open Way”, “ZigBee” etc., daily digests of related news stories and blogs, and meter, smart grid and communications mailing lists are all sources of information.

If you build it, they will come
Following a slow start – the map was created in June 2007 and it took two or three months to get 1,000 hits – traffic began to pick up, and emails from visitors began. The feedback was always positive, and information began to arrive from people wanting to make sure their project was included.

Around the turn of the year, once the map had a reasonable collection of data and had been visited by five thousand visitors, it was decided to publicise it in key places. It is listed on the Wikipedia smart metering page, it has been part of the Frequently Asked Questions section of the BC Hydro website for several months, and of course Smart Energy International picked up on the map and featured it in print and online.

On average, three or four emails a week are received from colleagues across the world interested in the map, or with details on their project, or looking for some help on specific smart metering subjects. Far from being alone, there is quite a collection of individuals out there looking for this kind of data to support their own projects and initiatives.

Very detailed spreadsheets of information have been provided from Landis+Gyr about their numerous projects in Scandinavia, a discussion has been held with a vice president of Elster Integrated Solutions in the US, a graduate student could be helped with her dissertation on demand response and smart metering, and a very pleasant lunch was had in London with a fellow smart meter geek from New Zealand who got in touch as a result of the map.

Specific maps have been delivered for colleagues in other markets based on their requirements, and their information has been relayed into the main map. As a result of a communications workstream for the SRSM project a specific map showing which low power radio solution is being used in a range of smart metering projects has also been developed. 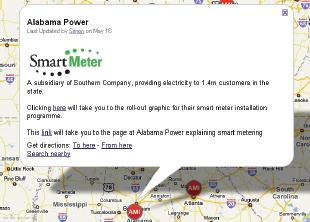 Example of a map entry

God bless Google
One of the benefits of using a Google map, apart from the lack of cost and bullet-proof service standards, is that Google themselves keep rolling out new features to improve the service. Whenever these are announced, they are considered to help improve the smart metering map.

Hence when Google announced it was possible to use custom markers, the map was updated with a set of custom markers to allow visitors to distinguish between AMR, AMI and smart grid activities; to show whether the project is a trial or a full implementation; and what types of metering are involved.

International colleagues have been added as collaborators on the map, a relatively new feature from Google, enabling them to add their own information.

Google has also recently implemented simple web forms, enabling requests to contributors to complete one for their project. This presents the data in a structured format and hopefully will mean that a more complete picture can be presented for each exercise.

We look forward to the day when Google makes it simple to export all of the data captured within the map to a format that would allow making a downloadable document covering all of the projects. It will also help with what should be the next step for the resource.

Moving to the next level
One request repeatedly received from correspondents who find the map is for more detail, either on particular initiatives, or for a global or continental view of developments.

As useful as the map is, it cannot reasonably hold pages of information on each initiative, plus it is not straightforward to make sure that all of the detail remains current. It is only as good as the information that can be accessed, and unfortunately this means it is dominated by projects where details are available in English. While Google alerts can be set up for “Zähler” and “Compteur” and other translations of meter, even then it will not be possible to present the information as well as someone closer to the projects in other countries.

The map itself was not developed with a clear plan, but has evolved and will continue to evolve. It is planned to create a resource based on what has been learnt from that evolutionary process. It will be possible to take the underlying data from the map, and publish it on a collaborative, Wikipedia-style site specifically for advanced metering.

The ideal would be to provide a resource that will allow the user to investigate an individual project, or to focus on a specific territory, or even on an aspect of smart metering – such as communications technology or functionality or even specific metering products. It is a resource that the ERA is interested in, and hopefully a framework will be up and running in the next couple of months.

Put your project on the map
Have a look at the map and if you can’t see your project or the information is out of date or incorrect, the link to the web form may be used to send the details to be updated.

The map may also be used on other websites, using the ‘Link To This Page’ link.

The smart meter map is at http://tinyurl.com/smartmetermap