[Yogesh Nama][October 25, 2006]German Chancellor Ms Angela Merkel was involved in the meeting between German utilities and government parties. She said that the most important thing from her perspective was that the price increases were not formulated as a result of monopolistic structures. The energy tariff for residential customers has been increased by 21% in the last four years, but surprisingly the tariff for industry and bulk consumers remains lower and moderate. 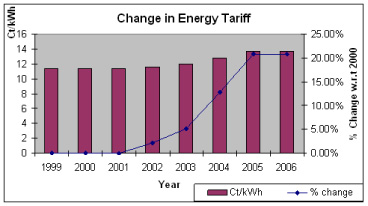 The announcement of the increase is regarded as antisocial in a situation where utilities are already registering 10 billion euro profits. Industry analysts also view this step as a major negative consequence of energy market liberalization. Meanwhile the government is promoting the use of non-conventional energy (renewable energy supply) and has provided several concessions on the use of solar and wind energy.

The ever-increasing tariffs have forced consumers to use alternative energy – for example people are returning to the traditional method of using wood to heat their homes. The many trees that were brought down during the recent tornado made plenty of dry wood available, allowing consumers to save on energy costs.

It also helps that in general the German people are very conscious of the need to save energy; the use of energy efficient devices is becoming popular, which will strengthen the market for energy-efficient home appliances.

However, the experience of other markets – that when energy becomes unaffordable it leads to tamper and other problems – should be borne in mind.

The demand for testing of energy meters has increased multifold in the last year. Trends indicate that onsite testing is gaining more and more momentum, and that today it involves much more than a simple test – it also includes testing of instrument transformers, burden, and power quality measurement, for example. The demand for testing is initiated by both consumers and utilities.

This trend will affect the following components:
• Changes in the design of instrument transformers
• New metering tariffs which consider the power quality
• New meter capabilities (for example monitoring and recording power factors and limits, reactive and apparent measurement, harmonic measurement, and the recording of import/export energy).

Meter reading for domestic consumers in Germany is carried out once a year – and even then the meter is read by the consumer himself. He receives a post card, fills in the energy reading and sends it back to the utility. This means that domestic consumers pay bills based on estimated consumption for 11 months, and the final reconciliation takes place on the basis of the post card reading. So far this system has worked well, and has eliminated the need for AMR.

The newly-developed household meter – the so-called EHZ meter – has lost its appeal in Germany due to its technical limitations and high cost. The song which was on top of the charts last year is no longer heard anywhere in industry. Very limited numbers are being installed as pilot projects, and it seems as if this initiative may have gone into cold storage.